Why is Turkey so worried about border guards?

A CIA-trained border force in northern Syria would mean the institutionalization and legitimization of a Kurdish-led military body on Turkey’s border. 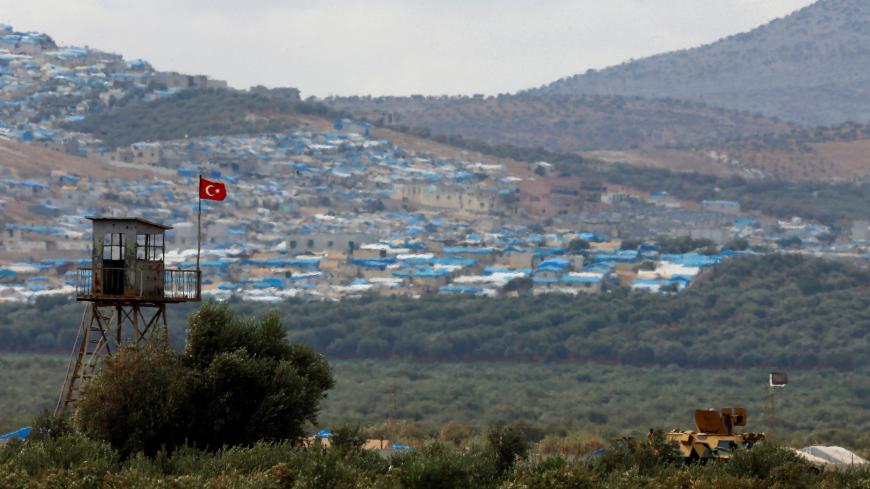 After the Pentagon announced Jan. 13 the creation of a 30,000-member, US-backed Syrian Border Security Force (BSF), Ankara escalated threats of an operation against the Kurdish-held city of Afrin in Syria. The BSF, which will patrol the Syrian borders with Turkey and Iraq, has added fire to the already tense relationship between Ankara and Washington.

There are two issues that are triggering Ankara. First, although Washington said they are not setting up a new army, the US-trained guards that will be serving on Turkey’s border with Syria will be from the Kurdish People's Protection Units (YPG) — the largest group within the Syrian Democratic Forces (SDF). Second, the force, which will go through a training process with the CIA, will be more institutionalized and have further opportunity for achieving legitimacy. The creation of a new force means the US-YPG partnership will not end with the collapse of the Islamic State (IS), as Ankara had hoped. In his last phone conversation with President Donald Trump, Turkish President Recep Tayyip Erdogan was led to believe that US assistance to the YPG would end. According to Turkish Foreign Minister Mevlut Cavusoglu, Trump told Erdogan, “I gave instructions. No more weapons will be delivered.”

Referring to the phone call, the White House said that Trump had informed Erdogan of “pending adjustments to the military support provided to our partners on the ground in Syria."

The United States then assured the YPG in their private talks that they would not leave the region until a political solution was found and the BSF was set up.

The first reference to the BSF came Dec. 22 from Gen. Joseph Votel, the head of the US Central Command. Turkey’s state-run Anatolian Agency reported on Jan. 6 that the CIA was training this force at Sabah al Hayir camp south of Hasakah near the Tishrin Dam on the Euphrates. In response, Turkey’s Foreign Ministry summoned US charge d’affaires in Ankara Philip Kosnett.

On Jan. 13, Col. Thomas F. Veale, the spokesman for the anti-IS coalition, said the force will be 30,000 strong; 15,000 will be selected from the SDF, and the rest will be recruited from Arab-dominated locations. The Kurds will serve on the Turkish border, and Arabs will be based along the Iraqi border and on the Euphrates River.

While the United States did not call the new force an army, some Kurdish officials did not hesitate to call it the Northern Syrian Army. For example, on Dec. 30, Siyabend Welat, the commander of the Self-Defense Forces in northern Syria, said a Northern Syrian Army will be set up to defend the border. Two training bases have been prepared for this force, which will have Kurdish, Arab, Assyrian, Chechen and Turkmens elements, and new training centers are to be opened at Tabka and Deir ez-Zor.

For Ankara, this new army is further justification for its intervention in Syria. YPG spokesman Nuri Mahmoud in a statement to Al-Monitor said this was not a new army in the making but an effort to institutionalize the Syrian Democratic Forces (SDF) as part of the strategy developed for the post-IS era. Mahmud said, “We fought against terror together with the US and Russia with a common strategy. IS has nothing left. Its remnants are terror cells that threaten internal security. We can’t ignore the very dangerous ideology they left behind. We are developing a strategy for the post-IS period. As much as dismantling their cells, preventing border infiltrations are also important. Our training program is a part of this strategy. We gained important experience in combating terror. We are now institutionalizing it and the US is helping.”

About Turkey’s declaration that it won’t allow a terror army, Mahmoud said, “Turkey is using this border force as an excuse to attack Afrin. Training of our forces is nothing new. There is no threat against Turkey from our border. Turkey is attacking Afrin to prevent the Syrian regime’s attacks against Idlib. From the outset, we have been defending our borders. Because of our defense of the border, our people succeeded in setting up all components of a self-government. The government in Turkey doesn’t want our democratic model to be seen. They first used proxies against us. When that failed, they decided to attack themselves.”

While officials in Turkey strongly emphasize that the training is given by the CIA, the Kurds are avoiding being associated with the CIA. Asked about the role of the CIA, Mahmud said, “Let’s not name the CIA or Pentagon. This is a training support by American forces.”

A Democratic Union Party (PYD) official who is working to create a federation in the area liberated from IS told Al-Monitor, “Although border guards is not a new issue, it is still being used. We control the border anyway. We already have many checkpoints and border crossings. We are only reworking the structure of the SDF. Why exaggerate?”

According to this PYD official, the SDF is being reorganized because of undeniable performance differences among the SDF’s Arab elements in the struggle against IS. If the SDF is not reshaped as a regular army, these divergences can become internal conflicts, which the regime can then exploit. That is why some SDF forces are now being reorganized as forces to combat terror, while others are being trained as border security forces.

According to Kurdish sources, the proposed BSF will not change the reality of the border — that it is under de facto YPG control. Kurds control nearly 700 kilometers (435 miles) of the 911-kilometer (566-mile) Turkey-Syria border. The Fish Khabur-Semelka and Yarubiya-Rabia border crossings are in the hands of the autonomous body. Many checkpoints along the border at Kobani, Qamishli, Deriq, Derbesiye, Tell Abyad and Afrin are also controlled by the YPG.

But the gradual institutionalization of the de facto situation bothers Ankara. In addition to the military support the United States gave in the fight with IS, the United States' recognition of a group that Ankara sees as a terror organization is considered to be a step toward recognition of the autonomous body. The real fear in Ankara is the legitimization of the de facto situation. This is why Ankara’s concerns escalated when news came that a joint coordination center at the border was set up between the SDF and the Iraqi army.

The question now is whether the United States will politically recognize the de facto structure in northern Syria. The PYD official said, “There are some signals in that direction. A large delegation that will include US Congress members will soon visit northern Syria.” That US delegation actually visited northern Syria recently and held meetings with Kurdish officials.

On Dec. 29, US Secretary of Defense James Mattis told journalists, “You'll see more US diplomats on the ground,” revealing the United States' intention of getting the State Department involved in addition to the Pentagon and the CIA.

As Turkey’s intention to intervene in Afrin became clear on Jan. 17, the Pentagon made a statement obviously designed to lower tensions: “The US continues to train local security forces in Syria. This training is designed to enhance security for displaced persons returning to their devastated communities. It is also essential so that [IS] cannot re-emerge in liberated and ungoverned areas. This is not a new ‘army’ or conventional ‘border guard’ force.”

This statement did not alleviate Turkey’s concerns, as the United States is not ending its military assistance to the YPG or terminating the BSF program as Ankara demanded.