Turkey’s president allows criticism of the country’s religious authority as long as it serves his purpose. 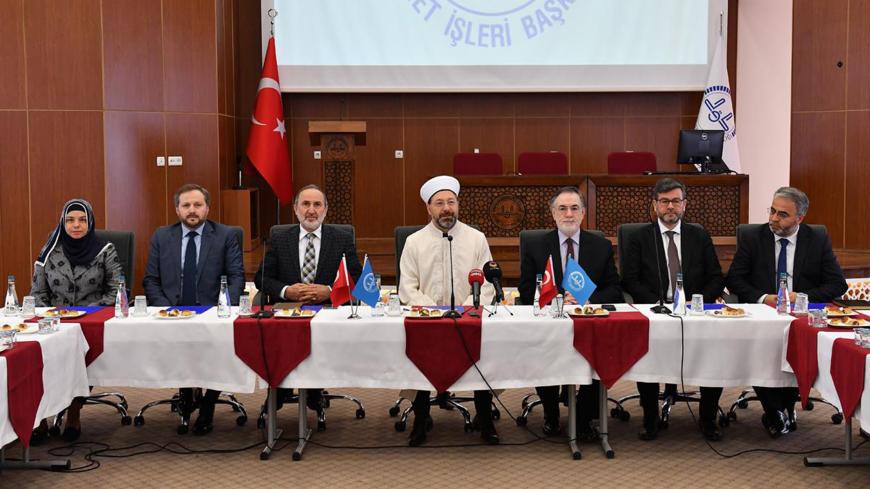 Director of Religious Affairs Ali Erbas (C) is seen during a meeting between Diyanet and members of the presidency in an image uploaded Feb. 23, 2018. - Facebook/diyanetb Press

Diyanet, Turkey’s Religious Affairs Directorate, has become one of the most popular trending topics on social media lately. On Feb. 3, Diyanet’s latest religious decree caused an uproar. On its high-traffic, interactive web page — where the public can post questions and religious experts share their replies — a controversial topic recently appeared.

The question was simple, but odd: “Is it acceptable to eat with the left hand?” The expert's answer, based on a well-known saying of the Prophet Muhammad, advised Muslims to eat and drink with the right hand and to teach their children to do the same because the “devil eats with the left hand.” On YouTube, one can find several Turkish Islamic leaders speaking about this issue. The public was angry about the response and asked about people who are born left-handed or have a missing hand or arm. The Islamic decree does provide room for exceptions for medical reasons.

Yet Diyanet promptly became a target of Turks' anger and sarcasm. For example, the Hurriyet daily newspaper’s veteran columnist Ertugrul Ozkok joined in with a satirical piece in which he wonders: When Earthlings eventually travel to Venus — which rotates in the opposite direction of the other planets — will it be permissible to eat with the left hand?

It is interesting that in Turkish, the verb to "to eat" can also mean to intrude on someone’s belongings or rights. Ismet Ozel, a prominent Islamist poet, penned the famous line, “To be a transgressor has not received as much attention as eating with the left hand in this country." That truth has been widely quoted lately.

But during this hoopla, transgressions haven't gone unnoticed. The public's anger has extended to one of the most pungent criticisms of Diyanet: why Diyanet has not spoken out against corruption, nepotism, unaccounted-for government practices and even the directorate's own exponentially growing budget. Murat Muratoglu, a Sozcu Daily columnist, said, “The budget for the Education Ministry increased 8.8%, while Diyanet's rose 13.2%. … Now Diyanet’s [2018] budget is at 7.7 billion liras [some $2 billion].”

The anger hasn't ended there.

On Feb. 12, news broke that one of the best-known imams, Ihsan Senocak, had resigned from Diyanet. Senocak had been suspended in November after controversy over his position that women who wear pants are sinners destined for hell. Then in February, Senocak advised that a man should refrain from kissing the hand of his young mother-in-law because it could lead to temptation.

It's not just these social and cultural commentaries that put Diyanet in the line of fire, but also its involvement in politics. In February, Diyanet's director harshly criticized the United States for its alleged human rights violations in Iraq, saying it had killed “1 million civilians.” He added, “Our soldiers move slowly in Afrin because they adhere to Islamic stipulations. They make sure that not one innocent is harmed, and that is the rule of Islam. That is what Muslim soldiers must do.”

Could President Recep Tayyip Erdogan ask for a better ally?

These are only a few of the significant actions that — just in the first half of February — made Diyanet the target of angry social media users. As readers following Al-Monitor’s Turkey Pulse know, we share one or two stories about Diyanet every month, and the frequency of Diyanet news is much higher in the Turkish media. So why, in a country where the press is under strict controls, is bashing the highest religious authority permissible? Why are people being prosecuted for criticizing the Turkish-bashed Free Syrian Army, but not Diyanet?

Al-Monitor posed this question to senior members of the ruling Justice and Development Party (AKP) as well as scholars and Diyanet imams. The short and most common answer was that this is because AKP leadership uses Diyanet as a measuring tool to gauge public reactions.

But it goes beyond this crucial purpose. There are three more possible explanations why the AKP allows, encourages and sometimes even initiates Diyanet-bashing.

First, much of the time the issues generated distract the public’s attention from more substantial political issues. One senior AKP official told Al-Monitor, “If there are documents about corruption emerging from the United States or from within Turkey, the best [thing to do] is to distract the public. The safest way to do that without losing the Islamist support is to [pit] secular groups against pious Muslims.”

Second, criticism of Diyanet solidifies the AKP’s Islamist core. When Diyanet makes the news with some controversial edict, we see all the anger and resentment of secular groups come gushing out. These critics aren't prosecuted, but their reactions are recorded, filed and redistributed to pious groups to constantly remind them that if the AKP loses elections, secularists — who are depicted as Islamophobic — will target pious Muslims with a vengeance.

One pious sociology scholar told Al-Monitor, “I know wrongs have been done since the July 15 [2016] coup attempt against innocent people by the government. My conscience is heavy with the deteriorating human rights and particularly the suffering of the poor. But I have two teenage daughters who just started wearing the hijab and they see this hatred by secularists." She showed me some Facebook posts as examples. "I have to keep quiet about Erdogan if I want my kids to survive.”

The last and most important reason Diyanet-bashing is permissible is that it performs a role like that of the safety valve of a pressure cooker. So many segments of the population — from leftists, Alevis, Kurds and women to the Muslim Brotherhood — who dare to criticize the government or Erdogan and his family are censored, prosecuted and silenced. But criticizing Diyanet is allowed because even in the most oppressive regime, there are venues to vent.

Soon, Diyanet is also likely to become the forefront of a battle between Turkey and the European Union. EU member countries, particularly Germany, that host significant numbers of ethnic Turks fear that Diyanet collaborates with Turkey’s National Intelligence Agency to gather human intelligence not only in Turkey, but also in the EU.

The AKP skillfully employs Diyanet to mold public opinion, vent pent-up public pressure and solidify the Islamist base. There are possibly other purposes we can't discern due to the lack of transparency and accountability in Turkish politics.

But you can bet that the AKP’s high echelons consider any criticism against Diyanet as direct criticism against Islam and Erdogan. So even though Diyanet-bashing seems like a safe venue for angry AKP critics at the moment, it very well be providing a false sense of security.