Palestinians believe that recent legislation from the Knesset that applies Israeli education law to academic institutions in settlements in the West Bank is a step closer toward annexation. 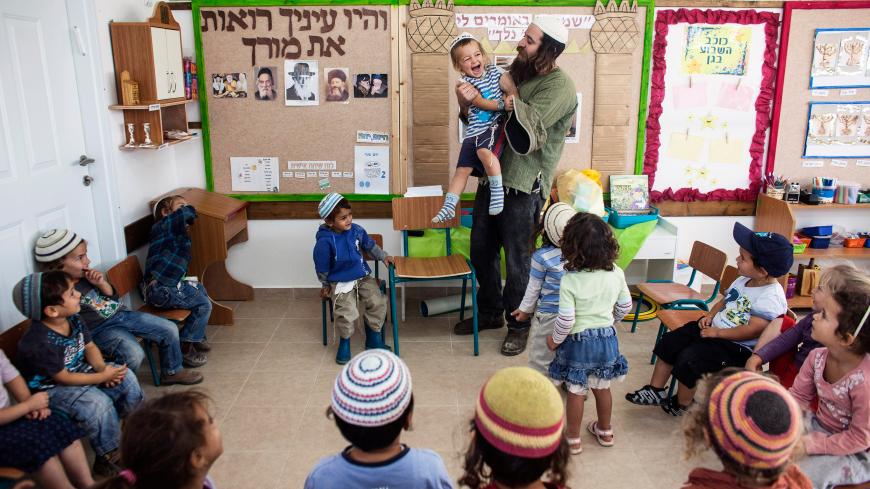 Natanel, a teacher, plays with a boy at a kindergarten in the unauthorized Jewish settler outpost of Havat Gilad, south of Nablus, West Bank, Nov. 5, 2013. - REUTERS/Nir Elias

GAZA CITY, Gaza Strip — The Knesset passed Feb. 12 a law applying the Israeli education law to academic institutions in West Bank settlements, which implies placing the institutions under Israeli sovereignty. The law's passage has angered Palestinians, considering it to be another Israeli step toward settlement annexation.

According to Haaretz, “Figures in the academic world have warned that the law could hurt the status of Israeli academic institutions and expand the boycott against it by opponents of the settlements. The law might break agreements Israel has made with the European Union to maintain a separation between academic institutions over the pre-1967 border and those in Israel proper.”

Antoine Shalhat, the director of the Israeli Scene Unit at the Palestinian Forum for Israeli Studies (MADAR), told Al-Monitor, “Israel had previously set up a separate education council under the auspices of which academic institutions in settlements in the West Bank were placed. Said council was separate from the Israeli Council for Higher Education. This is because it feared an expanded international boycott of Israeli universities, as the settlements and institutions there are illegal under international law.”

He added, “US President Donald Trump’s significant support for Israel — which was the most visible in his Jerusalem decision on Dec. 6, 2017 — seems to have provided Israel with a political cover to further its violations of Palestinian rights without having to fear an expanded boycott or any consequences at the international level."

Jamal Zahalka, an Arab Israeli member of the Knesset, told Al-Monitor, “It is another Israeli step toward the annexation of occupied Palestinian territories to Israel. The new law seeks to market the occupied territories as undisputed Israeli territories.”

There are 300 academics, including professors and scientific researchers, 15 research centers and around 15,000 students, including Arab citizens of Israel, at Ariel University, according to its Facebook page. The Times of Israel reported Jan. 25 that according to a study by the Israeli Council for Higher Education, the number of Arab students in Israeli universities grew from 26,000 in 2010 to 47,000 in 2017.

In a Feb. 13 statement, the Palestinian Ministry of Foreign Affairs and Expatriates condemned the law. It indicated that the law “is a part of a series of racist and discriminatory laws through which the Israeli government seeks to instill the rule of the far-right in the occupying state and bolster the influence of the right-wing ideology that is based instilling the occupation and increasing settlements in the territories of the Palestinian state.”

It continued that the law “is a part of a professed occupational policy designed to gradually annex large parts of the occupied West Bank to the occupying state, and endorse and encourage the expansion of settlements in the occupied Palestinian territory.”

Mustafa Barghouti, the secretary-general of the Palestinian National Initiative, told Al-Monitor, “It is a very dangerous law that clearly points at the Israeli intention to annex settlements in the West Bank, which is contrary to all international resolutions criminalizing Israeli settlements.”

He said Palestinians will counter such a law via additional boycott campaigns at home and abroad, and added, “Such a law would pave the way for us to promote the academic boycott of Israel, by calling on the world universities to increase the boycott and prevent Israeli participation in international scientific and academic activities.”

Ibrahim Abu Jaber, an Arab Israeli professor of political science at An-Najah University in Nablus, told Al-Monitor, “It is embarrassing at the Palestinian level that Arab Israeli students are enrolled at [Ariel] University. This is because such a thing would bring said university international support, considering it to be an institution offering educational services not only to Israeli settlers but also Arab students.”

He said, “It could be also inevitable for Arab Israeli students to be enrolled at Ariel University given the financial temptations offered by the university, such as financial aid that would bring down tuition fees from 10,000 shekels [$2,870] to 1,500 shekels [$430] in order to encourage students to join its classes. This is added to the fact that it welcomes students with low grades."

The chairman of the board of directors of Zaytuna University for Science and Technology, Daoud al-Zaatari, told Al-Monitor that the university will be built on an area stretching over ​​146 dunums (36 acres) in Salfit governorate in three phases over seven years. The first phase would end in August with the first academic year starting in October.

He added, “As part of the quest to face Israeli settlements, Zaytuna University seeks to provide Arab Israelis with a national alternative for Ariel University.”