HaBayit HaYehudi leader Naftali Bennett, the only Cabinet minister to criticize Prime Minister Benjamin Netanyahu after police recommended indicting him, is preparing for the fight to lead the Israeli right in the post-Netanyahu era. 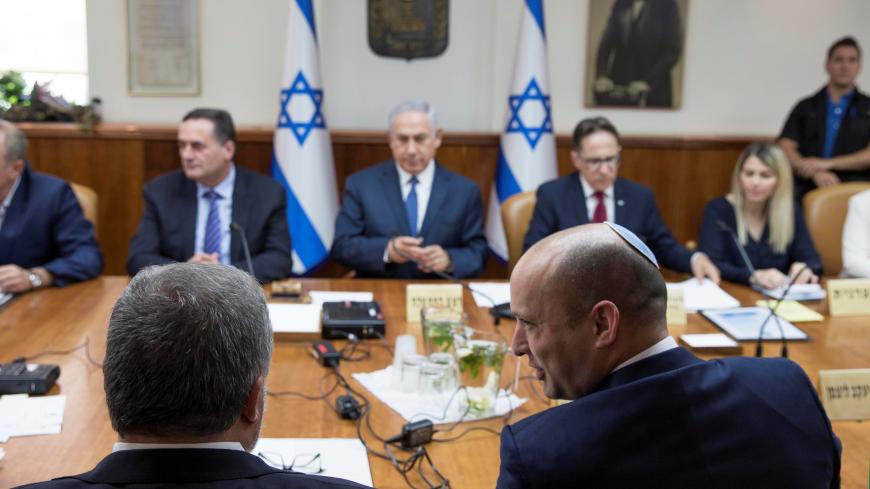 In case anyone missed the speech by HaBayit HaYehudi Chairman Naftali Bennett at the Local Government Conference on Feb. 14, he posted a video of it on his Facebook page along with a full transcript. The speech, delivered the day after the police recommended indicting Prime Minister Benjamin Netanyahu for graft in Cases 1000 and 2000, included criticism of Netanyahu’s ethics and behavior.

This was much more than an act of defiance by Bennett. It also went beyond an attempt to garner media attention, and by extension that of the public, as the most “bold and ethical” Cabinet member, while the other ministers gave Netanyahu their backing without reservations. It was, first and foremost, a cold and calculated opening salvo in the war over who will succeed Netanyahu as leader of the Israeli right.

Speaking after Netanyahu, Bennett expressed his admiration for the prime minister and made a point of showing empathy for him. He complimented Netanyahu for his sense of responsibility and dedication in his management of the state and its security. Bennett added that he had no doubt that the prime minister would never do anything to harm the country’s safety and security. He told the audience how he had joined with Netanyahu after the Second Lebanon War in 2006, when Netanyahu was still chairman of the opposition, “in order to help the nationalist camp return to the country’s leadership.” That was why he left the high-tech world, Bennett explained.

After so many compliments, however, the speech took a turn, with Bennett taking small but painful little jabs at Netanyahu. He said, for example, “The prime minister isn’t expected to be perfect or to live an ascetic life, but he should be someone who causes people to say, ‘That’s the way to act.’” The speech grew increasingly critical of Netanyahu by the minute. At its climax, Bennett declared, “Receiving gifts so extensively for so long does not meet the expectations of the citizenry of the State of Israel.” He concluded by extending his support for the very police whom Netanyahu attacks so avidly, expressing the hope that Netanyahu is cleared and announcing that he would remain in the coalition until the attorney general makes his final decision on whether to indict.

Anyone familiar with the complex relationship between Netanyahu and Bennett knows how scornful Netanyahu is of Bennett and how much resentment the prime minister and his wife, Sara, harbor toward him. Netanyahu certainly must have realized what Bennett was up to, but for now he has bigger battles to fight.

With all the excitement generated by someone in the coalition daring to criticize Netanyahu, no one bothered to ask why it was so important for the HaBayit HaYehudi leader to throw a monkey wrench into the coalition’s celebration of unity when times are at their toughest for the prime minister. Why did Bennett do it when he was under no pressure from his electorate?

One might expect what Bennett did from Kulanu leader and Finance Minister Moshe Kahlon. The polls show that a significant part of Kahlon's electorate opposes Netanyahu and that the rule of law and officials acting in a respectable manner are both important to them. In other words, he seemed the more likely candidate to read such a subversive text. So why Bennett? His speech didn’t even have a punch line. After all, he is staying in the government, preserving the right-wing coalition and giving Netanyahu some breathing room. The political establishment also has a hard time believing that if Attorney General Avichai Mandelblit decides to indict the prime minister, it will be Bennett who brings the government down, possibly contributing to the right’s loss of power.

What Bennett’s speech reveals is that he is preparing for “the day after” the Netanyahu era and the political Big Bang that will set off the fight over who will succeed him as leader of the Likud and by extension of the entire right. Bennett rejects the idea that the leader of the Likud is automatically the leader of the right and instead sees himself as Netanyahu’s heir. He believes that when facing off against somewhat dry or unattractive political figures like Transportation Minister Yisrael Katz and former Minister Gideon Saar, he will prove to be much more adept at winning over large swatches of the electorate. Bennett also sees that Yisrael Beitenu leader and Defense Minister Avigdor Liberman is not taking off in the polls and that Kahlon has not announced that he will be running for the premiership “after the Netanyahu era” or at least has not done so publicly. In other words, Bennett sees a window of opportunity opening before him.

In some ways, Bennett views himself as a carbon copy of a young Netanyahu. He served in the Israel Defense Force’s most elite unit, became a successful businessman, is charismatic and has a real media presence. His problem, however, is the political platform of the party he leads. HaBayit HaYehudi is the party of the settlers. It is a religious party that has gotten more extreme over time and supports the annexation of the territories. It is not clear whether Bennett wants this to be his launching pad in a run for the prime minister’s office. It is thought that he is relying on a consolidation of parties on the right, an opening of the ranks, and rebranding his own party by culling its most extreme messianic figures.

Meanwhile, Bennett’s decision as education minister to award the Israel Prize to author David Grossman was a lot like his speech. Here too, he honed his strategic approach as an official figure by appealing to the general public. Grossman, who lost his son in the Second Lebanon War, has been one of the harshest critics of the Israeli occupation for more than three decades. He is also one of Netanyahu’s sharpest critics. In 2017,  he won the literary world’s prestigious Man Booker International Prize, second in importance only to the Nobel Prize in Literature. He was the first Israeli to be awarded the honor. At the time, it took Netanyahu almost a day to congratulate him in a very curt and carefully worded statement. In contrast, Bennett “rose above” the gaping ideological differences between him and Grossman. In an interview with Haaretz, Bennett said of Grossman, “[He is] a wonderful author and an Israeli who loves his people and his country. He doesn’t need to prove his patriotism to anyone.”

Bennett frequently appears before diverse audiences, including secular Israelis involved in education and the business sector. He almost always leaves them with a good impression. He comes off as informal, current and brimming with Zionism and a desire to implement change. The responses from his audience have led him to believe that he can become a breakout star with the larger public.

Unlike Likud ministers, Bennett does not draw his strength from Netanyahu, and he is not afraid of hurting him. That is why he dares to come out against him in such a calculated way. By presenting himself as being more ethical than the prime minister, he is preparing the groundwork for the fight to lead the right, while Likud ministers won’t utter so much as a peep, lest they be accused of orchestrating a putsch.