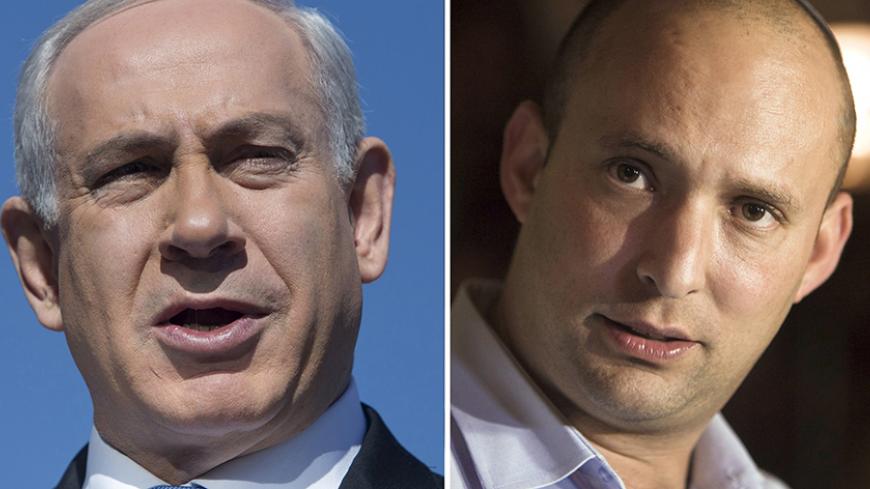 Just before the Cabinet met on Oct. 5, immediately after the Sukkot holiday, the chairman of HaBayit HaYehudi, Minister of Education Naftali Bennett, paid a visit to the recent hotspots in Jerusalem to talk to police serving there.

As he prepared to disavow Prime Minister Benjamin Netanyahu’s “containment policy,” Bennett wanted to be ready for the inevitable conflict. Though he didn’t confront Netanyahu directly, his comments were enough to make the prime minister scowl uncomfortably and look at him scornfully. “I just came back from the field. I questioned soldiers and policemen,” said Bennett, “and they told me that they are not responding to provocations. I visited the Old City, and the police officers stationed there told me that there was no deterrence and that no one was afraid of them. Enough restraint on our part! Enough being so worried! We must act with force and determination.”

Even when he was in New York for the UN General Assembly, Netanyahu realized that his minister of education was preparing to outflank him from the right in response to a wave of bloody terrorist attacks. Using a series of media interviews, Bennett and Justice Minister Ayelet Shaked, also from the HaBayit HaYehudi party, laid out a series of demands, including the rearrest of prisoners released in the 2011 Gilad Shalit prisoner exchange deal and a resumption of settlement construction in the West Bank. But Netanyahu came ready for the political fight. In a chiding tone, he cautioned Bennett, and said, “What happened in Operation Protective Edge will not be happening again. Do you hear me?” Netanyahu was referring to the criticism expressed by Bennett at the time for avoiding a ground attack on Gaza. What the prime minister was trying to do was to show that Bennett was irresponsible and inexperienced, or in other words, the polar opposite of him. And he implied a political threat, too. If you keep it up, he insinuated, you won’t be in this government for much longer. Netanyahu was referring to the possibility of him forming a unity government with Isaac Herzog and the Zionist Camp, an alternative much preferred by the two other coalition partners, Ministers Aryeh Deri of the Shas Party and Moshe Kahlon of the Kulanu Party.

The Cabinet meeting was especially tense. If anything, it highlighted yet again how much Netanyahu loathes the head of HaBayit HaYehudi and also the ongoing mutual deterrence balance between the two men, continuously competing over the right-wing electorate. Most of all, it underscored Bennett’s plan to succeed Netanyahu as the leader of the right.

It has only been a few months since Bennett suffered a crushing blow in the March 17 elections, walking away with just eight seats. Yet, as much as he lost seat after seat to Netanyahu and the Likud, he is already back to fulfilling his master plan of taking over the leadership of the right. While he didn’t plan to get into a conflict with Netanyahu over the diplomatic and security situation so early in the game, the new wave of terrorism, already known as the “third intifada,” made it impossible for him to embrace Netanyahu’s policies. It goes beyond the pressures that Bennett faces from his hard-core right electorate, with its demands for taking a “stern hand” and “determined actions” to combat terrorism. It is also the strategic realization that there is no way of knowing when the next elections will be, so he must be ready to fight for the votes of the right. After the last election, Bennett came under harsh criticism over his “one-man rule” of the party. He therefore realizes that he must be more attentive to the sentiments of the settler bloc, which plays a dominant role in the HaBayit HaYehudi party. He must prove to them that he remains vigilant.

Back when he was skyrocketing in the polls, at the start of the last election campaign, Bennett presented himself as an alternative to Netanyahu as leader of the right. And he still believes that the outcome of that battle has yet to be settled. Netanyahu may have outplayed him politically, but in the end, the prime minister found himself dependent on Bennett and Shaked and had no choice but to give them senior positions in his new government. Bennett believes that he can use this position to grow. “Ostensibly, Bennett has all the qualifications to take over from Netanyahu as leader of the right,” said a senior Likud official who has known Bennett ever since he served as Netanyahu’s chief of staff. Speaking on condition of anonymity, he told Al-Monitor, “He’s young, he knows how to use traditional media and new media to his advantage, and he is very ambitious.” That same source is convinced that, “Bennett is the most relevant figure on the right to succeed Netanyahu, because there is no one in the Likud competing for the post right now. The biggest problem he has is that he is the head of a far right party, and that is not a stepping stone to the prime minister’s office.”

Bennett is aware of this problem, too. When he first entered the political arena, he tried to compete for a place in the Likud, but Netanyahu and his circle blocked these efforts and Bennett was “forced” to take over HaBayit HaYehudi instead. That is why it is not completely clear yet for Bennett how he should plan to fulfill his dream.

Meanwhile, on Oct. 6, while the prime minister and the defense minister visited the Samaria Territorial Brigade, Bennett visited the Old City of Jerusalem, together with the other members of his party. They inevitably visited HaGai Street, where two worshippers were stabbed to death Oct 3. Bennett refrained from escalating his political feud with Netanyahu, preferring instead to talk about a “change of direction.” He promised to restore security to the Old City. Meanwhile, Netanyahu arrived at the Samaria Territorial Brigade headquarters by helicopter, accompanied by Defense Minister Moshe Ya’alon and Chief of Staff Gadi Eizenkott. His remarks during that visit seemed to be directed specifically at Bennett, not just to the public at large, stressing that leaders are expected to show responsibility, rather than hurling verbal assaults. Netanyahu wanted to prove to the right that he was, indeed, taking real steps to combat the current wave of terrorism, despite Bennett’s criticism, and as proof of that, he offered the expanded operations and greater freedom of action that he approved for the security forces. But there was also another message that ran throughout the whole, well-publicized visit, and especially in the photos he took surrounded by the country’s defense leadership. What Netanyahu seemed to be saying with this was that, unlike Bennett and other ministers, he is the responsible adult in the room. And of course, he is “Mr. Security,” too.

While it seems as if Netanyahu still holds all the cards, his Bennett problem is still fairly complicated. Instinctively, Netanyahu would be thrilled to get rid of him and send him scurrying to the opposition. On the other hand, the very thought that this could help Bennett build himself up into a leadership alternative on the right prevents Netanyahu from acting from his gut. This encapsulates the balance of intimidation between the two men. Netanyahu is flaunting the option of forming a unity government as a threat, while Bennett is signaling that he has no plans to abandon his commitment to the right just to sit in the government. In other words, if he is tossed out, he plans to become one of Netanyahu’s most vociferous opponents. In the meantime, however, a formal separation is not an option. Bennett needs more time and experience, and he refuses to assume the responsibility of being behind the collapse of this right-wing government. Netanyahu, for his part, refuses to take a risk by ridding himself of the right-wing HaBayit HaYehudi so soon after he cobbled together his government, especially now, when he is faced with this new wave of terrorism. As long as he can contain the security threat posed by this wave of terrorism and the political threat posed by Bennett, the loaded gun lying on the table will have to wait for the next act in the fight over who will lead the right.