What Trump needs to know about Iranians

US President Donald Trump must take note of the erosion in goodwill toward the United States among Iranians before it is too late. 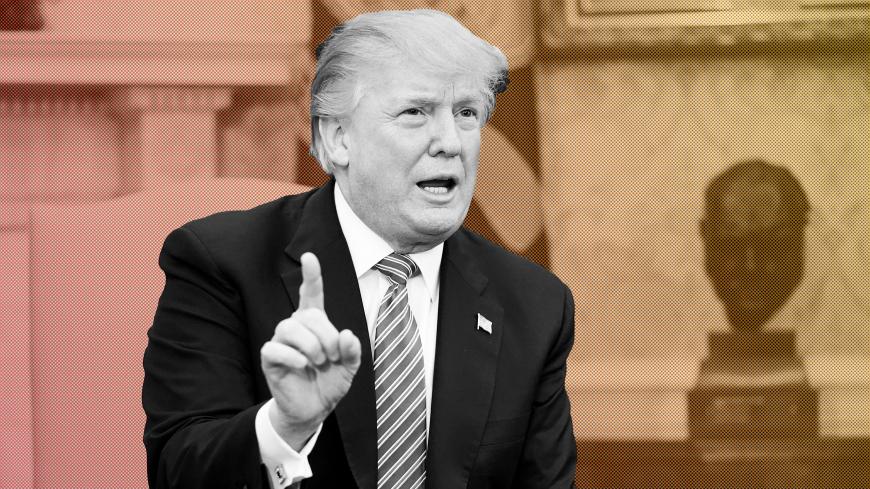 US President Donald Trump declares his opposition to domestic violence during a working session regarding the Opportunity Zones provided by tax reform in the Oval Office, Washington, Feb. 14, 2018. - REUTERS/Joshua Roberts

Ever since the 1979 Islamic Revolution, the implicit goal of US strategy toward Tehran has with rare exception been to subvert the Iranian political system. Under President Donald Trump, regime change has been adopted as official policy. Trump’s approach has been twofold: to increase sanctions and other pressures to weaken Iran while countering its defensive capabilities and regional influence, and to support Iranians who seek to overthrow the Islamic Republic.

Before the Islamic Revolution, Washington was the dominant foreign power in Iran, exercising decisive political, economic, military and cultural influence. The United States came into this position after orchestrating the 1953 coup ousting democratically elected Prime Minister Mohammad Mossadegh and returning to power the dictatorial regime of the shah. The 1979 revolution marked the end of US influence in Iran and was a major setback for Washington in the region as a strategic ally suddenly turned into an enemy.

The most important reason for America’s imbroglio in Iran was the misperceptions US officials had of Iranian society. In a 1977 trip to Tehran, President Jimmy Carter praised the shah for making Iran “an island of stability” and for “the admiration and love which your people give you.” Just months later, slogans of “Death to the Shah” and “Death to America” reverberated in protests that ultimately ended millennia of monarchy in Iran.

While Trump has encouraged the Iranian people to revolt against their government, Secretary of State Rex Tillerson has said that the administration’s aim is to bring about “peaceful transition,” and Sen. Tom Cotton, an influential Trump adviser, has called for covert action to “support internal domestic dissent.” In the lead-up to the revolution, Washington misread the domestic situation in Iran to dramatic consequence. It is of no surprise then that after 40 years of no American presence in Iran whatsoever, the misunderstandings that Trump administration officials have of Iranian society are greater and herald potentially graver consequences. As such, a better US understanding of Iran is of utmost necessity.

The Iranian people are proud of their long history and view themselves as one of the few great civilizations. During his September 2017 address to the UN General Assembly, Trump underscored these “proud roots as a center of civilization.” Yet a month later, he described Iranians as a “terrorist nation.”

Looking ahead, Trump must clarify whether he is speaking with a civilized or a terrorist nation — and if he wants to use the language of respect or humiliation toward Iranians.

The US administration must also gain a more nuanced and accurate understanding of the Iranian people’s demands. In late December, many Iranian cities became sites of protests, at the root of which were economic grievances. In some cases, these protests became violent. Trump lauded the demonstrations from the get-go and proclaimed that the Iranian people were “finally getting wise.”

But there was a disconnect between the reality of the protests and their coverage in US and Western media. While limited in magnitude, the unrest was large in scope. Moreover, after scenes of violence and vandalism promulgated in the Iranian press, counterdemonstrations took place across the country. In particular, during the Feb. 11 demonstrations marking the 39th anniversary of the revolution, thousands turned out. But these events drew practically zero coverage in US media. This skewed coverage of events reinforces misunderstandings of important social and political realities inside Iran and ultimately results in miscalculations and counterproductive policy.

Indeed, a recent poll conducted by the University of Maryland’s Center for International and Security Studies found that while there are widespread and deep-seated economic grievances among Iranians, they by and large oppose regime change. Moreover, directly clashing with Trump’s rhetoric and policies, most of those polled also expressed support for the nuclear deal, Iran’s defense capability — including the country’s ballistic missile program — and regional policies. Remarkably, Quds Force commander Qasem Soleimani enjoys the highest approval rating among Iranian public figures, even as the United States has designated him as a “known terrorist.”

Most of the Iranians who were polled also blamed the Trump administration for not living up to US commitments under the nuclear deal.

In addition, public sentiment in Iran is strongly opposed to Saudi Arabia and Israel. By allying so closely with these countries against Iran, Trump is thus further increasing the antipathy of Iranians toward the United States. The University of Maryland poll also showed that while over 80% of Iranians had a negative view of the US government, a majority for the first time had positive opinions of Russia and China. This dramatic shift in the Iranian public’s perceptions cannot be understated.

In the past 200 years, Iran has been subject to both Russian and British military encroachment and has been forced to cede large parts of its territory. After the establishment of the Islamic Republic, it was invaded by Saddam Hussein’s Iraq, sparking a brutal eight-year war during which the United States and its regional allies supported Baghdad. The conflict cost hundreds of thousands of lives and hundreds of billions of dollars in damage. This is while Iran has not launched a war of aggression in over 250 years. This grander historical backdrop drives Iranians to instinctively unite in the face of foreign interference.

If the United States wants to one day improve its relations with Iran, it must gain the trust of the Iranian people and adopt policies that reflect the realities on the ground in Iran. To this end, the Trump administration ought to take note of the momentous shifts in public attitudes among Iranians. If not, renewed hawkishness may cause a serious backlash with unpredictable consequences.