Controversy in Iran over Rouhani’s call for referendum

Iranian President Hassan Rouhani's call to hold a popular referendum on disputed issues to break the political deadlock in the country has angered conservatives. 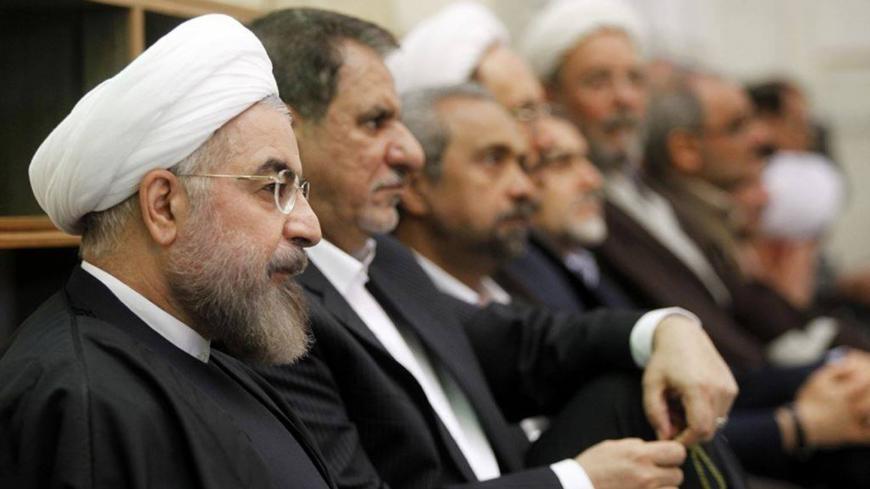 Iranian President Hassan Rouhani's proposal to hold a referendum to resolve the issues and differences between conservatives and Reformists have led many to harshly attack him.

On Feb. 11, the anniversary of the 1979 Islamic Revolution, moderate Rouhani referred to Article 59 of the Iranian Constitution, saying, “If there are disagreements among the parties, [we should] bring in the ballot boxes and we will do whatever people say. Islam, Iran and the Iranian nation are our priorities.”

Rouhani’s proposal has been rejected by conservatives, who see it as a tactic to mislead public opinion. In this vein, Hossein Shariatmadari, editor of the hard-line Kayhan daily, said Feb. 12, “The proposition of a referendum by the president … may indicate his dissatisfaction with the presence of millions of people in the 22nd of Bahman [Feb. 11] marches, which emphasized the foundations of the revolution and the Islamic [political] system — and this was [tantamount to] an extensive referendum with millions saying ‘yes’ to the political system.”

Vahid Yaminpour, a hard-line TV host, also took a swipe at Rouhani, saying Feb. 12, “If a referendum is to be held, based on the findings of a survey by [presidential media adviser Hesamoddin] Ashna on people’s dissatisfaction with their livelihoods, the holding of a referendum on an early presidential election is the [top] priority."

Furthermore, the spokesman for the Guardian Council, Abbas-Ali Kadkhodaiei wrote on Telegram Feb. 13, “The president has proposed [to hold a referendum] that seemingly wasn’t stated after a study [of the constitution], because the function of Article 59 is known to all those who know the basic law.”

He added, “Article 59 is related to the authority of the parliament. Mr. President has perhaps mistaken this [article] with another one.” Of note, the conservative-dominated Guardian Council is tasked with reviewing parliamentary bills to see whether they’re in accordance with the constitution and Sharia.

Despite the hard-liner attacks, conservative analyst Amir Mohebian said Feb. 13, “A referendum is a constitutional article, but I assume that the opponents [of Rouhani] don’t want this [kind of measure] to turn into a normal procedure [for how to resolve political deadlocks].”

It appears that what the conservatives are really worried about is the possibility that Rouhani may attempt to revise the constitution to decrease Supreme Leader Ayatollah Ali Khamenei's power.

Rouhani has responded to the criticisms, referring to the 1979 referendum on whether to establish an Islamic Republic: In that vote, 98% voted in favor of abolishing the monarchy.

“[In 1979], people recognized the right path, which was the path of independence and [not allowing other countries] to meddle with our destiny. If you now ask people whether they want independence or foreigners’ meddling [in the country’s affairs], 98.2% will say that they want independence. This figure doesn’t change. If we ask people whether they want freedom or tyranny, the same percent [of people] will vote for the Islamic Republic [again],” he said on Feb. 13.

Rouhani also emphasized that he, as president, has the responsibility and duty of implementing the constitution.

Amid the conservative sniping, it should be noted that Reformists have largely shied away from publicly endorsing Rouhani’s proposal for a referendum and refrained from wholeheartedly backing him. For instance, Shargh, one of the main Reformist dailies, only covered the issue on its Feb. 13 edition by covering the conservatives’ reactions as well as a brief history of referenda in Iran.