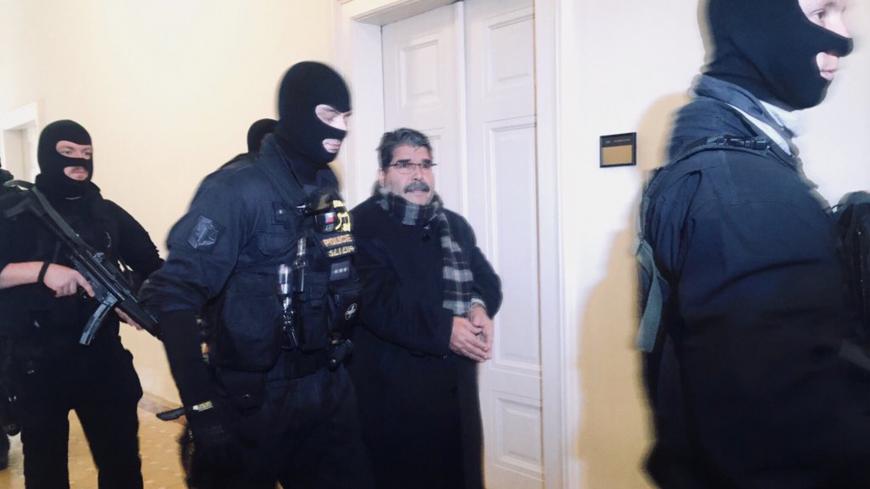 A handcuffed Salih Muslim is led into a courtroom by armed guards in Prague, Czech Republic, in this image tweeted Feb. 27, 2018. - Twitter/@RudawEnglish

In a statement, the Turkish Foreign Ministry asserted that Salih Muslim’s release following a court hearing today displayed “the insincerity” of European countries in the fight against terrorism. Deputy Prime Minister Bekir Bozdag went further, claiming that freeing Muslim was a violation of international law and amounted to support for terrorism. Relations between the two NATO allies would suffer, he added.

According to Foreign Minister Mevlut Cavusoglu, Turkey sent a diplomatic note to the Czech Republic to protest the move and will continue to pursue the former co-chair of Syria's Democratic Union Party (PYD), counted among the most influential Kurdish political groupings in Syria, wherever he went. “For us, Salih Muslim is a terrorist. His release is a scandal.” Turkey has demanded that Muslim, a Syrian national, be extradited to Turkey. There were unconfirmed reports Muslim will have to wait for at least another hearing pending Turkey's submission of evidence against him before he can leave the country.

Turkey insists that both the PYD and its armed wing the People’s Protection Units (YPG), the US-led coalition’s top ally in the fight against the Islamic State (IS) in Syria, are terrorist groups that threaten its national security. On Jan. 20, Turkey launched a large-scale military operation against the YPG-controlled Afrin region and has vowed to eject the YPG from the long slab of territory it controls along the Turkish border. The accusations stem from the PYD and YPG’s allegiance to Abdullah Ocalan, the imprisoned founder of the Kurdistan Workers Party (PKK), which has been fighting on and off for Kurdish self-rule inside Turkey since 1984.

Speaking to reporters following his release, Muslim said he was holding meetings in Europe to explain what was happening in Afrin. "They tried to silence us. They failed," he said.

Muslim was in Prague to speak at an international conference on regional security in the Middle East convened by the University of California's Center for Middle East Development and co-hosted by the Czech Republic, the Netherlands and the United States, The New York Times reported. Muslim was detained at the Marriott Hotel where he was staying a few hours after the conference ended.

In a Feb. 22 interview with Al-Monitor, Muslim acknowledged that he had met Ocalan in Damascus before he was forced out of Syria in 1998 and makes no secret of his admiration for him. But the PYD and the YPG deny they are part of the PKK, saying Ocalan has inspired their thinking and nothing more. Although many PYD and YPG leaders were previously in the PKK, neither is listed as terrorist groups by either the United States and the European Union, paving the way for joint cooperation against IS.

For a while, Turkey was similarly pragmatic in its approach. Until 2015, when peace talks and a 2½-year cease-fire between Turkey and the PKK collapsed, Muslim used to meet with senior Turkish officials to discuss the PYD’s role in the Syrian opposition. He helped plan a joint operation to retrieve the remains of the grandfather of the founder of the Ottoman Empire from a shrine near the town of Kobani and relocate them to a new site near the Turkish border. At the time, around 1,000 YPG fighters wounded in the battle against IS were treated in state-run Turkish hospitals.

Turkey now claims that Muslim was involved in a March 2016 car bomb attack in the heart of Ankara that left at least 37 people dead and over a hundred wounded. The attack, which targeted police personnel, was said to have been carried out by PKK operatives who drove the bomb-laden car and perished in the blast. The Kurdistan Freedom Falcons, which is described in turn as a radical splinter faction of the PKK and its urban terror wing, claimed responsibility for the explosion. Muslim was added to the list of wanted suspects in the prosecution’s indictment a year later. The precise nature of the allegations and evidence against him remain unclear, though the state-run Anadolu news agency reported charges against him include damaging public property and national unity, premeditated murder and transporting dangerous materials. Muslim said he had not traveled to Turkey since February 2015. Observers say Muslim’s indictment is likely part of Turkey’s broader effort to convince the United States and European countries to end their support for the YPG.

Muslim told Al-Monitor that he had offered to mediate between Turkey and the PKK when he still had contact with Turkish officials. "I told them I knew certain people [inside the PKK], we can go to Qandil." He said the offer to negotiate still stands, provided that Turkey halts its attacks on Afrin.