Artists use calligraphy to bring together hostile neighbors in Lebanon's Tripoli

Lebanese graffiti artist duo Ashekman have created a 1-mile-long message of peace on Tripoli's rooftops to unite two estranged neighborhoods in the city. 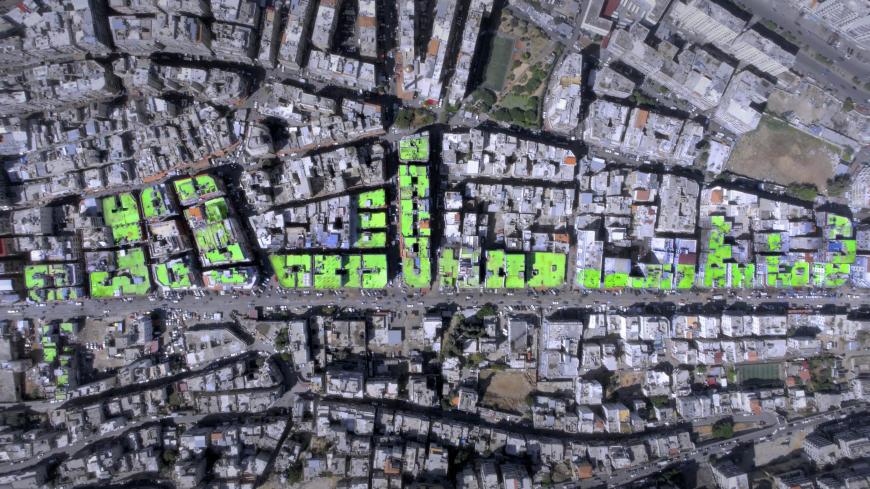 A bird's-eye view of the rooftops of Tripoli, with the Ashekman twins' message of peace. Undated photo. - Ashekman brothers 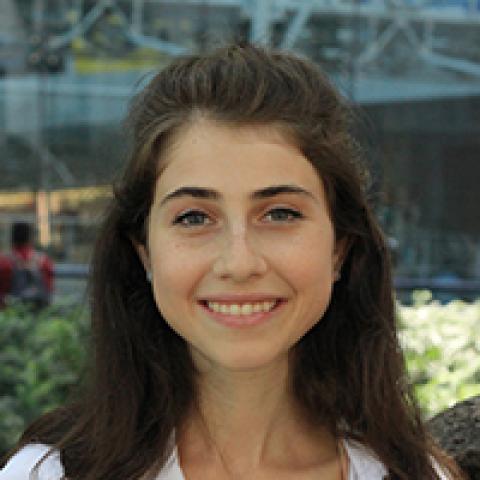 “Why paint on walls when you can convey your message on rooftops in a bigger and better way?” asked Mohamed Kabbani, one half of the Lebanese artistic duo Ashekman, following the completion of their mile-long project, Operation Salam, in the northern Lebanese city of Tripoli.

The work spells “salam" (peace) over 82 rooftops in neon-green Kufic calligraphy. Kufic calligraphy, which originated in Iraq in the seventh century, is one of the oldest forms of Arabic calligraphy. It took Ashekman three weeks to complete the project that is best viewed from the city's rooftops. But this artistic triumph extends beyond its physical breadth: The art piece calls for unification in the historically divided and neglected communities of Jabal Mohsen and Bab el-Tabbaneh in Tripoli.

The idea behind Operation Salam started three years ago, Mohamed told Al-Monitor. “We noticed a lot of fake news in media outlets about Lebanon and the region that didn’t reflect what was actually happening,” he said. “A lot of people in Lebanon want to live in peace and harmony without going to war. They don’t relate to religious extremism at all.”

Identical twins Omar and Mohamed were born in 1983 at the height of the Lebanese civil war. They share an intimate understanding of the country’s instability, which makes their message of peace both symbolic and personal. For the last 17 years, they have used a fusion of hip-hop and Arabic calligraphy to reclaim the streets from the political polarization inscribed on the walls. Their work not only reclaims the streets but the skies, which the government once controlled through its jets and gunshots.

The Kabbani brothers want to change the negative perception of Lebanon as a war-torn country that is also a hotbed for religious extremism. They use artwork to show that the people of Beirut and Tripoli want peace and stability for their families and their country. “Once you have peace and stability then everything else will follow. You can then start thinking about things like technology or going to Mars,” Mohamed said.

But since the 1980s, Tripoli, the country’s second-largest city, has witnessed armed violence between the marginalized neighborhoods of Jabal Mohsen, home to an Alawite majority, and Bab el-Tabbaneh, which is Sunni dominated. The two adjacent communities have historically fought over political affiliations in their opposition or support of the Syrian government.

In the aftermath of the civil war, the Lebanese government neglected Tripoli. With few opportunities for schooling and health care, estranged members of these abandoned communities are particularly wary of outside influence, even from within their own country.

The war in neighboring Syria has caused tensions to spill over into Lebanon. Since 2011, over 200 people have been killed in clashes, according to the International Committee of the Red Cross.

Prime Minister Saad Hariri’s forced resignation in November 2017 spooked Tripoli’s residents, with local businesses bearing the brunt of an impending war. The Saudi-backed resignation was the kingdom’s attempt to stifle any relationship between Lebanon’s President Michel Aoun and Hezbollah.

Scouting buildings on Google Maps, Ashekman headed to Syria Street ­— the demarcation line separating the two communities — to set the project in motion. While the authorities normally allow access to graffiti artists to paint on public facades, Omar and Mohamed joined forces with the Lebanese nongovernmental organization March, which works with the youth in the area, in order to gain permission from the community for Operation Salam.

“It was very important to have community approval and ownership in such a project,” said March founder Lea Baroudi, who helped recruit 62 youths ages 17 to 24 from the two neighborhoods.

March was founded in 2011 to create an empowered civil society, and it has been working in Tripoli since 2014. Two years ago, they opened Qahwetna in Syria Street, a cultural cafe that encourages creative collaboration — music, painting and theater — to encourage tolerance within the community. So far, March has included the youth in several rebuilding efforts to fix the bullet-riddled shops and buildings in Syria Street. Operation Salam was a great way to add an artistic touch, Baroudi told Al-Monitor.

Ashekman approached over 90 buildings with a group of community representatives from March to seek approval for the artwork. These are typically more mature young adults, familiar with the two neighborhoods and its inhabitants. “Involving the youth who live, work and had participated in the clashes and destruction of these buildings was instrumental in fostering unity,” Baroudi said. Some of the participating community members are unemployed, some have artistic ambitions and others have experience with construction painting and are eager to explore their artistic talents.

After clearing out the garbage that had accumulated on rooftops since Lebanon’s waste management system collapsed in 2015, they were ready to paint. Ashekman explained that the buildings they chose had to be suitable for the Iraqi font style they used. Arabic Kufic calligraphy uses geometrical shapes, so they created a freestyle square font based on the urban design of Tripoli.

Samir Hussein, one of the men who helped with the installation, told Middle East Eye, “Although it was hard work to clear the rooftops of trash and debris, little by little, projects like this will bring peace.”

The paint Ashekman used also serves a functional purpose, as it is ultraviolet resistant and has the ability to prevent leaks. The green color is also significant in that it is unrelated to any political party color in Lebanon. They monitored their painting progress by flying drones to capture pictures.

“One of Ashekman’s other objectives with Operation Salam was to shed light on this area and show that the people there also want to live [their lives in peace],” Mohamed said.

"This message of peace is very symbolic for an area that has been synonymous with violence and conflict; it is a message that says 'Look at us and invest in us.' Not in terms of money, but invest in the people who can build positive things,” Baroudi said.

The beauty of this project, Baroudi noted, is that once you bring the youth together they realize they are much more alike than they think. “They have the same problems, aspirations and fears. The religious differences once used to entice sectarian tensions naturally go away,” she added. “Art — such as graffiti, theater, rap or painting — is one of the most important tools because it allows individual expression without judgment, stereotyping or manipulation.”