The northern Lebanese city of Tripoli, known for its violent neighborhood clashes and terrorist attacks, is home to several civil and cultural initiatives that work with youth to eliminate radical thought. 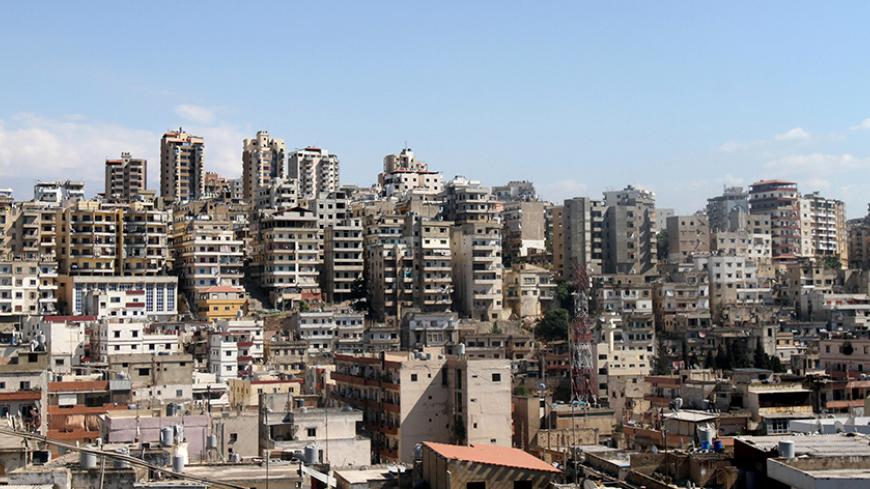 A general view of Tripoli shows the Sunni Muslim neighborhood Bab al-Tabbaneh in the foreground and Alawite neighborhood Jabal Mohsen in the background in Tripoli, northern Lebanon, Aug. 23, 2012. - ANWAR AMRO/AFP/GettyImages

In October 2016, the online initiative Ta3a Sob El Fan (Come to Art) began to highlight the creativity of Tripoli's youth by sharing poems, drawings, songs and video clips created by children and teenagers from the northern Lebanese city. It was an occasion to encourage the youth to spread their ideas, as well as to show the rest of Lebanon that Tripoli is not only about war.

Tripoli is often considered a dangerous and conservative city in Lebanon, due to the continuous clashes between rival neighborhoods since the Lebanese civil war and the outbreak of terrorist attacks since the Syrian civil war. “A lot of Lebanese people are afraid to go to Tripoli,” said Isabelle Wakim, the Saint Joseph University student who initiated Ta3a Sob El Fan.

“Tripoli is the second [largest] city of the country and mostly a Sunni region, not far from Syria and under constant threat from groups such as Jabhat al-Nusra and Islamic State [IS] implementing [their ideologies]. People there feel left out by the state. There are very poor neighborhoods whose youth can be tempted to join radical organizations and fight,” Wakim told Al-Monitor.

Wakim and 10 other students from Saint Joseph University participated in the international Peer to Peer: Challenging Extremism competition sponsored by Facebook and the US State Department. The goal of the competition was to encourage students from all over the world to create a social media campaign to fight extremism in their society. The competition, launched in early 2015, awarded all of the students in the six top teams scholarships between $1,000 and $5,000.

The Lebanese students decided to focus on Tripoli, where they gathered teens aged 13-15 years old and created artwork with them to be shared on Facebook.

“We wanted to show what they do to the rest of Lebanon and also show them they are not alone in a tense situation,” Wakim said. “In their drawings, we saw innocent and also violent things. They really need to express themselves. When we talked about nationality, the children didn't know what it was. But after explaining, they started immediately to draw the Lebanese flag. Another time, we asked them to draw what they wanted, and a kid asked: ‘What am I allowed to talk about?’ So we see expression is very basic and essential for them.”

Although the competition ended Dec. 7, the Lebanese team decided to continue their project and expand it to other Lebanese cities.

A similar idea drove the nongovernmental organization MARCH to open in March 2016 a cultural cafe located between the rival Tripoli neighborhoods of Jabal Mohsen, which is home to an Alawite majority, and Bab al-Tabbaneh, which is Sunni dominated. Festivals, cultural events and job-training workshops continue to take place at the cafe. “We try to give the youth a voice. They are angry, but there are other alternatives than fighting with extremist groups,” said Lea Baroudi, a co-founder of MARCH.

“They just want to vent their frustration, and culture allows it," Baroudi told Al-Monitor. "Even with our renovation project of the streets damaged by the clashes around the cafe, the youth feel they have a voice, they are able to make a positive change in their community and also earn an income.”

Through its activities, MARCH helps young people find ways to earn money and sometimes obtain a steady job. “Art and culture are very important to push youth away from violence, but it is not enough,” Baroudi said. “We also have to make them able to sustain their life and be active. I noticed something while working with Tripoli's youth: They often turn to violence and radicalization due to marginalization, poverty, lack of hope and identity, and a sense of injustice — and radical groups give them that. Imagine that we have men here who used to fight in Syria. The important thing is to offer an alternative.”

Ali Ahmad Amoun, 23, has been taking part in MARCH's Tripoli activities since the group's founding three years ago. He took part in a theater workshop that brought together young people from Jabal Mohsen and Bab al-Tabbaneh. Amoun said that he used to fight against residents of Bab al-Tabbaneh, but now MARCH has given him a chance to escape the conflict and pursue a career.

Amoun helped open the cafe and now organizes events with MARCH. “I discovered that young people … from Bab al-Tabbaneh are like me: They don't want to kill me," he said. "I also learned how to be an electrician. It gave me a whole new life on a personal level, and I encourage younger people to turn to culture and come to the events.”

The day Al-Monitor visited the cafe, it was full of music and singing. Mohamed Saleh, 18, a singer from Tripoli's Abou Samra neighborhood, was cheered on by his peers as he sang. “Last month, I saw an ad for MARCH's festival. They were looking for artists, so I applied,” Saleh told Al-Monitor. “I wanted to give something to my city. I used to see a lot of people fighting against each other, and I think culture and music offer much better things than war.”

Before these cultural initiatives started flourishing in Tripoli, in 2007 a group of Lebanese started the Facebook group We Love Tripoli, which became a nongovernmental organization in 2009. The idea was to share pictures that documented life in Tripoli. “We found out there were big gaps between the communities in the city, for example, the new part and the old one, which is the old city and where the poorest people live,” said Taha Naji, a co-founder of We Love Tripoli. “We decided to break that gap — that fear that even prevented us from going to these areas. We believe that if we don't change the mindset of people from Tripoli themselves, we can't expect to change it in the rest of the country.”

The founders of We Love Tripoli started their group by organizing picture tours in Tripoli. They gradually expanded their activities to three categories: social, cultural and environmental. The activities — including movie screenings, lectures on the city, recycling events and festivals for kids — are all organized on a regular basis by around 450 young volunteers from Tripoli. “We are about to open a youth community center in the harbor city of Tripoli, al-Mina, to reunite kids from difficult communities in the city,” Naji said.

He noted, “We believe that a real change in the city can only happen if young people are involved, as they will become future leaders in their community. It brings them a sense of responsibility and entrepreneurship, which are essential for a long-term project like this one.”

Naji himself was feeling hopeless before starting the initiative. “We wanted to change everything, but it's not possible. We could only create a base to inspire others to do so, keep kids busy and build their self-esteem,” he said.

After the twin bombing of two Tripoli mosques, al-Taqwa and al-Salam, in August 2013, hundreds of volunteers arrived to help with the cleanup. Islamist groups arrived and threatened to kill the volunteers if they continued with their activities. “That's the biggest impact I think we had in the city,” Naji said. “Our activism, not based on politics or religion, prevents them from recruiting kids. We open their eyes about how they can be useful for the city.”