Truth urged on airstrike that killed Iraqi police officers and injured the mayor in Anbar province. 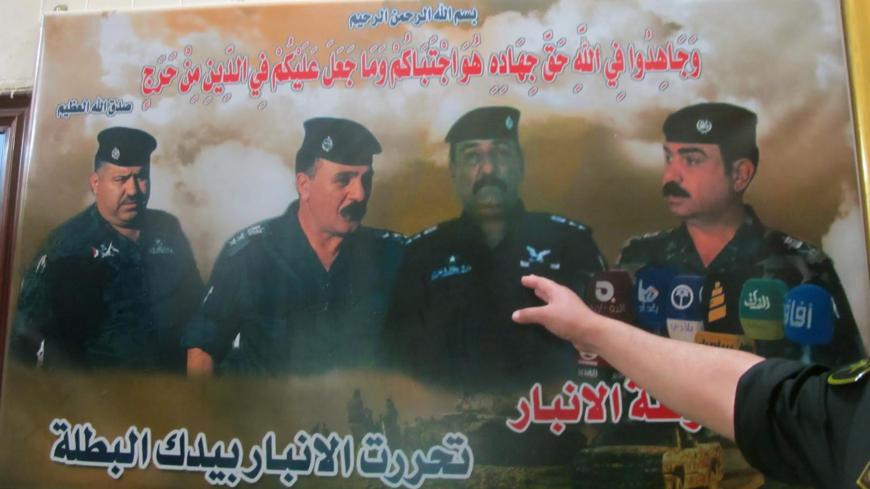 AL-BAGHDADI, Iraq — An airstrike in late January in Iraq’s western Anbar region, nowhere near Islamic State (IS) territory, killed several members of the local security forces, injured the mayor and has left many people demanding answers.

Should they not receive them, underlying tension could impact the balance of loyalty in a town under IS control only for a few weeks in early 2015 and long seen as friendly to the nearby coalition air base.

Al-Baghdadi sits along the snaking Euphrates River, date palms lining its banks, roads curving around collapsed bridges, a wadi running through and the enormous Ain al-Asad air base hosting coalition troops and training down the road.

Men with thick, bushy, black mustaches and large families are ubiquitous here, where the dominant tribe is al-Obeidi. The town’s police chief, who was a member of the tribe and was killed in the Jan. 27 incident, had "about 15 children" and two wives, according to one of his relatives in the town.

"This isn’t a remote desert zone. This is a safe area. There are security forces and civilians. There was no reason for that airstrike," Maj. Monadel Mumtaz Subar, a nephew of the murdered police chief, told Al-Monitor in an interview at the al-Baghdadi police headquarters on Feb. 14.

Anbar regional police chief Maj. Gen. Hadi Rizej Kessar had told Al-Monitor the previous day in an interview in Ramadi that the incident was "the Americans’ fault. There was a man they wanted. The US forces and the Iraqi army went to the area to arrest the person. They did not coordinate with the police. The Americans and the Iraqi army detained this person, but no one in the police had been notified of this mission. They then returned to the Ain al-Asad air base."

"Police Chief Col. Salam [Abdelsalam Abdullah Ahmed Fahad al-Obeidi], the mayor and some of the police intelligence in police vehicles and in uniforms went to inspect the scene when they heard about the incident. At this point, there was an airstrike on them," he said.

"We lost Col. Salam and four others" from within the police force, and 21 other people were injured, the regional police chief noted.

He added that an official investigative commission had been formed, and he is one of the five members. The commission includes a representative of the local Popular Mobilization Units (PMU), a commander who was also killed in the airstrike.

Kessar noted they had been informed afterward that the coalition forces had reason to believe that the individual arrested in the raid was in contact with members of IS. He stressed, however, that this does not excuse the sending of foreign special forces to the area without prior coordination with local security forces.

Kessar said his main aim was to ensure that the victims are cared for. He pointedly asked how much an American would receive in compensation if the government were found to have been responsible for their unwarranted death on US soil.

The Combined Joint Task Force - Operation Inherent Resolve, established by the anti-IS international coalition, responded to an email from Al-Monitor by saying that the incident was still under investigation, and "the operation was directed by the Iraqi security forces’ Anbar Operations Center and led by an Iraqi army unit."

The email stated that "coalition support to the Iraqi security forces, including airstrikes, comes at the request and approval of our Iraqi partners. The coalition has nothing further to add at this time."

Hadi and other police commanders deny there are any problems between them and the Iraqi army, and they stress that they have fought "side by side" with them against IS.

Several members of the security forces operating in the area said on condition of anonymity, however, that the head of the Jazeera and Badiya western half of the Anbar region, Staff Maj. Gen. Qassem al-Mohammadi, had "caused problems" for them.

The general has also refused entry several times to Al-Monitor over the past year, both during military operations and when no operations were ongoing, and other times he made it extremely difficult and time-consuming.

Al-Monitor’s reporter was the only Western journalist to be embedded with Iraqi forces during the Rawa and al-Qaim operations in November. Mohammadi and other officers from the 8th Division of the Iraqi army have repeatedly denied that non-local PMUs are in western Anbar, despite their obvious presence on the ground.

In al-Baghdadi, the acting police chief, Col. Mohamed Awad Allawi, noted that he had been sent from Ramadi about a week prior to Al-Monitor’s interview with him on Feb. 14 and was very new to the area.

"I just met Sheikh Mallalah [al-Obeidi] today," the head of the local PMU, he said, noting that the local PMU was helping to provide security in the area.’’

He said that in total nine people had been killed in the airstrike and some of the injured had been flown to Jordan for treatment.

Subar, the nephew of the murdered police chief, showed Al-Monitor photos of the burned police vehicles and took its reporter to the scene of the incident, noting the distance — "about a kilometer" — between where the man was arrested and where the alleged clashes took place that were followed by the airstrike. He said he was the first to arrive at the scene of the airstrike.

The only reason he could imagine why this happened, he said, was that someone "wanted the chief of police, the head of the local tribal militia [PMU] and the mayor dead."

Subar stressed that "we didn’t expect this of the Americans" and that US forces had been very helpful in the fight against IS.

"We just want to know why, and who was it that called that airstrike. We want names," he said. "We were together, my uncle and I, in many battles against IS. He was injured three times" during the various battles.

Subar added that "this is not a tribal area. Unlike 80% to 90% of Anbar — from Fallujah to Rutba — this is a lawful place," not one in which tribes sometimes act above the law.

"If they had wanted a man arrested, they should have simply told us," he said.

"We just want the truth," he repeated, pleadingly. "Who called that airstrike? Who was the man on the ground?"

As some Iraqi politicians voice anti-US sentiment and others call for continued US support for Iraq as it struggles to rebuild in the post-IS period, and amid jostling for votes ahead of the May 12 elections, clarity on how such an incident was able to occur may prevent more widespread discontent.