Unnamed forces attacked a Turkish military convoy in Idlib today in the wake of Sunday's car bomb that killed 34. 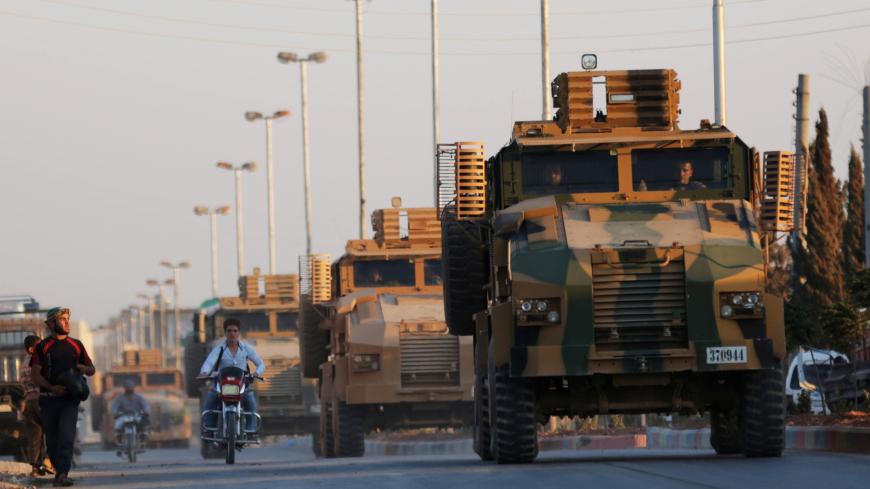 A Turkish military convoy came under fire in Idlib today as Russian-backed regime forces pressed on with their offensive to rout al-Qaeda-linked rebel groups from the eastern half of the northwestern Syrian province. Idlib is one of the few areas to remain under Sunni opposition control since the outbreak of the Syrian conflict in 2011.

According to Turkey’s state-run Anadolu news agency, a rocket landed just 20-30 meters (66-98 feet) from the convoy in the Darat Izza district and no injuries have been reported. Anadolu did not name the attackers and there have been no claims of responsibility so far.

In separate news, the London-based Syrian Observatory for Human Rights (SOHR), which monitors the conflict, reported that the death toll from Sunday’s car bomb attack on the Idlib headquarters of a Chechen jihadi group had risen to 34, of which 18 were civilians.

Turkish troops moved into Idlib in October, ostensibly to establish observation points to monitor a cease-fire between the regime and the opposition and to ease the flow of humanitarian supplies, among other things, for millions of internally displaced Syrian sheltering in the province.

Through its military presence, Turkey was also expected to pressure the al-Qaeda-linked militia known as Hayat Tahrir al-Sham (HTS) to disarm and disband, or at the very least move to the western part of Idlib under the informal terms of the Astana talks Turkey co-sponsors with Russia and Iran.

Turkey has instead eased into a modus vivendi with HTS, and raised many eyebrows when its troops were escorted by the jihadis as they first moved in. Turkey has used its presence mainly to hem in Afrin, the Syrian Kurdish-controlled enclave Ankara has repeatedly threatened to invade.

The looming question is whether Russia will lean on Turkey for having failed to keep its side of the deal to move its troops out of the approximately 2,000 square kilometers (1,200 miles) of territory it controls in the so-called Euphrates Shield zone covering Jarablus, al-Bab, Dabiq and Azaz.

A commander with the Syrian Kurdish-led Syrian Democratic Forces, which are partnering with the US-led coalition against the Islamic State (IS), said in a telephone interview with Al-Monitor, “After Idlib, Jarablus and Azaz will be next.” He insisted, “Turkey and the [opposition] Free Syrian Army gangs have no place in Syria’s future.” And now that Iran is facing internal strife at home its power to influence events in Syria has receded, the commander said. “Therefore the notion that Turkey serves Russia as a counterbalance to Iran in Syria no longer holds.”

Gonul Tol is the executive director of the Turkey program at the Middle East Institute. She concurred in an interview with Al-Monitor that “Turkey can only stay in Syria for as long as the Russians agree. And having failed to do anything to counter HTS, Turkey has outlived its use. Moreover, its activities in Idlib are opaque to say the least.” Tol noted that if Russia is calling for the United States to withdraw its forces from Syria it will need to demand the same of Turkey, if only for the sake of consistency. Unlike Russia, which is in Syria at the invitation of the Syrian government, Turkish and US forces are not.

Either way, the status quo is now being upended as Syrian government forces and allied militias are advancing on eastern Idlib, forcing thousands of civilians to flee toward Turkey. With 3 million Syrian refugees already, Turkey is keen to avoid a further influx and is setting up field hospitals and erecting tents along its border to keep them on the opposite side.

The main target of the current offensive appears to be the rebel-held air base of Abu al-Duhour on the southeastern edge of Idlib and securing the road linking Damascus to Aleppo.

Regime forces have reportedly captured nearly 100 villages from the insurgents in Hama and Idlib since late October. SOHR confirmed that 14 villages were wrested from them today alone and regime forces were now some 11 kilometers (7 miles) away from the rebel-held air base. Turkish authorities have blocked access to the website, ostensibly because of its reporting on Turkey, including a recent report that several senior leaders of IS had managed to find sanctuary there.