Ankara might be awaiting Russian OK for Afrin operation

Although Turkey keeps signaling an imminent operation against Afrin in northern Syria, it appears Moscow hasn’t yet given the green light. 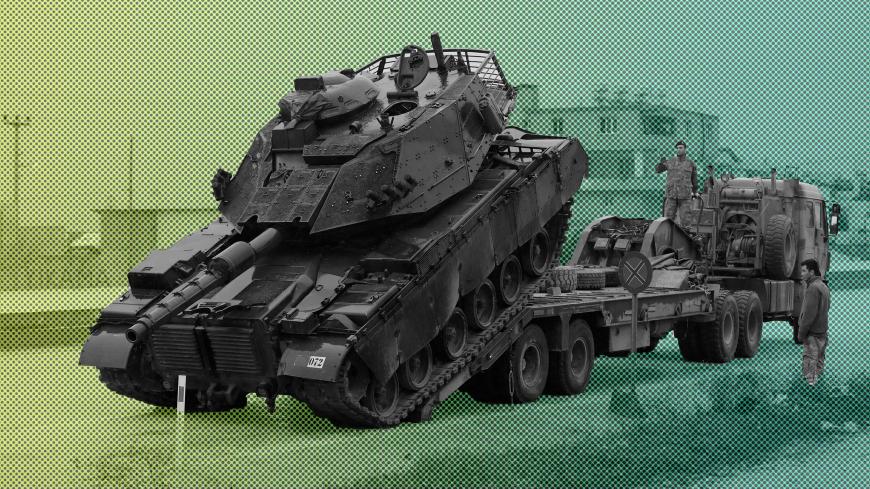 A Turkish military tank arrives at an army base in the border town of Reyhanli near the Turkish-Syrian border in Hatay province, Turkey, Jan. 17, 2018. - REUTERS/Osman Orsal

In daily hard-line statements this week, President Recep Tayyip Erdogan has been reiterating Turkey’s determination to launch a cross-border operation against Syria's Afrin canton, which is controlled by the Kurdish People’s Protection Units (YPG).

His Jan. 13 statement was particularly blunt: “Don’t ever doubt it. One night we may arrive suddenly. If terrorists in Afrin don’t surrender, then we will raze the place on their heads. They will see what we can do before the week is over."

This was the first time Turkey had given a date for his planned operation, and the week is ending soon. Meanwhile, Turkey’s widely reported intensive military preparations north and west of Afrin continue at full pace. Turkish news media is overflowing with banner headlines such as “Turkish Armed Forces ready.” Commando units arrived at the border, following armored and mechanized units.

We are constantly being told of engineering work taking place along the border, including concrete walls, bunkers, reinforced posts and containers. Turkey knows that the YPG forces in Afrin for the past two years were frantically digging tunnels and constructing cement underground facilities to defend themselves from Turkish artillery fire. Against these YPG defenses, Ankara is said to have designed a four-phase operation:

As noted in a communique issued by Turkey's National Security Council after its Jan. 17 meeting, Ankara is fully resolved to launch the Afrin operation.

Ankara has been concerned that it was sidelined from the game east and west of the Euphrates River and even disregarded in the developments in northern Syria. The Turkish army is ready to move along the border, but as of the morning of Jan. 18, when there are only two days left from the Jan. 20 deadline declared by Erdogan, there was still no operation in sight.

The response is actually very simple. Although it is not said in so many words, Ankara is still waiting for a green light from Moscow.

What's Ankara waiting for? The response is actually very simple. Although it is not said in so many words, Ankara is still waiting for a green light from Moscow.

At the conclusion of this article, reports came that Turkish Chief of General Staff Hulusi Akar and Hakan Fidan, head of Turkey's National Intelligence Organization, had unexpectedly gone to Moscow today to meet with Russian Chief of Staff Valery Gerasimov. There were no doubts that Afrin would be their primary agenda item.

Turkish news media is systematically encouraged to bang war drums to boost the public's anti-US sentiment by saying the operation in northern Syria will aim to wreck the US-YPG alliance, and the operation in Afrin will expand toward Manbij. The media were further inspired to bash the United States when, on Jan. 14, a public affairs officer for the Combined Joint Task Force said the United States was helping to form an army that would eventually reach 30,000 fighters, mostly YPG forces, to secure border areas. This statement was later clarified by Ryan Dillon, spokesman for the Combined Joint Task Force, who said Afrin is outside the task force's area of responsibility and the force continues to focus on eliminating the Islamic State (IS) in other areas of Syria.

His statement was quickly followed by one from Pentagon spokesman Maj. Adrian Rankine-Galloway, who said, “There is no train-advise-and-assist program going [on] in Afrin.” The clarifications foiled the desire of the Ankara government and pro-government media to create the perception that “the Afrin operation is against the US.”

Looking at the situation on the ground, it is clear that for an Afrin operation to go smoothly, it would need Russia's approval. If Ankara seeks Moscow's approval, it might get it, because Russia badly needs a military victory for domestic political consumption. In that case, Moscow might give the go-ahead for Turkey to launch a brief operation with limited targets. Moscow might also insist that Turkey hand over Afrin’s governance to Assad after keeping Turkish troops in the area for a short time.

That's fine. But does Ankara dare initiate an operation without Russian consent? It could be done, but at a heavy cost. The biggest risk would be that the clashes would become a long-term, corrosive military struggle in an area with 200,000 residents.

At the end of the day, the bitter truth Turkey faces is this: Yes, Ankara can initiate an operation without Russia, but Moscow may pile up Ankara’s military, economic and, more importantly, political risks by prolonging the operation as long as it wants. The political cost could even harm Erdogan in the 2019 presidential election. This is why I think Ankara is not likely to launch an operation without Russia's blessing.

If Turkey does get Russian approval, three field indicators have to be closely monitored to determine when the operation is likely to start.

The first indicator would be Russia opening up Afrin's airspace to Turkey. The first bitter truth learned during Operation Euphrates Shield was that, to keep up the pace of an operation against a well-dug-in enemy with advanced anti-armor defenses, you need 24/7 close air support. Also, for access to urgent logistical support and to keep troops' morale high, helicopters are indispensable. This indicator is to be trusted more than Turkey’s massing of tank, artillery and armored vehicles along the border. If you see Turkish jets over Afrin, Russia is on board with the operation.

The second indicator would be the withdrawal of some 300 Russian soldiers deployed at Afrin for the deconfliction mission. So far there have been no media reports of Russian soldiers leaving. Turkey's not likely to launch an operation against Afrin as long as Russian soldiers are still there.

The final indicator would be the presence of artillery. To ensure full artillery coverage of Afrin, given its relatively hilly terrain, Turkey would need to base its 155 mm Storm Howitzers south of Afrin. I haven’t yet seen any reports of such a deployment.

Because these three basic indicators are lacking, I don’t anticipate an imminent operation, despite Ankara’s loud expression of determination and all the preparations made with unusual fanfare. Moscow has been noticeably silent and certainly hasn't given the green light.

The next question is, why wouldn't Moscow allow such an operation by Turkey, its critical ally in Syria?

I believe the basic factor that has shaped all the dynamics in the post-IS era is the power struggle between the United States, which dominates the area east of the Euphrates River, and the Russians, who control the western area. This power struggle has three significant goals:

To meet these objectives — so that the United States can expand west of the Euphrates and Russia can head east — both want to use the YPG as their local subcontractors. This contest between the two powers brings to mind the skirmishes and provocations between US and Russian planes recently over the Euphrates.

According to peace negotiations in Astana, Kazakhstan, Turkey was to erect 14 military observation outposts to monitor the de-escalation efforts around Idlib, but only four have been set up. Russian sources who insist on anonymity say Ankara has been too slow in these efforts. Russian Foreign Minister Sergey Lavrov said Jan. 11, ”We are still waiting for Turkey to set up the observation posts as soon as possible.”

In 2017, Moscow had offered Ankara an opportunity to clear the area: Let the radical elements in Idlib leave the city center unharmed or unarmed. But Ankara was late in responding, and its field performance did not meet Russian expectations. It's therefore possible that — dissatisfied with the Turkish performance — Russia gave the green light to the Syrian army to launch attacks north of Idlib.

In other words, Russia believes that Ankara has been stalling in fulfilling its promises to Moscow that it will reshape the Sunni opposition west of the Euphrates to become a coherent actor and separate Sunni armed groups from the radical groups affiliated with Hayat Tahrir al-Sham. An Afrin operation could endanger the sensitive arrangements Russia tried so hard to achieve west of the Euphrates. Of course, the entity most delighted with such a situation would be Washington, which prefers to work alone with the YPG east of the Euphrates and leave the potentially explosive Turkey-YPG crisis in Moscow’s lap.

It's not hard to guess why Washington is quite comfortable staying out of the Afrin issue while Moscow is making sustained efforts to manage the crisis.