In a recent tweet, former Turkish President Abdullah Gul, using guarded language, criticized the Justice and Development Party, setting off a debate about the 2019 presidential elections and a possible face-off with President Recep Tayyip Erdogan. 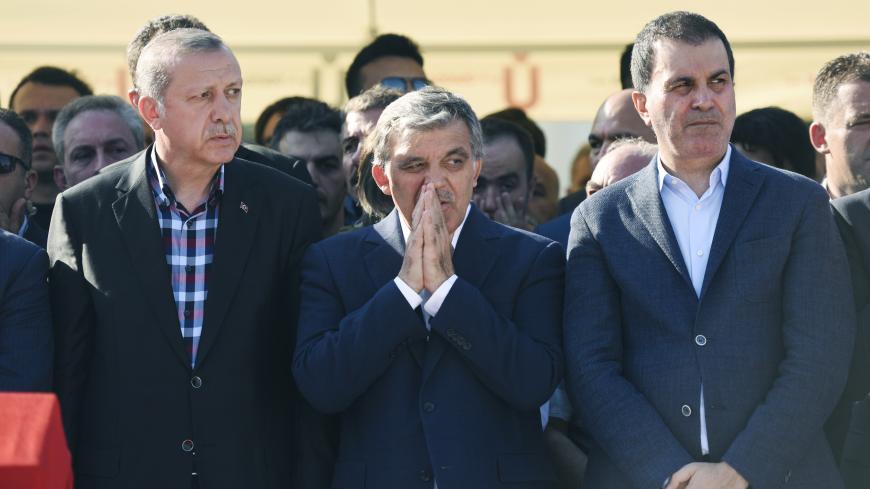 As Iran’s protesters stir global debate about whether the country’s repressive theocracy is finally coming unstuck, in neighboring Turkey, the question looming ever larger is whether Turkey's shaky democracy is about to die.

The blanket repression and hollowing out of the country’s notionally democratic institutions spearheaded by the country’s strongman Recep Tayyip Erdogan since the July 2016 coup attempt amply justify such angst. But the shroud of gloom enveloping the country was pierced, however fleetingly, when former President Abdullah Gul finally spoke up.

The man who has long been touted as Erdogan’s sole credible rival took to Twitter to criticize a pair of new decrees that critics charge effectively legitimize violence carried out by ordinary citizens to defend Erdogan and his government against their perceived enemies.

Using typically guarded language, Gul wrote that while he believed the decrees were issued to protect “our heroic citizens” who poured into the streets to face down the coup plotters on the night of the coup, their wording was “vague” and “troubling” and not in keeping with the spirit of the rule of law.

Thus, to avert future events that might “aggrieve all of us,” he hoped that they would be held up to further scrutiny.

Even this mildest of rebukes ignited hopes that Gul, who as foreign minister was a driving force in Turkey’s once happy relations with the European Union and its waning soft power in the Middle East, was finally girding himself to challenge his former ally and steer the country back from the precipice. Not only had he publicly criticized the president’s policies, he was standing his ground. When Erdogan’s cyber trolls responded with their well-worn tropes about how the British-educated Gul was serving his imperial masters, Turkey’s first democratically elected president declared that as “one who believes in free thought and expression that are among the founding principles of our [ruling Justice and Development Party (AKP)] I shall continue, as warranted to announce my views.”

Gul’s references to “various members of parliament and related trolls” and their “disrespectful” and “immoral” attacks against him had an even more electrifying effect. The gloves were finally off.

And as seasoned expert on Turkey’s Islamist movement Rusen Cakir observed on the independent online news channel MedyaScopeTV, Erdogan and his allies were “terribly perturbed” and that should Gul persist “life for Erdogan would definitely become more difficult.”

And what if he doesn’t? The biggest worry is that if Erdogan wins the presidential elections that are due to be held in November 2019 and formally assumes the sweeping powers vested in the executive branch that were narrowly approved in last year’s referendum, any future elections will become no more than a rubber stamp for one-man rule.

Gul has been widely condemned for failing to speak out forcefully against Erdogan’s rising authoritarianism during his presidential term which ended in 2014. Gul’s timidity bred speculation that Erdogan had compromising information on him. More likely, Gul was fearful of alienating their common base without whose support Gul would have no political future: Public displays of disunity are frowned up in conservative circles. This is why it took so long for the AKP and the Gulenists, who are accused of planning the coup, to carry their war out into the open.

Even now, groused a prominent conservative intellectual, who like many in Turkey these days would only speak on condition that he not be identified by name, “Erdogan invites Gul to a duel and Gul limits himself to firing arrows from afar.” He was referring to Erdogan’s recent thinly veiled salvoes against Gul. “Those who kept silent when Turkey was aflame, the Islamic world was ablaze, when humanity was suffering … have suddenly appeared on the scene and begun commenting on [random] topics. What is going on? … What is the reason for this mischief? When Turkey is waging a new struggle for national liberation what behooves us is to remain united,” Erdogan fulminated at a weekend event.

Some pollsters agree that Gul could win back the presidency, yet as one argued, “The greatest risk remains Gul’s aversion to risk-taking and that he could buckle under further pressure from Erdogan. “He wants the keys [of power] handed over to him without taking the slightest risk.”

Still, the intellectual and the pollster concurred that Gul alone has the potential to reverse Turkey’s unraveling. Gul is the only political figure of any stature who can draw the support of Turkey’s two most important, and to some extent overlapping, demographics: pious right-wing conservatives and the Kurds.

Cakir observed, “It’s a measure of how deep a crisis the opposition is engulfed in as is the government that people like Gul can with a single tweet have such impact.”

A former top Turkish diplomat who spoke to Al-Monitor on strict condition of anonymity said Gul was one of the few Turkish leaders who “can restore Turkey’s global standing as a reliable partner for the West and an inspiration for Muslims aspiring to democracy.”

Under the existing rules should Gul run as an independent, he would need at least 100,000 signatures in order to qualify. “That will be a breeze,” claimed an influential Kurdish politician with close ties to the pro-Kurdish Peoples’ Democratic Party (HDP). The politician, who requested anonymity because of the sensitive nature of the subject, told Al-Monitor that the HDP-led bloc had been weighing for some time whether to support Gul if he ran against Erdogan in the 2019 presidential elections. The emerging consensus, he said, was “that we have to, because he is the only one who can vanquish Erdogan and who can restore some measure of stability and rule of law before it is completely destroyed.”

Though like many Turkish politicians Gul remains a nationalist at heart, he understands that Turkey cannot prosper unless it addresses the Kurds’ grievances in a meaningful way. Gul was the first to reveal the now-defunct Kurdish opening when the government began negotiating with imprisoned Kurdistan Workers Party leader Abdullah Ocalan in 2009.

I and fellow Al-Monitor columnist Cengiz Candar were among a group of journalists on the plane carrying Gul to Tehran in 2009 when he made the announcement, saying, “Very good things will happen with respect to the Kurdish issue in the coming days.”

His sincerity and enthusiasm were palpable.

The Kurdish politician said that even if Meral Aksener, the right-wing nationalist female politician and presidential hopeful, were to take part in an opposition bloc backing Gul as president, the Kurds would hold their noses and join. An alliance with Aksener would help Gul deflect likely attacks from the Erdogan camp that he is cavorting with “terrorists.”

Gul’s next move, argued the conservative intellectual, should be to put out a statement saying that the emergency rule, which is up for an extension on Jan. 15, ought not to be renewed and to explain why.

The wrench in the mix is Kemal Kilicdaroglu, the leader of the main opposition Republican People’s Party (CHP) who is getting ready to declare his intention to run. Although he has not won a single election since he began leading the party in 2010, Kilicdaroglu, according to CHP officials who spoke to Al-Monitor, is seized with the illusion that he can lead an opposition bloc. Kilicdaroglu is reportedly seeking to persuade Aksener and the HDP to back him. In exchange, he is pledging to appoint Aksener and a pro-HDP Kurd as vice presidents. The CHP commands around 25%, so either way, Kilicdaroglu would split the opposition making it somewhat easier perhaps for Erdogan to win the 50% plus one vote he needs to sail to victory in the first round of balloting.

It is thus a safer bet for Aksener and the Kurds to back a winning ticket and be assured a seat at the table — and that ticket "is Gul, not Kilicdaroglu; we have done all the math,” the Kurdish politician reasoned. However, bearing in mind that Erdogan might resort to fraud in a last-ditch attempt to cling to power, an opposition victory would be best assured if Kilicdaroglu were to bow out of the race. Thus, Kilicdaroglu has a historic duty to not run — and Gul to run. For all the euphoria triggered by Gul’s recent pluck, the question of whether either man will rise to the occasion, and more critically of how far Erdogan is prepared to go to eliminate his rivals, remains depressingly open.