As Iraq's parliamentary elections approach, the rise of a new tripartite Kurdish political alliance has highlighted the level of divide among the rest of the Kurdish parties hoping to contest the election. 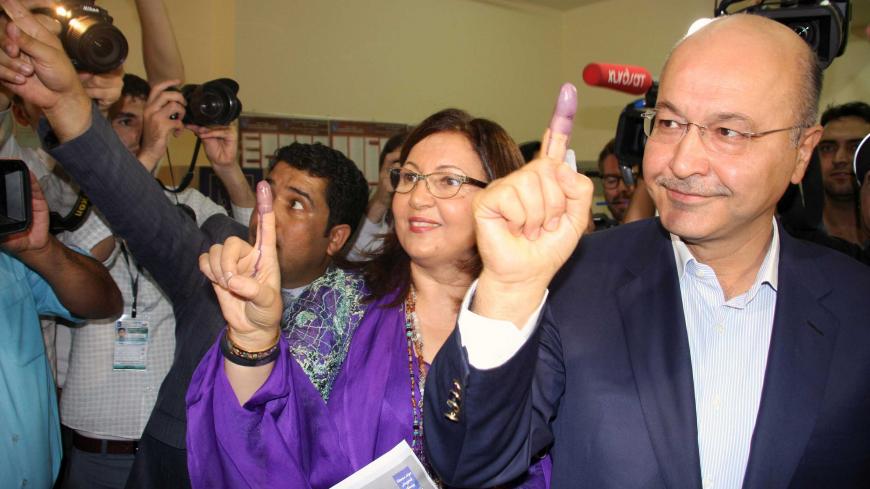 As Iraq heads for parliamentary elections on May 12, the rift between the opposition and other forces governing the Kurdistan Regional Government (KRG) is growing increasingly wider.

In this vein, a tripartite alliance was put in place Jan. 10, between the Movement for Change (Gorran), the Kurdistan Islamic Group and the Coalition for Democracy and Justice, led by Barham Salih. The new tripartite National Alliance was built with the objective of running in the upcoming parliamentary elections in Baghdad, and winning in the disputed areas.

This was followed by the registration of the Kurdistan Peace List, which is an alliance between the KDP, the Patriotic Union of Kurdistan (PUK) — the traditional partners in the government — and the Communist Party of Kurdistan.

Nevertheless, given the confusion surrounding the Kurdish political parties in regard to their participation in the electoral race, Khosro Goran, who is in charge of the KDP’s electoral institution, said that “the alliance is no longer in place, as the party announced its unwillingness to take part in the elections in the disputed areas,” considering said areas to be under the military occupation’s authority, in reference to the Iraqi army’s unilateral return to those areas on Oct. 17, 2017, following the Kurdish referendum for independence Sept. 25.

Kader Qachagh, the head of the KDP’s Ninevah branch, announced Jan. 18 the party’s participation in the eastern part of the Kurdistan Region, such as Mosul, Sinjar and Makhmur. Such a decision has questioned the party’s contradicting stance when it comes to running in the elections in Kirkuk and Mosul.

Surprisingly, the Kurdistan Islamic Union withdrew Jan. 16 from the KRG in protest against the non-implementation of Article 24 of a memorandum it had previously submitted to the KRG. Such a withdrawal would cast a shadow on the fate of the coalition government, particularly following Gorran and the Kurdistan Islamic Group’s departure earlier.

Observers raised speculations on the possibility that the Kurdistan Islamic Union would join the National Alliance, led by Yusuf Mohammed.

Al-Monitor communicated with a KDP official who spoke on condition of anonymity of this alliance. He stated, “We hoped that the Kurdish parties were brought together under one alliance to preserve the Kurd’s dominance in the occupied areas. Yet all political parties, including the KDP, are responsible for the confusion.” He added, “It was better for the Kurdish political parties to be unified at the present time, as our people face hard conditions.”

Commenting on the tripartite National Alliance’s strategy, spokesman for the Coalition for Democracy and Justice Rebwar Karim said Jan. 11, “We seek to form a national alliance and pursue a new Kurdish policy that differs from the style of politics adopted in the past.”

Mohammed Ali, coordinator of Gorran’s political bureau, told Al-Monitor, “Our strategy involves turning the political system into a parliamentary system, turning the armed forces into a national force, the impartiality of the judiciary and restoring ties with Baghdad based on mutual interests.” He pointed out, “We seek to win the citizens’ trust to be able to peacefully lead the next government and carry out our projects.”

Spokesman for Kurdistan Islamic Group Rebwar Hamad told Al-Monitor, “This alliance is an opportunity for the Kurds to have their image restored following the Oct. 16 events and objectionable consequences of the referendum.”

Commenting on the plans of the alliance after the elections, he noted, “We are focusing on the disputed areas and the formation of a coalition covering these areas in order to win the citizens’ votes. This is due to the insecurity and presence of more than 5,000 displaced people. We are also trying to establish a joint administration to resolve all crucial issues, because the governments in Baghdad and Erbil are blamed for the unresolved situation of these areas.”

Commenting on the disputed areas, Rebwar Karim said, “We joined this alliance upon the request of the citizens in these areas who are tired of the erroneous policies pursued there. Thus we hope to gain the people’s votes to be able to pursue new policies, namely restoring justice and involving everyone in building their future.”

He added, “Our efforts focus on two key issues: First is to halt the policy of driving the citizens out and vandalizing their houses in areas subject to Article 140, and second is to handle the fate of said areas in accordance with constitutional Article 140.”

In a meeting bringing together his party’s members in Erbil Jan. 16, Mullah Bakhtiar, administrative official at the PUK political bureau, said the electoral period is witnessing the worst of times in Iraqi-Kurdish relations. We have failed to form a unified Kurdish list [to run in the elections] in the disputed areas and Iraq. Unfortunately, the Kurds are divided while Arabs are concurrent.”

Based on that, the PUK, the second strongest Kurdish party, seems to be running independently in the Kurdistan Region and the disputed areas.

All of these signs indicate that the Kurdish political parties in the Kurdistan Region will independently run in the electoral race, with the exception of the tripartite National Alliance that perceives itself to be the strongest Kurdish coalition.