The return of Iraqi federal rule in Kirkuk has brought about tensions between the Kurds and others amid joint attempts by the Kurds and the Baghdad government to calm the situation in the province. 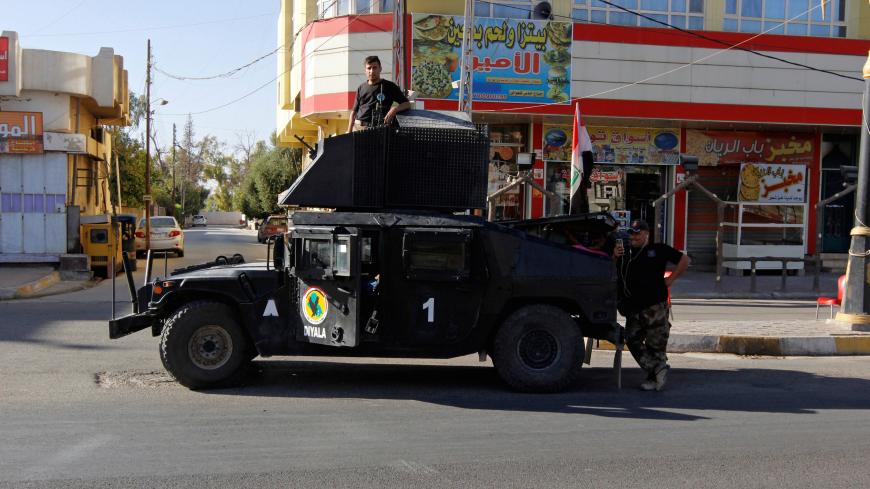 An Iraqi federal police vehicle is seen on a street in Kirkuk, Iraq, Oct. 19, 2017. - REUTERS/Ako Rasheed

KIRKUK, Iraq — In a Jan. 4 meeting with a delegation representing Kurdistan’s opposition parties, Iraqi Prime Minister Haider al-Abadi said that an agreement has been reached to calm the situation in Kirkuk province and in the district of Tuz Khormato.

The retaking of Kirkuk by the Iraqi army in October has changed the balance of power in the oil-rich town that had been under full control of the Kurds since 2014. The operation was part of Baghdad’s retaliatory measures after the Kurds held an independence referendum that has since been declared illegal.

In Kirkuk, some signs of the three years of Kurdish control have already been erased. Some pictures of Kurds who fell in the battle against the Islamic State (IS) have been replaced by images of other Iraqis who were killed, and the 20-meter-tall (65-foot) statue of a Kurdish peshmerga fighter on the motorway into the city now has an Iraqi flag.

In his office in the Kirkuk provincial council’s compound in downtown Kirkuk, with the bodyguards of Turkmen and Arab colleagues hanging around in the corridor, independent Kurdish council member Awad Amin said, “All the balances have changed. Some feel that now is the time to readjust all the wrong decisions made by the Kurds.”

Kirkuk is a mixed city shared by Kurds, Arabs, Turkmens and Christians. Politically, the Kurds were a majority and held the governor’s post, but the deadlock over new elections, power sharing and the status of the disputed city has remained impossible to break. Since the Iraqi takeover, the departures of the governor and a number of Kurdish politicians have changed the political balance of power.

In the 1970s and 1980s, Iraqi dictator Saddam Hussein confiscated hundreds of acres of agricultural land from the Kurds and gave the land to Arabs in order to Arabize the area. Some of the Arabs were expelled from the city while the Kurds controlled it.

The new Iraqi Constitution introduced after Saddam’s removal in 2003 includes clauses related to settling the fate of the city and its residents. But the process has been difficult and slow.

“Only a few of the 6,000 cases have ever been resolved,” Amin said. “Now we see Arabs coming back. The Kurds feel hopeless.”

Most recently, the Iraqi police were involved in threatening Kurds in the village of Palkana in Kirkuk province. They reportedly ordered them to leave their homes within 72 hours, as members of an Arab tribe were waiting to take them over. After urgent complaints, the authorities in Baghdad prevented this from happening.

The Kurds lost their own security forces when the Iraqi army took over Oct. 16.

According to Rawla Hamid al-Obeidi, a member of the Arab Committee on the provincial council, the Kurdish forces cannot return. “They caused many problems here. They were tied to the Kurdish parties and working to further their interests. We are against those kinds of forces.”

Obeidi said that since the situation is now stable and safe, all Kurds are welcome to return. It is just a rumor that those who voted in favor of Kurdish independence are not welcome, she said. Still, the fact that the Kurds imposed both their referendum and the Kurdish flag on the people of Kirkuk is “a big problem for us. The Kurdish flag should only fly in those places where the Kurds rule.”

The Kurds saw the flying of their flag to be within their rights, as they had taken control of the city after chasing IS away. But Obeidi brands it as “imposing their vision on the city. They used their domination to push things through, which is bullying. We are supposed to pass laws by agreement.”

While the Kurds complain about Arabization, the Arabs accuse the Kurds of Kurdification. Now that Kurdish rule has ended, Obeidi is working on taking the peshmerga to court over the destruction of Arab villages in the battle against IS. Human rights organizations have confirmed that dozens of villages in Kirkuk province were razed and flattened and its inhabitants expelled. While the peshmerga branded them IS villages, the operation was seen as a move by the Kurds to take over disputed areas.

Some 82 villages were destroyed, said Obeidi, and over 22,000 people were displaced and made homeless. “The peshmerga trespassed on the rights of the Arab people living there,” she added. Obeidi wants to bring the matter to the international courts so those responsible will be punished, and she mounted a campaign to help the villagers go back home.

Both Arab and Turkmen members of the provincial council say the situation is better than before, but that opinion is not shared outside the council compound. “You do not know whom to trust,” said freelance Turkmen journalist Omar Hilali. “Before, people feared the Kurds. Now anyone can pick you up.”

Hilali was himself picked up and forced by Iraqi security forces to sign a document stating that he had no links to the Kurdish media. “But many of my friends are Kurdish journalists. Now I dare not even pick up the phone when they call me.” The same thing has happened to nongovernmental organization workers, he said.

The first weeks after the takeover saw many revenge attacks. Following the looting and destruction of thousands of Kurdish homes after their owners fled the nearby Turkmen-Kurdish town of Tuz Khormato, a Kurdish resistance group was formed to fight the Shiite militias controlling the area.

Amin agrees that the problems between the groups have been aggravated. “The different groups are moving further and further apart.”

“Normalization can only happen after Erbil and Baghdad have entered into direct negotiations. Our problems can only be solved at the highest level,” Amin said.