Israel prefers to ignore the changes surrounding it, such as threats by Palestinian President Mahmoud Abbas to cancel the Oslo Accord and Iran’s change of stance on the Arab Peace Initiative. 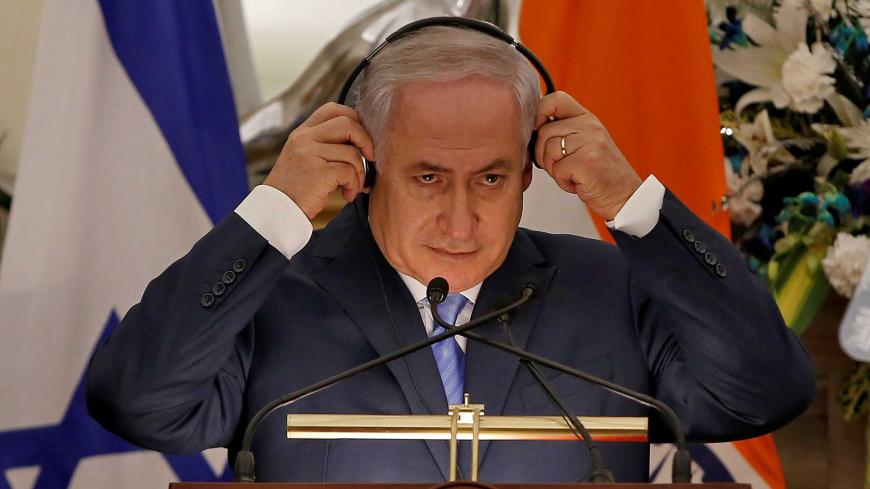 For 50 years, with brief interruptions, Israeli governments have been handling the conflict with the Palestinians according to a familiar, simplistic formula: If the use of force doesn’t work, try using brute force. However, the use of force often results in collateral damage — or as a Russian proverb explains it, when you chop wood, chips fly. Sometimes, as in the deadly Jan. 9 terror attack near the West Bank outpost Havat Gilad, those struck by the chips are Israelis. Usually, as in clashes last month between Israeli troops and Palestinian protesters in several West Bank towns, Palestinians are the victims.

This goes on while Israel is allegedly still part of the imaginary Oslo peace process that began almost 25 years ago and parallels the ongoing growth in the number of Israeli settlers on Palestinian lands in the West Bank. Barring a dramatic shift in the plot in the coming days, all that will be left of the landmark Israeli-Palestinian agreement is a popular Broadway play. Israel will be the biggest loser if the curtain comes down.

If the Oslo Accord (signed by the left-wing Labor Party) did not exist, the Israeli right wing would have had to invent them. While serving as head of the civil administration in the West Bank in 2007-11, Maj. Gen. Yoav Mordechai told me years ago that his biggest nightmare is having the Palestinian prime minister hand him the keys to the Palestinian Authority (PA). The PA, established in the mid-1990s as an integral component of the Oslo Accord, replaced the Israeli military officers who had governed Palestinian affairs since Israel occupied the West Bank in 1967. The Palestinian security forces formed under the agreement have since acted as de facto subcontractors for Israel’s army and Shin Bet security agency, serving vital Israeli interests.

Until the PA was established, Israeli taxpayers were saddled with the bill for the West Bank occupation and Israeli settlements there. Since then, Arab and Western states have been footing a significant portion of the bill, partly through a grouping of donor states established by the Clinton administration to buttress the peace process. Palestinian President Mahmoud Abbas’ Jan. 14 announcement about the death of the diplomatic process also sounded the death knell for that financial arrangement. Abbas said, "Today is the day that the Oslo Accord end. Israel killed them.” The day after, the Palestinian Council decided to promote turning the PA into a state under occupation and called upon the PA to suspend its recognition of Israel and stop security coordination with it.

The Trump administration is not having much luck promoting its much-touted “ultimate deal” between Israel and the Palestinians. Instead, it is moving ahead with the crude approach that only money talks. Put another way, if cutting aid to the Palestinians doesn’t work, cut deeper. In a tweet following the attack near Havat Gilad, US Ambassador to Israel David Friedman complained that the PA was rewarding the families of terrorists who kill Israelis. He signed off his message with the words, “Look no further to why there is no peace.” If the Palestinians don’t want peace, why should the American taxpayer fund support for terrorists? Not a word about the fact that the murdered Israeli had been living in an illegal outpost on occupied land.

According to the principle set out by the ambassador, the United States should also cut off aid to Israel, which pays social welfare benefits to the families of Jews who attack and kill Palestinians. Such was the case with the family of Baruch Goldstein, the settler who killed 29 Muslim worshippers in 1994 in Hebron; the relatives of the Israelis who burned to death the Palestinian Dawabshe family in 2015; and the family of Yigal Amir, who assassinated Prime Minister Yitzhak Rabin in 1995.

Friedman was not expressing his personal views. He is his master’s loyal voice. “We pay the Palestinians HUNDRED OF MILLIONS OF DOLLARS a year and get no appreciation or respect,” President Donald Trump tweeted in response to the furious Palestinian reaction to his Dec. 6 recognition of Jerusalem as the capital of Israel. “With the Palestinians no longer willing to talk peace, why should we make any of these massive future payments to them?” Trump asked. “Talking peace,” as per Trump, means accepting with equanimity the disruption of the status quo on Jerusalem, putting up with continued Israeli construction in the settlements and ignoring repeated statements by leaders of the ruling Likud Party rejecting the establishment of a Palestinian state in the West Bank.

The “why keep paying them” approach is reminiscent of an order issued in 1946 by the British commander in Palestine, Gen. Evelyn Hugh Barker, on the day after the bombing of the King David Hotel in Jerusalem by the Jewish Etzel underground in which 91 people were killed. Barker ordered British forces to boycott shops and entertainment spots owned by Jews. “I am determined that they shall suffer punishment and be made aware of the contempt and loathing with which we regard their conduct. … The aim of these orders is to punish the Jews in a way the race dislikes as much as any, namely by striking at their pockets," the anti-Semitic general wrote.

Trump’s path to the White House was paved with dollars. In his view, what works in an enlightened country such as his cannot but work in others. He ignores the fact that years of harsh financial sanctions accompanied by dictates and threats did not stop the Iranian nuclear program. On the other hand, serious negotiations that led to a respectable agreement and the easing of sanctions strengthened the support of the relatively moderate Iranian camp led by President Hassan Rouhani. Trump is also ignoring Rouhani’s surprising vote in favor of the Arab Peace Initiative at the Organization of Islamic Cooperation summit last month in Istanbul. Trump is gambling with what’s left of his prestige. Netanyahu is gambling with the lives of Israelis.

Israel has managed to contain the dispute with the Palestinians for decades and conduct a more or less normal existence despite the aching loss of hundreds of Israeli lives in terror attacks. However, according to an analysis document referred to as the "most dangerous and realistic scenario,” which was submitted to the government by Defense Minister Avigdor Liberman in 2016, in the next war with Lebanon, Hezbollah will fire 3,000-4,000 missiles at Israel in one day. This is more than the number fired during the 33-day 2006 Second Lebanon War. And this time the missiles will be more accurate, deadlier and with a longer range, covering all of Israel’s sovereign territory. Alex Fishman, the military analyst of Yedioth Ahronoth daily who reported on this scenario on Jan. 16, noted that although over 18 months has gone by since the government was presented with this forecast, not a single defense Cabinet debate has been conducted about the readiness of the country’s heartland for the threat of such massive firepower.

It almost goes without saying that Prime Minister Benjamin Netanyahu evinces no interest in Iran’s surprising shift on the Arab Peace Initiative that offers Israel security and normal ties with the Arab world and could avert the next war. As far as he’s concerned, as long as Trump backs the Jews and punishes the Muslims, life is heaven on earth. That may be true for his family and that of his defense chief, Liberman.