The numerous anti-Palestinian bills pushed forward by Prime Minister Benjamin Netanyahu's coalition are signs that the right is preparing for early elections. 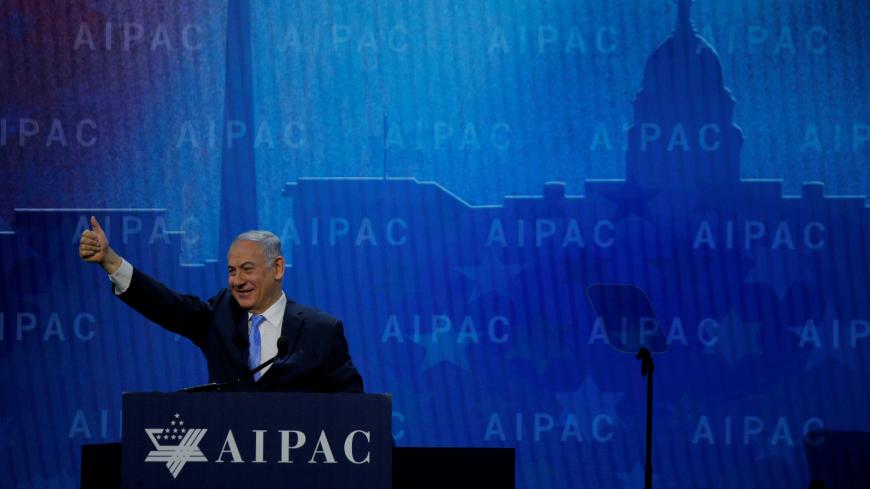 One of the typical symptoms of election fever is a life-threatening outbreak of populist legislation. The epidemic does not distinguish between radical right and center-right, and does not spare politicians hiding behind the label of center-left. Unfortunately for those elected officials, the media is busy these days with public corruption scandals and the governing coalition crisis over the military draft law for ultra-Orthodox Jews. They have sidelined the Israeli-Palestinian conflict and its implications, such as the instability of the Palestinian Authority (PA), Israel’s only potential partner for peace. Nonetheless, Knesset members are energetically promoting a series of proposed bills that could indicate the agenda of the coming election campaign. Prime Minister Benjamin Netanyahu may avoid starring in television and radio campaign advertising spots in light of his many ongoing criminal investigations, but his hallmark slogan and the title of the book he published in 1995 — “Fighting Terrorism” — will continue to take center stage.

On March 5, the Knesset gave overwhelming initial approval to proposed legislation allowing Israel to deduct money from various taxes it collects for the PA to punish it for “supporting terrorism.” Fifty-two lawmakers voted for the bill, which openly violates a 1994 interim agreement between Israel and the Palestinians. Only 10 refused to greenlight this distortion of the Paris Protocol, the interim agreement regulating economic ties between Israel and the PA under which Israel commits to collect taxes for the Palestinians, such as customs import duties and income tax deducted from the pay of Palestinians working in Israel, and transfer these revenues to the PA.

Knesset member Dov Khenin of the Joint List said during the Knesset debate on the bill that Israel was not doing the Palestinians “any favors” by handing over the money and was not doing so out of the “goodness of its heart.” His fellow party member Aida Touma-Sliman suggested changing the language of the bill to replace the word “deduct” with “steal.” However, in addition to eight of her party members, only two Knesset members of the left-wing Meretz opposed the proposed law. Twelve Zionist Camp Knesset members and eight members of Yesh Atid, both opposition parties, voted in favor of the bill.

As far as anyone knows, no Knesset member has ever suggested a bill that would deduct funding for rabbinical colleges or the West Bank outposts that have served as home to Jewish terrorists, mosque arsonists, students who beat up soldiers and rabbis who incite against Palestinians. Israeli taxpayers continue to funnel massive budgets to religious institutions that advocate xenophobia. State-supported local councils collaborate with Jews stealing Palestinian lands. No one even considered withholding social welfare benefits from the widow and orphans of mass murderer Baruch Goldstein, who killed 29 worshippers in a Hebron mosque in 1994, nor from the families of other Jewish terrorists.

Supporters of the bill, which faces two additional Knesset votes before it becomes law, complain that the PA and its leadership “glorify” terrorists who attack Israelis, while Israel has named innumerable streets and town squares after the pre-state Etzel and Lehi underground organizations responsible for the killing of dozens of Arab bus passengers and passersby as well as British and Jewish soldiers suspected of collaborating with the enemy. The bill, however, is not simply an expression of contempt for a signed pact with the Palestinians for the sake of picking up a few votes. It is being promoted at the expense of endangering the voters. Subjecting the PA budget to cuts means withholding pay from its employees, among them members of the security forces. The greatest beneficiaries of such moves are Hamas and Islamic Jihad, the two Islamist Palestinian groups funded directly by Iran and Qatar. Israeli defense officials consistently praise the coordination with the Palestinian security agencies that has saved the lives of many Israelis.

On March 6, the Knesset Internal Affairs Committee voted for a bill initiated by Bezalel Smotrich of HaBayit HaYehudi, authorizing district police commanders to prevent the handover of Palestinian terrorists’ bodies to their families if an officer entertains “reasonable suspicion” that the funeral procession would endanger lives by “inciting to terrorism or identifying with a terrorist organization or activity.” In explanatory remarks, the bill’s author noted that in some cases, funeral procession participants have raised banners and made speeches expressing support for the attack in which the terrorist had died or calling for additional attacks.

The lawmakers have obviously never seen the funerals of Jewish settlers killed in West Bank terror attacks. They have never heard participants’ calls for revenge and incitement to carry out tit-for-tat attacks against Arabs. Committee members were unmoved by the reservations of the state prosecutor’s representative, attorney Gavriela Pissman, who said the law was unnecessary given that both the penal code and anti-terrorism laws address suspicions that a funeral procession could turn into an incitement parade. She noted that the prosecution had been unable to establish a link between incitement and terrorism, adding that she would be “glad” to get research supporting such claims. However, with the threat of another Knesset member hijacking the legislative initiative and raking in public plaudits, who needs research studies? Never mind that they may show that refusal to hand over bodies intensifies hatred of Israel and encourages Palestinian violence.

Next week, Israel’s security-diplomatic Cabinet is expected to debate proposed death penalty legislation for terrorists. The objection by different security branches to the law has not deterred Defense Minister Avigdor Liberman, who is leading the initiative. He has even threatened to bring down the government if the religious parties in the coalition continue resisting the bill. Netanyahu, who has in the past objected to the death penalty, adapted his views to the findings of polls indicating support among right-wing voters for the execution of terrorists — only Palestinians ones, of course. Poll findings presented March 4 at the annual Sderot Conference on Israeli Society suggest that almost 70% of Israeli Jews support the death penalty for terrorists who kill Jews.

In an article in Haaretz, former Shin Bet security agency head Ami Ayalon and researcher Idit Shafran Gittleman wrote that numerous debates had been conducted about the death penalty during the terrorist attacks of the second intifada. Participants had concluded that not only does the death penalty not pose a deterrent, it could even enhance the martyr ethos among young Palestinians. “Woe to the state whose elected officials do not tremble before signing populist legislation for political needs, even when it runs counter to the position of the defense establishment and could even result in the deaths of Israelis in revenge terror attacks and intensify the cycle of violence,” the two wrote. How true. How depressing.