Is Israel prepping its public for third Lebanon war?

Israel is multiplying its diplomatic efforts against Hezbollah’s missile project, while examining possibilities of preventive strikes. 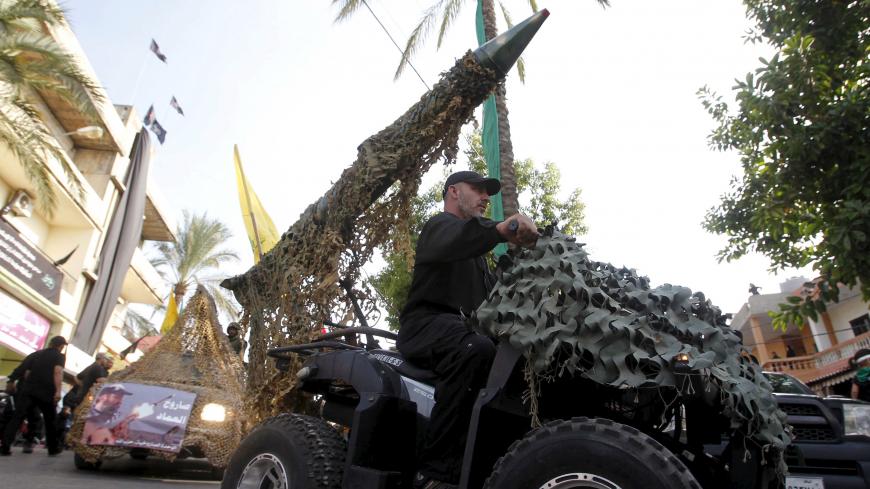 A Hezbollah member drives a four-wheel motorbike mounted with a mock rocket during a re-enactment of the Battle of Karbala during a mourning process, ahead of the day of Ashura, Saksakieh, Lebanon, Oct. 18, 2015. - REUTERS/Ali Hashisho

Any analysis of recent remarks and moves by Israeli decision-makers and the heads of the country’s security apparatus raises the reasonable possibility that they are preparing the Israeli public for a “war of choice” in Lebanon.

This concept of a “war of choice” is especially sensitive in Israel. Ever since the founding of the state, its leaders have always tried to fight just those wars that were forced on it by its enemies or by circumstances. In contrast, the first Lebanon war (1982) is the best example of a “war of choice,” which evolved into a lengthy catastrophe. The second Lebanon war broke out in 2006, after Hezbollah abducted two Israeli soldiers.

The impression that Israel is preparing public opinion for a “preventive strike” that it would initiate along the northern border has been getting stronger over the last year. On Jan. 29, President Benjamin Netanyahu set off on a quick visit to Moscow, where he had another meeting with Russian President Vladimir Putin. It was the seventh meeting between the two men in two and a half years, an unusual meeting frequency for heads of states. In fact, the two men meet more or less every quarter. Putin and Netanyahu have been “going steady” ever since the Russians first appeared in the Syrian sector. So far, this close relationship has succeeded in preventing friction between the Israeli and Russian air forces, which are operating in the same region, sometimes simultaneously.

The problem is that Netanyahu’s agenda is broader and more pressing than any mechanism to prevent friction between the two armies. What Netanyahu is trying to make sure Putin understands is that if the Russians don’t stop the Iranians from infiltrating Syria and Lebanon, Israel will do it itself. If Israel does it, it has the potential to cause a resounding conflagration, threatening Russia’s enormous military achievements throughout the region. What Netanyahu is trying to do is to present Putin with a painful choice. While he does not expect Putin to expel the Iranians from the region, he does expect Putin to make things difficult for the Iranians. He wants the Russians to limit Iran’s movements, and if Israel decides to intervene militarily, not to interfere.

Defense Minister Avigdor Liberman said as much Jan. 29: “We are determined to prevent Iran from gaining a foothold in Syria.” He continued, “We know about the missile facilities in Lebanon [the Precision Project], and we know about the people involved in manufacturing those missiles. … We are using all of our leverage, diplomatic and otherwise, to prevent this missile manufacturing. It's possible to stop what is happening in Lebanon through more than just bombs. I think there are still enough resources, enough options, and we are utilizing all of them.”

This was the first time that Israel stated publicly that it was keeping tabs on those scientists and engineers involved in the Precision Project for missiles in Lebanon and Syria. In addition to Liberman, another surprising player joined the fray this week. This was Brig. Gen. Ronen Manelis, who took the unusual step of publishing an article in the Lebanese opposition press. In it, he warned Hezbollah, Iran and the people of southern Lebanon that they are sitting on a powder keg and that any future attack on Israel will result in a dangerous conflagration.

Israel has made the transition from covert to overt threats. Netanyahu is bringing the heads of his intelligence agencies to his meetings with Putin, particularly Mossad Director Yossi Cohen and Military Intelligence head Maj. Gen. Herzl Halevi. This provides Putin with an intimate look at high-quality intelligence collected by Israel that focuses on Iran’s plans to establish itself in Syria and Lebanon to create arsenals for precision missile batteries that pose a strategic threat to Israel, and with that, to continue expanding their influence in the region. This intense dialogue between the Israeli and Russian security forces has evoked considerable surprise and consternation in Washington, but the Israelis have their explanations as to why this is necessary.

The tactic now taken by Netanyahu and Liberman is to convince Putin that from his perspective, too, Iran has gone from being an asset to a liability. In order to do this, Netanyahu must tell Putin something like this: We realize that you needed Iran during the war against the Islamic State and the rebels, because they provided the fighting force, but the situation is different now. Now they are competing with you over who will rehabilitate Syria and wield influence there. They continue to sow terror wherever they can around the world and undermine stability. What you have to realize is that we cannot let them establish themselves in Lebanon and Syria or to continue with their Precision Project. If they are not stopped by the international community or the superpowers, we will have no choice but to stop them ourselves. This could result in a renewed conflagration in the region, putting all of Russia’s achievements here into question.

Although it has been a long time, Israel has not forgotten the enormous anti-aircraft missile fiasco, which resulted in the disastrous 1973 Yom Kippur War. At the time, Israel ignored the fact that the Egyptians moved their sophisticated Soviet anti-aircraft missile batteries beyond the lines agreed upon at the end of the War of Attrition. Because Israel was so exhausted and wounded, it chose to ignore that development. The fact that the missiles were advanced allowed Egypt to cross the Suez Canal in 1973 and attack the Israel Defense Forces, without the Israeli air force being able to stop teh Egyptians. What Israel now fears is that history will repeat itself with the Precision Project.

This presents the Israeli leadership with no easy dilemma. A strike to prevent Iran from establishing itself in the sector will ignite the entire region. Tens of thousands of missiles and rockets will be fired at strategic targets in Israel. The cost to Israel will be steep, even if the cost to the opposing party will be much steeper.

What Liberman’s remarks really show is what is assumed to be Israel’s tactical approach. The first stage is to block the process through diplomatic means. The long series of meetings with Putin is just the tip of this effort, and there is a concentrated, parallel effort to convince the US administration to intervene. Should this fail (as it seems so far), Israel will advance toward a covert military solution. This is what Liberman was hinting at when he said, “We know about the people involved in manufacturing those missiles.” This effort will be similar to everything that Israel did over the past decade in order to stop Iran’s nuclear project.

If this effort also fails, Israel will be forced to make a very difficult decision. Should it launch a preventive strike in Lebanon and Syria and risk a catastrophe, or should it show self-restraint and flow with events, just like it did in 1973? The question isn’t which option is better, but which is less bad.