Contrary to Prime Minister Benjamin Netanyahu, Yesh Atid leader Yair Lapid wholeheartedly embraced the threats by the Trump administration to cut UNRWA financing, which has the potential to create a humanitarian catastrophe in the Gaza Strip. 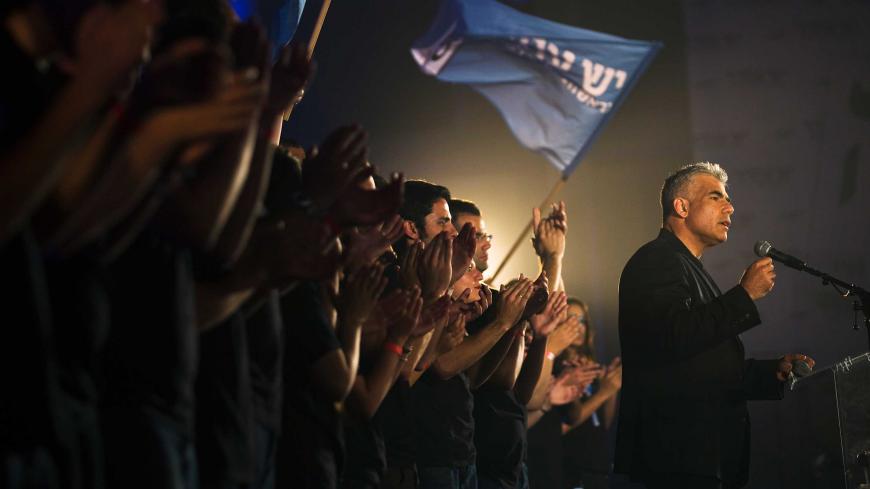 Yair Lapid, the head of Yesh Atid, speaks to supporters during a conference in Holon near Tel Aviv, Israel, March 12, 2015. - REUTERS/Amir Cohen

Israel’s opposition spent recent days struggling against the supermarket law (which would have enabled the interior minister to shutter businesses on the Sabbath) and against governmental corruption. After these passionate struggles, it was disappointing to see a main center-left party toe the line of the populist right-wing agenda on a core diplomatic-security issue. More specifically, it was disappointing to see the way Yesh Atid Chairman Yair Lapid embraced an ultimatum conveyed by US President Donald Trump to the Palestinians.

On Jan. 2, Trump tweeted a threat to cut monetary assistance to the Palestinians because of their refusal to renew diplomatic negotiations with Israel: “We pay the Palestinians hundreds of millions of dollars a year and get no appreciation or respect. They don’t even want to negotiate a long overdue peace treaty with Israel. … But with the Palestinians no longer willing to talk peace, why should we make any of these massive future payments to them?”

The presidential tweet, which appears to have been planned, rather than rash or instinctive, appeared on Twitter several hours after US Ambassador to the United Nations Nikki Haley threatened that if the Palestinians don’t return to the negotiating table, the United States might well halt its aid to the United Nations Relief and Works Agency for Palestine Refugees in the Near East (UNRWA). The Palestinians, who have not yet recovered from Trump recognizing Jerusalem as Israel’s capital in December, hit back. “We will not be blackmailed,” said Hanan Ashrawi, a member of the PLO's Executive Committee, in a Jan. 3 statement. “Palestinian rights are not for sale.”

The Israeli political system responded variously to Trump's threat, from support to silence to criticism. Prime Minister Benjamin Netanyahu — who recognizes the explosive potential of the Gaza Strip as a territory in the throes of a humanitarian disaster even before a cutback in aid — took care not to publicly rejoice over Trump’s statement. While the prime minister of course welcomes Trump’s continuing showering of gifts, Netanyahu was ambivalent in this instance.

One expression of this ambivalence was reported on by News 2 in a Jan. 4 exclusive report. According to that story, the Foreign Ministry, which Netanyahu heads, opposes Trump’s threatened move because it would likely lead to humanitarian catastrophe in Gaza. The report also revealed that Netanyahu is maintaining behind-the-scenes contacts with the Americans to find the best way to “walk between the raindrops,” namely between lending principle support to Trump (in whatever he decides on the region) and the fear of a catastrophe in Gaza. In this respect, the Israeli defense establishment shares the same view as the Foreign Ministry’s experts.

Among opposition party leaders, Avi Gabbay of the Zionist Camp and those of the Arab parties (Joint List) chose, each for their own reasons, not to react to Trump’s statements. Lapid, however, took advantage of the situation to siphon a few more votes from the right.

“The US president is right,” Lapid tweeted. “Aside from the fact that UNRWA acts as a shield for terror, it is also responsible for the fact that the 750 thousand [Palestinian] refugees in Israel from 1948 (most of whom have died already) have morphed into today’s fake 5.5 million ‘refugees’ who were never expelled from anywhere. UNRWA has long since lost the mandate for which it was created.”

Meretz Chair Zehava Gal-On rose to redeem the honor of the opposition, stating the obvious on Twitter: “I understand that it’s considered popular now to clap our hands every time Trump declares that he’ll mess up the Palestinians even more. But any deepening of the humanitarian crisis in Gaza, and the [specter of the] collapse of the Palestinian Authority and security cooperation [with Israel], constitutes playing with fire. We haven’t even finished yet with the deterioration that took place since the last time people here applauded Trump.”

Unfortunately, Gal-On has remained more or less a lone voice. It is perhaps absurd that, in this instance, Gal-On is closer to the position of Netanyahu's Foreign Ministry than Lapid is, even though a considerable proportion of Lapid’s electorate comes from the left.

In essence, Lapid’s response is even farther right than the Likud's. This is true even though the hot-potato issue under discussion could set Gaza on fire, according to the Foreign Ministry and the Israel Defense Forces. Lapid, who aspires to the premiership, chose in this case to present a passionate but simplistic stance to show the right that he doesn’t really care about the Palestinians. He was not able to view the picture from all angles, including the dangers involved in adopting such a course of action.

This is not the first time that center-left leaders have joined ranks with Netanyahu on diplomatic-security issues. The same thing happened in October when Trump delivered an aggressive speech on Iran in which he threatened to cancel the nuclear deal signed during the tenure of his predecessor, Barack Obama. At the time, satisfaction in Israel crossed party lines, with Gabbay and Lapid both partaking in the anti-nuclear deal rhetoric led by Netanyahu. This was despite current and former senior members of the Israeli security apparatus expressing opposition to nullifying the agreement. Among them was former Prime Minister Ehud Barak, who argued that such a step would only lead to Iran producing the bomb even sooner. Another example relates to the settlement issue. In October, Gabbay shocked the Labor Party’s political base when he declared that the settlements would not necessarily have to be evacuated within the context of a peace agreement.

The Trump administration's threats against UNRWA offered Israeli opposition leaders an opportunity to differentiate themselves politically from the Netanyahu government and to present an alternative to the public. With all due respect to the struggles against the supermarket law, corruption and religious coercion — and indeed, such opposition activism deserves respect — anyone who views himself as an ideological alternative to Netanyahu should conduct himself as such on all issues. The center-left public deserves a strong leadership to represent it courageously and authentically.