Prime Minister Benjamin Netanyahu has managed to shift the public's focus from his son Yair's nauseating behavior to trying to legislate the ability of workers to make recordings of government ministers. 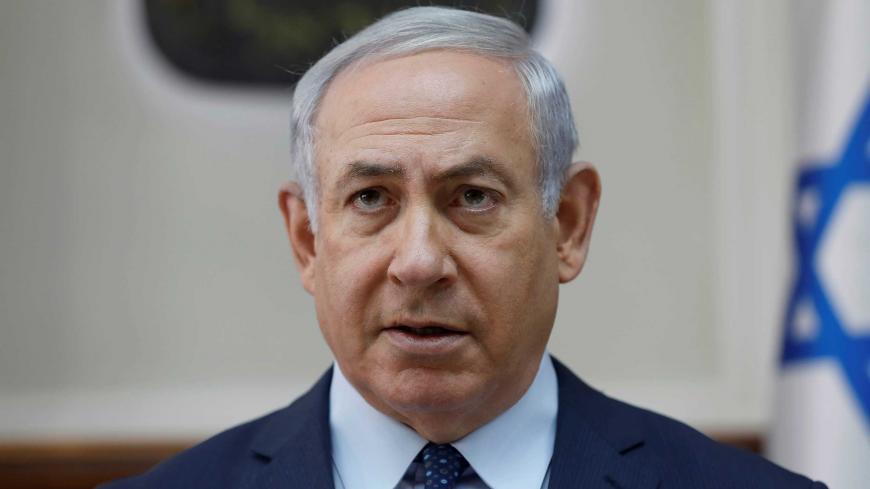 The audio recording of Yair Netanyahu’s night of excess continues to make waves in Israeli politics. On Jan. 11, three days after the recording was aired, Prime Minister Benjamin Netanyahu and several of his most loyal ministers began calling for new rules and legislation to prevent themselves from being recorded by workers in their immediate vicinity. These calls served to stir attention away from the discussion surrounding the junior Netanyahu's behavior.

The prime minister skillfully diverted the discussion at a Cabinet meeting originally scheduled to go over the state budget, turning it instead toward the “need” to take urgent steps to protect ministers from being recorded and extorted. Netanyahu couldn't have hoped for better spin. After all, the whole world has been privy to the nauseating way his son spoke about women and his visits to strip clubs with a state-appointed, taxpayer-funded driver and security guard at his beck and call.

It took Netanyahu three whole days to shift the focus. Once he got over the shock, and after a feeble apology and a complaint about how his family is being persecuted, Netanyahu managed to focus the public's attention elsewhere by enlisting the support of his ministers in a fight against the man who supposedly recorded his son along with any would-be recorders in the future.

Kicking off the discussion at the Cabinet meeting was Culture and Sports Minister Miri Regev. It is quite possible that she first coordinated her remarks with Netanyahu to serve as the trigger for dealing with the issue. Regev called for an investigation into the leak of the recording and complained that ministers have become hostages to their drivers and security guards.

“We are being threatened, and they are even trying to profit from selling it to the media. We can’t become punching bags to be attacked at any given moment,” Regev said, adding that it has become impossible to go anywhere without being recorded and that it was the lowest of the low in media ethics. She then recommended that the government form a commission of inquiry to investigate the matter.

In Israel, most of the drivers who daily chauffeur public figures are considered to have “confidence jobs,” but they are not necessarily civil servants. The case with members of security details is similar. Some bodyguards actually work for private companies. According to reports, in Yair Netanyahu's case, the driver, not his bodyguard, allegedly recorded him.

After Regev's warm-up act, Netanyahu took things a step further. He claimed that the Channel 2 news network had paid tens of thousands of shekels for the recording, announced that the media had crossed red lines, even for them, and said that he had spoken with in-house counsel in the Prime Minister's Office to see what legal steps might be taken. He also asked counsel to look into whether it would be possible to take legal action against the employee responsible for the recording and to interrogate him for a violation of trust.

According to sources present at the Cabinet meeting, Netanyahu then turned to Justice Minister Ayelet Shaked, who was reluctant to participate. She responded that she would look into the possibility of passing legislation on the matter.

As if that were not enough, Agriculture Minister Uri Ariel joined in the calls to investigate the matter. He wrote a letter to the prime minister, demanding that he instruct the director of Shin Bet to investigate the “leak of the secure recording.” Ariel concluded his letter with the threat that if it doesn't happen by the end of the month, he himself will refuse to have a bodyguard.

It is unclear where Ariel came up with the ridiculous idea of ordering Shin Bet to expend manpower and resources on investigating where the recording came from and under what circumstances. It sounded as if Yair Netanyahu had been the victim instead of someone who spoke disparagingly about women while spending the evening in the company of strippers. Obviously, no one can decide for Yair where and with whom he should spend his free time, but as soon as it involves a car provided for him by the state and in front of state employees charged with his security, it is no longer his private business.

This attempt to kill the messenger is more than just irksome. It is infuriating. It indicates a real crisis among the other ministers, who were struck with the sudden realization that they could also be recorded and photographed in various compromising situations. True, it is not a good feeling to be recorded by someone in your immediate sphere, but at the same time, it cannot be prevented by legislation or intimidation.

The best way to avoid such an event is not to use crass language, not to abuse the people working for you and not to break the law, even if you think that no one can see you or hear you. In this age, in which technology has made documentation easy and cheap, the rules of the game have changed. For example, in 2015, Regev was recorded during a meeting in her office calling former Attorney General Yehuda Weinstein “trash” and his staff “shit.” She did so in response to his decision to prevent her from defunding the Al-Midan Theater in Haifa.

The recording reached Channel 10 News, which broadcast it. Although Regev did not break the law, her comments and style were inappropriate and embarrassing. More important, it gave the public insight into how the esteemed minister speaks and conducts business behind closed doors. That is why any question about the person who recorded the conversation (and who was apparently in the room) are utterly irrelevant. It is like the debate over the morality of actions by Shula Zaken, the confidante of Prime Minister Ehud Olmert whose recordings eventually incriminated him. Ultimately, such questions are meaningless.

Ministers who complain that they are open to extortion and who believe that they can only defend themselves through legislation to prevent their being recorded need to rethink their strategy. That train has already left the station. Ministers' claims that they cannot trust their drivers and secretaries, as Minister Yuval Steinitz complained, are meaningless generalizations. The vast majority of their staffs do not record the people working alongside them.

It is safe to assume that the establishment media would not release banal information about the personal affairs of the prime minister, or any minister for that matter. Accusing the press and turning all drivers and secretaries into potential suspects testifies to the state of confusion that comes with the failure to understand changing times. No one has violated ministers' privacy in their immediate sphere. As soon as they are in their work environment as public servants, they must take into consideration that they are exposed.

The #MeToo campaign against sexual harassment signaled the end of one era and the start of another with new rules and norms. The same is true when it comes to recordings: “The bastards changed the rules.” Not a single red line was crossed in the case of Yair Netanyahu, as his father wants us to believe. The only person to cross a red line was Yair.