A leaked video from 1989 shows how Ali Khamenei became supreme leader of Iran. 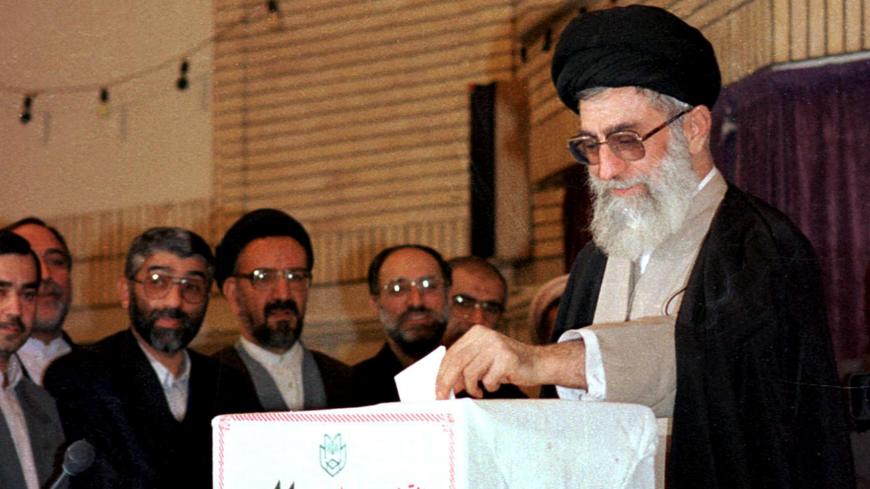 A newly released video has shown the process in which a body of 74 clerics elected then-President Ali Khamenei to the highest position in the decade-old Islamic Republic, a position he has held for nearly three decades. While parts of the video from the June 4, 1989, Assembly of Experts meeting have been seen before by Iranian viewers, the entire, complete version not only shows the intricacies of the election process but offers new information that was not public knowledge.

The video begins with a discussion about whether or not the assembly should elect a single individual to replace Supreme Leader Ayatollah Ruhollah Khomeini, the founder of the Islamic Republic who had died the day before at age 86, or whether the assembly should elect a governing council of three to five individuals. Ayatollah Akbar Hashemi Rafsanjani, who chaired the meeting, calls for a vote on whether there will be an individual election or council.

This is where one of the lesser-known facts comes out of this meeting. The election, according to Rafsanjani, was to be a temporary one until the necessary constitutional changes could be made. Someone from the floor asks that the temporary nature of the election not be made known to the public and Rafsanjani agrees. By standing, 45 members of the assembly vote in favor of holding an election for an individual.

Once Rafsanjani announces that the group will move forward with an election for an individual, a member of the Assembly of Experts recommends Khamenei, who was then 49 and is now 78. Rafsanjani then asks the Assembly if it is all right to quote personal meetings he had with Khomeini and the assembly members agreed. This is where Rafsanjani played a significant role in Khamenei’s elevation from a constitutionally weak president to the most powerful position in the country.

Rafsanjani begins by saying that Khomeini had specified that only those things he had said publicly or had written should be accepted as his words. Rafsanjani then says what he is about to say is not one of those things. Rafsanjani then shares three instances when Khomeini had recommended Khamenei for the supreme leadership. One occurred in the presence of what Rafsanjani termed the three heads of the government, the prime minister and Ahmad Khomeini, Khomeini’s son and right-hand-man. A second instance took place when Rafsanjani and Khomeini were alone. The third, according to Rafsanjani, was between Khomeini and his son Ahmad.

Each time the issue of Khomeini's successor comes up was due to Rafsanjani’s prompting, especially since the deputy supreme leader, Ayatollah Hussein Ali Montazeri, had been sidelined. Rafsanjani says that because the next leader must be a marja, they do not have anyone to present. A marja is the highest level of authority in Shiite Islam and has the authority to make legal and religious decisions for his followers and less-credentialed clerics. It was also one of the stipulations for becoming a supreme leader in Iran’s constitution.

The most viral section of the video is when Khamenei takes to the podium and addresses the assembly. “Tears of blood must be shed that in an Islamic society there is the possibility of the election of someone such as I,” Khamenei begins in an exaggerated sense of humility. He continues that his election has both “technical and fundamental” issues pertaining to the fact that he is not a marja. Because of this, he adds that it would be a “superficial” leadership rather than a real one.

Khamenei says that the supreme leader’s rulings must be accepted but that some individuals in the meeting rejected the idea that he was religiously qualified. After some back and forth, most of which was not audible, Rafsanjani interjects, saying that in those cases that Khamenei was not qualified, he could seek advice from those who are qualified. In the end, Rafsanjani calls for a vote. However, in the call for the vote, he emphasizes that the outcome would be a temporary one until the constitution is changed — according to Khomeini’s wishes expressed in a letter. After a referendum nearly two months later approved the constitutional changes, Khamenei was able to assume the most powerful position in Iran on a permanent basis.