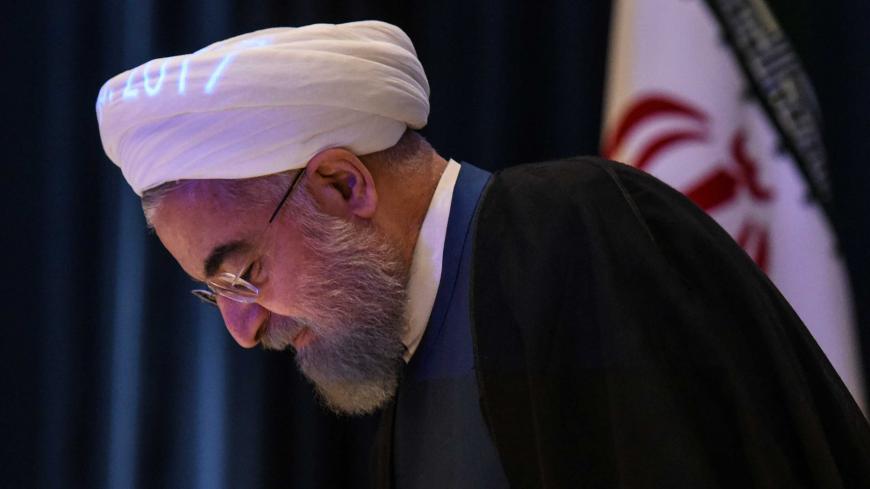 A video projection is seen on the head of Iran's President Hassan Rouhani as he arrives for a news conference during the United Nations General Assembly in New York, Sept. 20, 2017. - REUTERS/Stephanie Keith

Iranian President Hassan Rouhani’s first televised interview after the recent unrest appears to have failed to alleviate much of the public's angry feelings.

Popular TV host Reza Rashidpour, who is a Reformist, was chosen for the first time by Iranian state TV to interview Rouhani. While he promised viewers a challenging interview, this did not happen, and both the public and analysts slammed both the interviewer and Rouhani.

In the televised interview conducted Jan. 22, the moderate Rouhani answered detailed questions and rumors about himself and the country, turning the show into the first presidential interview in which Rouhani — known as the “diplomat sheikh” — didn’t once talk about foreign policy or mention the nuclear deal.

Asked about the recent weakening of the rial, Rouhani said, “We have no shortage of foreign exchange and this fluctuation is not long-term.” He also denied rumors that the government was seeking to address its budget deficit by intentionally not supplying enough currency to the market to benefit from the arbitrage between the official and open-market exchange rates.

Mentioning the recent unrest even though the subject was not brought up by the interviewer, Rouhani said, “Protest within the framework of the law is accepted, but undue tensions and unrest cause concerns for the people.”

In response to a question about failing credit — and financial institutions that haven’t been able to return the money of depositors — Rouhani said, “Some [financial institutions] defrauded people by empty promises of [high] interest [rates], but we will fully solve the problem.”

Raising the issue of dust pollution in southwestern Iran, Rouhani said the government has started a comprehensive plan to address the domestic source of dust. “Air pollution is one of the people's top concerns, and I will never forget the people of Khuzestan and other provinces' kindness,” he said.

The president also addressed the recent debacle over the temporary blocking of Telegram, saying the government has suffered for unblocking the popular smartphone app. Rouhani further explained that his attempts to unblock Twitter have failed so far.

The interview didn’t lead to the outcome Rouhani and Iran's state TV appear to have sought. Sadegh Zibakalam, a prominent Reformist analyst, tweeted afterward, “I wish Mr. Rouhani could realize that every time he talks to people, he loses another part of his 24 million votes. I wish he could understand that he is insulting people’s intelligence by [focusing on] artificial nonsense and superficial questions and answers instead of addressing serious and real issues and problems in the society.”

Mohammad Hashemi, a moderate figure, slammed state TV for their questions to the president, telling local media, “The main problems were the questions that were given to the [TV] host. These questions were [designed] by the state TV — critics of the president — and they just sought to make him promise [things to people] and harm him.”

He added, “Superficial and detailed questions during the [show] led — for example — the president not to give a four-month report [of his government performance]."

Iranians also took to Twitter to express their opinion of the interview. A user named “Majidazarpey” tweeted, “The irony here is that Rouhani raised the [issue of] the [recent] protests in his response to other questions, but [TV host] Rashidpour didn’t [bring up any question relating to these events].”

Another Iranian by the name of “Shayanvalipour” tweeted, “The problem with [Iran’s state TV] hosts is that they try to act as journalists but fail. We have [other] great journalists in Iran who can challenge the president with their questions.”

A user who identified himself as “Pooriua” tweeted, “Rouhani is preventing tension between society and the ruling system. He is doing the right thing, but the way he has [chosen to do this] will result in the government and himself paying all the costs.”