Iranian hard-liner hints Ahmadinejad not completely out of the game

An Iranian hard-line former MP reveals that Tehran Mayor and two-time presidential candidate Mohammad Bagher Ghalibaf was barred from running in the 2009 presidential election — and that Mahmoud Ahmadinejad may not be completely out of the game. 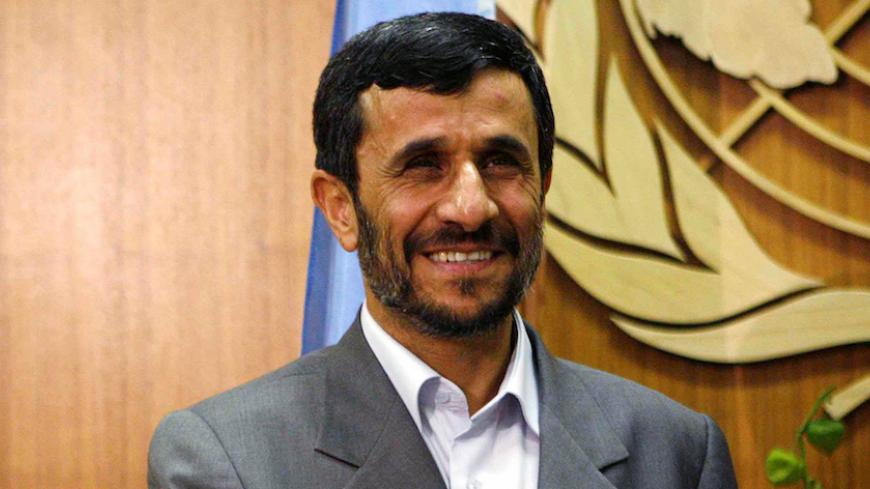 An Iranian hard-line former member of parliament has revealed that Tehran Mayor Mohammad Bagher Ghalibaf was barred from running in the 2009 presidential election, whose aftermath was mired by unrest.

In an interview with Tarikh Online on Oct. 30, Hamid Rasaee spoke about Supreme Leader Ayatollah Ali Khamenei’s effective barring of ex-President Mahmoud Ahmadinejad from running in the upcoming May 2017 presidential election. Rasaee said, “From what I heard, Mr. Ghalibaf had been advised the same in 2009. Mr. [Ayatollah Akbar] Hashemi Rafsanjani had been advised in 2005, too. … Mr. Hashemi didn’t listen and ran [in the 2005 election], but Mr. Ghalibaf didn’t nominate himself and didn’t run [in the 2009 election].”

Rasaee added, “When Mr. Hashemi says … and Mr. [Hassan] Rouhani himself promises that they won’t allow Ahmadinejad to come [forward] again, when [Rafsanjani's daughter] Faezeh Hashemi and Mr. Sadegh Kharrazi say they will sacrifice their blood to not let Ahmadinejad return [to the political stage] — this means that if Ahmadinejad intends to come [forward and run in May], strife and fighting will begin again.”

Rasaee then hinted that if Ahmadinejad wound up not obeying the supreme leader’s advice, this would not necessarily lead to Ahmadinejad's disqualification by the Guardian Council, which is tasked with vetting candidates. “Agha [the supreme leader] himself said that when one thinks about a believer’s good, one should perhaps advise him [on how to best proceed]. The proof of this matter that [such advice] cannot cause anyone to be disqualified is that Mr. Hashemi was advised [the same as Ahmadinejad, but ran anyway].”

Mentioning the unrest in the aftermath of the 2009 presidential vote, the former member of parliament said, “In my opinion, the struggle that happened in 2009 wasn’t Mr. Ahmadinejad’s fault. [They] accuse Mr. Ahmadinejad of saying, ‘These [protesters] are dirt and dust.’ [Iranian state] TV broadcast this, and I was there at Valiasr Square that day. Mr. Ahmadinejad didn’t say those who didn’t vote for him are ‘dirt and dust.’ He said, ‘All 40 million [Iranians] who cast their ballots, our administration belongs to all of them, and we should work for all of them. [Ahmadinejad said,] ‘Some are setting banks on fire, these are dirt and dust’ — and he didn’t lie.”

In response to a question about Rouhani’s chances of re-election in May, Rasaee said, “If Rouhani does get qualified [to run by the Guardian Council] … I think people will not vote for him. He is the first four-year [one-term] president. … Four years ago, Mr. Rouhani won [the June 2013 election] with 50.7% of the vote; 49.3% didn’t vote for Mr. Rouhani. ... That 50.7% who voted for Mr. Rouhani, [they now] see that none of Mr. Rouhani’s promises have been fulfilled. …That 49.3% know that their decision to not vote in favor of Rouhani was right and are convinced their decision was right [and will vote against him again.] But I don’t know whom they will vote for. ... That 50.7% who voted for Mr. Rouhani, many of them know today that they shouldn’t vote for Mr. Rouhani.”

He then added, “Mr. Rouhani put all of his eggs in the basket of the JCPOA [Joint Comprehensive Plan of Action.] One of our problems [with Rouhani] was that he shouldn’t have done this. Today, we are seeing that the chicks have not been born, and that his basket was overturned and that the eggs are broken.”

Of note, hard-liners do not believe that the nuclear deal has had any benefits for Iran and therefore think that it should be annulled. In contrast, moderates and Reformists think that the dividends of the deal will gradually be clear for all to see, and that more patience is necessary to see the fruits of the deal.

Rasaee also responded to a question about Russia’s use of an Iranian air base to conduct airstrikes in Syria earlier this year. He said, “We definitely do not consider Russia [to be the same] as Hezbollah, and we don’t call Putin 'Brother Putin.'” Rasaee added, “We have reached an agreement with Russia on a common goal. An article in the constitution says that we are not allowed to give [access to] our military bases to Russia. … We gave [access to] one of our airports to Russia under a military agreement on [fighting] Daesh [Islamic State]. Russian aircraft were having problems when they were using their own bases on Syrian soil and in Russia. … I don’t see it as necessary to get into details. … But this airport [in Iran] wasn’t used by Russia as a military base; the airport was under our control. … A [foreign] military base means what the US has in the Philippines and Pakistan. They [the Russians] don’t have any control [over any Iranian bases].”