The Egyptian government decided to establish human rights departments in all ministries and governorates in a bid to restore its human rights record following international criticism. 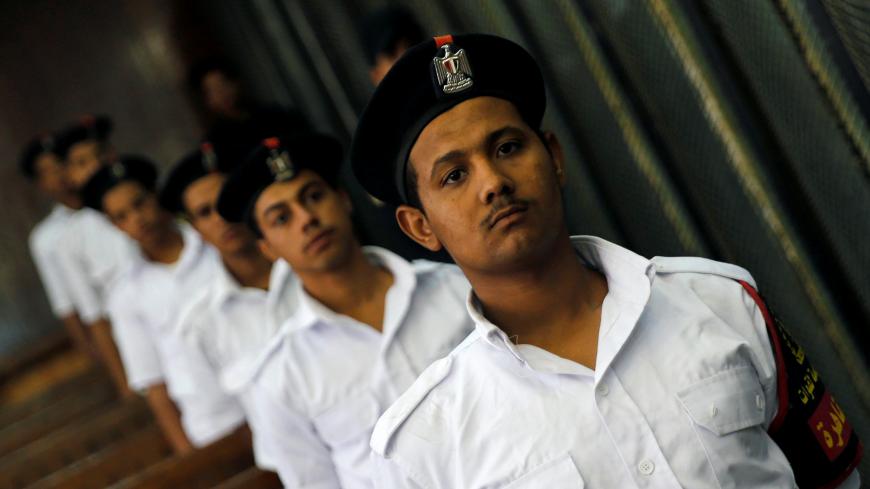 Police officers stand guard as defendants accused of involvement in the 2015 assassination of Egypt's top prosecutor attend a hearing in a cage in a courtroom, Cairo, Egypt, June 17, 2017.

CAIRO — In a move aimed at spreading the culture of human rights in Egypt, human rights departments are expected to be created and number 60 by 2018, with 33 departments in every ministry headquarter and 27 across Egyptian governorates. These departments will be government-affiliated and will receive complaints from citizens about human rights violations.

This indicates that Egypt has started for the first time to reconcile its institutions with human rights issues, taking into consideration all that has been issued and gone viral about Egypt’s bad record in human rights. The executive branch (the government), with the participation of the legislative branch (the parliament), is also expected to take major steps in this direction, including international visits to address Egypt’s achievements pertinent to human rights as well as discussions with foreign media on this subject.

The State Information Service held a conference Dec. 12 in the presence of foreign media and representatives of the government to present the latter’s first report on human rights.

However, this first government report on human rights is said to lack integrity, focusing only on the government’s achievements in this regard, while turning a blind eye to what is really happening on the ground and the suffering of citizens.

According to the report, which was distributed during the conference that Al-Monitor attended, a committee will be set up in the coming weeks in order to develop a national human rights strategy, with the participation of all concerned parties.

The committee will work within a specific time limit on optimizing and complementing the state’s efforts to promote human rights while adhering to the provisions of the Egyptian Constitution. Also, a report on the situation of human rights in Egypt, with all its pros and cons, will be issued every year.

During the conference, Marwan announced that the Ministry of Foreign Affairs is currently working with Egyptian staff holding administrative positions in international nongovernmental organizations to boost effective communication between concerned parties and raise awareness on human rights in Egyptian society.

Answering some of the foreign reporters’ questions, Marwan said, “There are no forced disappearances or detentions in Egypt. People are detained only by a judicial decision.” He stressed that other comments to the contrary are mere allegations by the West against Egypt, such as the Human Rights Watch report to this effect.

According to the government report, the Egyptian government said that human rights are not absolute and should be subject to the law in order to protect the freedoms of others, stressing that the exercise of rights and freedoms varies from one society to another, according to customs and traditions.

Abdel Ghaffar Shukr, the vice president of the National Council for Human Rights, praised the government for this major step, stressing that the government reports should reflect the Egyptian reality and be closely linked to what is happening on the ground.

Shukr told Al-Monitor, “This step comes as a result of the recommendation of the International Council on Human Rights, which has already issued 240 recommendations to Egypt in this regard.” He added that Egypt ought to start working on all these recommendations.

In light of these recent decisions by the Egyptian government to establish a human rights department within each ministry and governorate dedicated to receiving complaints, parliament intends to hold several meetings at the domestic and foreign levels to improve Egypt’s image abroad.

Parliamentarian Alaa Abed, the head of the parliamentary Human Rights Committee, told Al-Monitor, “The committee is closely following up on the preparations in the ministries, visiting all the headquarters successively.”

In the same vein, heads of parliamentary committees met with different political parties and movements at the European Parliament in mid-December to discuss the political, economic and security challenges in Egypt.

The meeting also shed light on the achievements that have been accomplished so far and the democratic turn in Egypt after the completion of the roadmap and the holding of legislative elections, according to parliament member Tariq Radwan, the head of the parliamentary Foreign Relations Committee.

Radwan told Al-Monitor the Egyptian side raised the issue of women, youth and Copts during the meeting, stressing the achievements of parliament on the road to promoting human rights. Radwan said that parliament passed several laws, including the law regulating the construction of churches, combating illegal immigration, not to mention the Law on Persons with Disabilities, which will be voted on this month.

Tariq al-Khouli, a member of the parliament’s Foreign Relations Committee, told Al-Monitor that Egypt “is taking concrete steps with regard to human rights and is still seeking to achieve more gains without any recommendation from any specific party but has yet to reach an optimal situation, which is only normal, as there is no such thing as an ideal human rights situation.”

Khouli told Al-Monitor that Egyptian President Abdel Fattah al-Sisi has approved the list of names of prisoners to be released in cases of freedom of opinion and expression. The list was prepared by the Detained Youth Committee for Presidential Pardon, formed by a decision issued by Sisi on Oct. 27.

Khouli also criticized the double standards in the way some countries assess human rights, using them as pretexts to start wars in other countries. He noted that Egypt still has to fill the gap in communicating at the foreign level when it comes to human rights, which allowed the Muslim Brotherhood to take advantage of the situation.

Khouli confirmed that the parliamentary Foreign Relations Committee has begun to shed light on this issue. During parliament’s session in October, the committee set a plan of action to conduct intensive shuttle visits to several influential parliaments, such the US Congress, the Russian State Duma, the Italian parliament, the Chinese National Assembly, the Japanese National Diet and the British House of Commons, to forge strong networks of relationships in terms of human rights.