A US sale of F-16 fighter upgrade kits to Greece's outdated fleet could increase tensions with Turkey, or it could be offset by the Turkish president's historic visit to Athens this week. 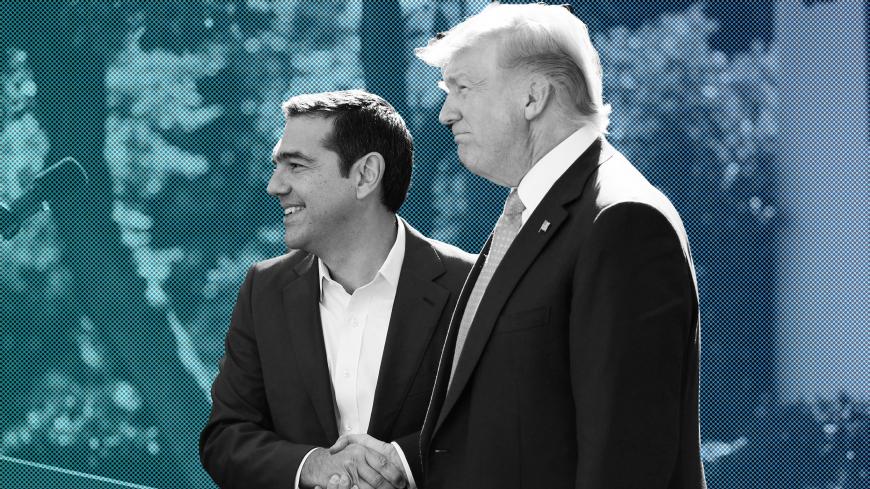 It's unclear what effect Greece's pending F-16 upgrades might have on the country's ties with Turkey, but the often-antagonistic nature of their relationship is unlikely to change much.

The United States and Greece recently agreed to an upgrade of Greece’s F-16s at an estimated cost of $2.4 billion, although the final price hasn't been determined. The sale includes more than 120 upgrade kits from Lockheed Martin to retrofit Greece’s fourth-generation fighter jets.

“Greece has always been a reliable ally, and we’ve always been very reliable to them,” US President Donald Trump declared at an Oct. 17 joint press conference on the White House lawn. At the adjacent podium, Greek Prime Minister Alexis Tsipras added that the countries' bilateral relations were “at their best since World War II.”

Dimitris Tsarouhas, an associate professor in the department of international relations at Bilkent University in Ankara, told Al-Monitor, “Tsipras' visit to the US was a foreign policy success for a government that is under domestic pressure. The secured deal is one that Greece had requested for some time.”

Much of the reaction in Greece, however, focused on the controversial aspects of the deal. Members of Tsipras’ left-wing Syriza Party were shocked that the cash-strapped government would be investing billions with the United States. Creditors in Brussels were also reportedly upset, as they had not been consulted.

Less attention was paid to what implications the military sale would have outside of domestic politics — specifically for Turkey.

“The [upgrade] decision is partly motivated by Turkey’s planned acquisition of the F-35 next-generation fighter from the US, as well as of the S-400 long-range air-defense system from Russia,” Thanos Dokos, the director general of Athens-based ELIAMEP (Hellenic Foundation for European & Foreign Policy), told Al-Monitor. The US sale to Greece also comes on the heels of the United Kingdom's $135 million defense deal to assist the Turkish air force in developing fighter jets.

Relations between Turkey and Greece have fluctuated since the Ottoman Empire. Maritime and airspace demarcations provide constant sources of tension. In 1931, Greece declared a 10-mile airspace radius, recognized by Turkey until its 1974 invasion of Cyprus. Turkey later refused to acknowledge the airspace, which extends 4 miles beyond Greece’s waters. The first airspace violation occurred the following year, and violations are ongoing. Turkey cites the International Civil Aviation Organization (ICAO) of 1948. Greece counters this point on the grounds that its 1931 border, originally recognized by Turkey, predates the ICAO.

“During the last few years, Turkey has been conducting frequent low-level overflights of Greek islets and islands whose sovereignty Ankara started disputing rather recently,” explained Dokos. Diplomatic conflicts have persisted into 2017, most recently over the Kardak (Turkish) or Imia (Greek) islets near the Turkish coast, after the Greek deputy minister of shipping and island policy announced new plans to bring residents to the previously uninhabited islands.

“Turkey’s political objective is to promote its claims regarding maritime zones in the Aegean. Challenging the sovereignty of inhabited islands is a highly escalatory and potentially destabilizing policy of brinkmanship, however,” said Dokos.

During one day in May, Turkey entered the disputed airspace a staggering 141 times, prompting the Greek Ministry of Foreign Affairs to declare it “a flagrant violation of international law."

"It is clear that there are forces in Turkey that do not want understanding and good neighborly relations between the two countries," the ministry said.

Tsarouhas said, "[Such encounters] over the Aegean will persist for as long as there is no political settlement between the two sides." He noted, however, that Turkish President Recep Tayyip Erdogan is making a historic trip to Athens Dec. 7-8 as the first Turkish president to visit the country in 65 years. This indicates “avenues of dialogue remain fully open … thus minimizing the possibility of conflict escalation,” he added.

While it is in both countries’ interests to pursue peaceful relations, “Greece's security relationship with Turkey is [also] on rocky ground due to deepening tensions between Turkey and the West,” James Sawyer, a researcher at the London-based Eurasia Group, told Al-Monitor.

With this F-16 upgrade, are Athens and the United States signaling to Ankara their refusal to put up with more airspace violations?

Not entirely. The United States has historically taken no position on the Aegean disputes, as both Turkey and Greece are NATO allies. Sawyer noted, “Turkey has also irritated ties with NATO allies by detaining foreign nationals and threatening to use hostage tactics to compel other countries to hand over suspected Gulenists.” He was also quick to point out, however, that the United States and the EU — Greece included — are “keen to maintain pragmatic ties with Turkey.”

Sawyer added, “The EU continues to view Turkey as a vital partner in its effort to control refugee flows. Greece has likewise opposed other member states that have pushed for the EU to sever ties with Turkey, preferring instead to remain engaged. Even as the US views Turkey with growing suspicion and frustration — in particular due to Turkey's unscrupulous attempts to arrest locally employed staff of the US mission in Turkey — they are still looking for ways to keep the embers alive in the hopes that the relationship improves with time.”

And while the airspace encounters are likely to continue, Greece and Turkey perhaps feel more important things are at stake: a trio of joint projects including a border bridge, high-speed train and ferry connections; refugee migration between the two countries; and intelligence cooperation against terrorist organizations.