The announcement of a Saudi-led bloc’s new terrorist list that includes the International Union of Muslim Scholars has tongues wagging about the failure of Tunisia’s Ennahda movement to break free from political Islam. 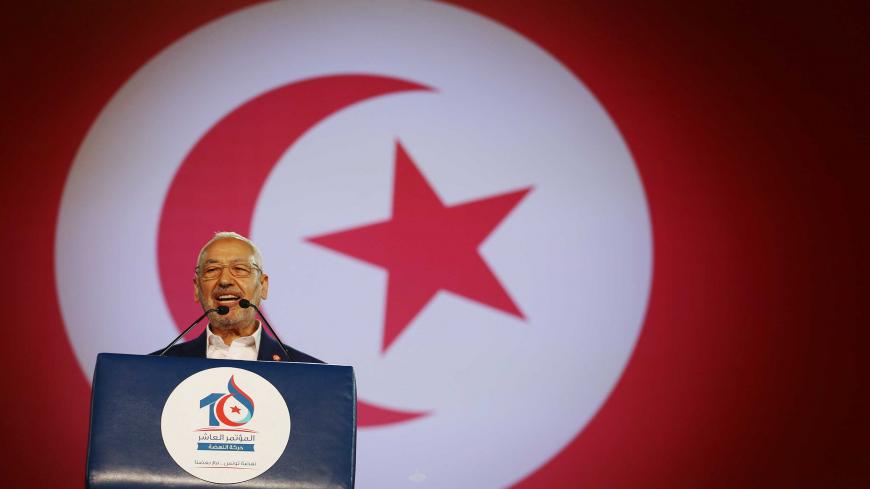 Rachid Ghannouchi, the leader of the Islamist Ennahda movement, speaks during the movement's congress in Tunis, Tunisia, May 20, 2016. - REUTERS/Zoubeir Souissi

TUNIS, Tunisia — On Nov. 22, the countries boycotting Qatar classified the Muslim Brotherhood as a terrorist organization. This has revived accusations that the Tunisian Ennahda movement still espouses political Islam despite announcing that it has changed.

In May 2016, Ennahda leader Rachid Ghannouchi declared the movement a "civil and democratic political party” that separates its political and religious activities. The declaration came on the sidelines of Ennahda’s 10th national conference, a landmark in the political and ideological progression of the movement marking its shift to Islamic democracy.

This transformation, however, did not win the movement political acceptance in Tunisia, where Ennahda has been accused of duplicity in its political discourse and failing to become a civil party.

The position of Ennahda’s deputy head Abdelfattah Mourou reinforced the perception that the movement has no intention of ending its role as a religious reference. On May 31, 2016, a few days after Ennahda’s 10th conference, Mourou stated in an interview with Tunisian Echourouk TV, “Ennahda has not and will not change its identity, and it will stick to its Islamic reference and strategy.” He also denied any existing or prior link between Ennahda and the Muslim Brotherhood.

Accusations against Ennahda of duplicity and continuing its orientation of political Islam jumped over the last couple of weeks after Saudi Arabia, the United Arab Emirates and Bahrain added 11 individuals and two entities, including the International Union of Muslim Scholars (IUMS), to their terrorist list on Nov. 22. The Doha-based IUMS is an independent Islamic organization headed by Yusuf al-Qaradawi, who is also a prominent leader of the Muslim Brotherhood.

Ennahda denounced in a statement the reported inclusion of Ghannouchi, who is also a member of the IUMS, on the terrorist list as a “desperate attempt” to distort his image. The movement also hinted at possible lawsuits against some media outlets for having promoted the news. Ennahda also denounced the inclusion of the IUMS on the terrorist list, stressing the need to protect institutions and scholars with a “history of righteousness and forgiveness.”

BBC Arabic had listed Ghannouchi as one of the individuals included in the terrorist list, only to later apologize for its mistake.

Ghannouchi told Al-Monitor, “The classification of the IUMS as a terrorist organization by the Gulf countries boycotting Qatar could be considered an episode of the Gulf crisis.” He expressed confidence that as the Gulf crisis is resolved, the classification will be withdrawn. “We consider that politically classifying organizations as terrorists and adding moderate figures and unions of scholars to terrorist lists is a strategy to weaken the war on terrorism.”

Commenting on the Tunisian political parties that oppose the ruling coalition shared between Ennahda and Nidaa Tunis and have formed a parliamentary bloc to compete with the coalition, Ghannouchi stated, “These parties calling for the removal of Ennahda from power have no chances of success.”

He pointed to the strong ties between his party and Nidaa Tunis and the success of their coalition in maintaining stability and ensuring parliamentary support for the government. He affirmed that Ennahda has become a stabilizing force in Tunisia.

Political analyst Bassel Terjman told Al-Monitor, “The Gulf countries’ classification of the IUMS as a terrorist organization aims to embarrass Ennahda in Tunisia, even if the movement has repeatedly denied its relations to the organization.”

Terjman added, “Since Ennahda took the reins of power, it failed to convince its opponents of the objectivity of its stances and its seriousness in cutting ties with the Muslim Brotherhood and the IUMS. Such moves would be in line with its transformation into a civil political party that has no links to political Islam.”

Terjman considers Ghannouchi’s attempts to succeed Qaradawi as head of the IUMS during his participation in the union’s conference in Istanbul in 2014 proof of the ongoing links between the movement and the union. Terjman accused Ennahda of dishonesty. He said, “Ennahda would have been better off declaring its ties to the IUMS and its intention to reconsider them due to the union’s latest terrorist blacklisting.”

During an interview on al-Hiwar al-Tunsi in April 2014, Ghannouchi said there are no links between his movement and the Muslim Brotherhood, denying the claims about his candidacy to succeed Qaradawi as head of the IUMS.

Political analyst Salah al-Din al-Jourashi told Al-Monitor that since its 10th conference, Ennahda has made strides toward separating preaching and politics. He praised the movement’s commitment to its promises to distance its prominent leaders from religious activity.

Jourashi considers the accusations of Ennahda’s political opponents, who claim the movement's political discourse has been duplicitous, ungrounded. He added, “We cannot deny that Ennahda was part of the international organization of the Muslim Brotherhood, but the party stopped attending the Brotherhood’s meetings and announced its split from them.”

Sahbi Ben Fraj, a leader in the opposition party Machrou Tounes, which was behind the formation of a parliamentary bloc opposing the Nidaa Tunis and Ennahda coalition, told Al-Monitor, “Ennahda is facing major crises locally and regionally related to being acknowledged as a civil party without links to political Islam, rather than just a branch of the Muslim Brotherhood in the world.”

He noted that Ghannouchi is in complete denial regarding his affiliation with the Brotherhood. Fraj said, “We call on Ennahda to split from the IUMS. During its six years of rule, it did not revisit its relations with foreign organizations and regional alliances that oppose Tunisia's state policies.”