The US president’s first national security strategy outlines the White House’s growing campaign to turn the screws on Iran. 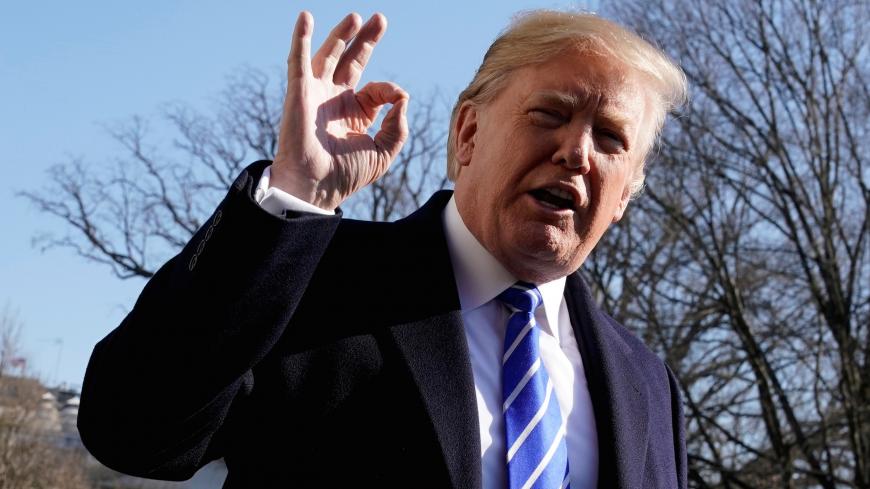 US President Donald Trump gestures as he talks to the media on South Lawn of the White House in Washington, US, Dec. 16, 2017. - REUTERS/Yuri Gripas

US President Donald Trump’s inaugural national security strategy frames Iran as a “rogue state” and primary competitor to US interests in the Middle East.

Released on Monday, the 55-page document draws from Trump’s foreign policy speeches throughout his first year in office. It notably accuses China and Russia of seeking to shape a world “antithetical to US values and interests” by displacing the United States from Asia and weakening Western institutions such as NATO and the European Union.

The periodic document, which can sometimes serve as a predictor for White House foreign policy, also calls for the United States to foster development to make sure the Middle East is “not a safe haven or breeding ground for jihadist terrorists, not dominated by any power hostile to the United States, and that contributes to a stable global energy market.”

Speaking at the Ronald Reagan International Trade Building just blocks from the White House on Monday, President Trump outlined the strategy as a break with Obama-era foreign policy that emphasized democracy promotion in the Middle East.

“Our leaders engaged in nation building abroad but failed to build up and replenish our nation at home,” Trump said, blaming his predecessor for a “disastrous, weak, and incomprehensibly bad deal with Iran and allowed terrorists such as ISIS to gain control of vast parts of territory all across the Middle East.”

Administration officials say they are already taking steps to deal with the region’s challenges, including economic stagnation, the experience of state collapse during the rise of the Islamic State and Iranian expansion.

“It’s a strategy that is already operationalized. These are principles that have been put into effect over the last year,” a senior administration official said on Sunday. “We reaffirm the president’s Iran strategy, we don’t get into specifics, but we do understand that Iran is a malign actor in the region.”

The document puts an emphasis on growing America’s trade relationships, without going into great detail regarding future US policy in the region. It does, however, cite a desire to work through the Gulf Cooperation Council, the regional bloc that has suffered setbacks with a Saudi-led blockade of Qatar since June.

The White House initially sought for Muslim partners to take the lead on countering Islamic extremism after the military defeat of IS. When Trump visited Riyadh in May, he opened a new Global Center for Combating Extremist Ideology and pledged $110 billion in arms sales to Saudi Arabia.

It is not clear, however, how much the regional bloc will focus on the fight against extremism absent significant US cajoling. Only Kuwait and Qatar attended a GCC-wide summit earlier this month aimed at ending the monthslong regional squabble, which has also prompted Congress to hold up arms sales.

The Trump strategy comes as the White House is trying to deter Iran, dubbed “the world’s most significant state sponsor of terrorism” in the document, from strengthening ties with Shiite groups such as Iraq’s Popular Mobilization Units, Lebanon’s Hezbollah and the Houthi rebels in Yemen. Last week, US Ambassador to the UN Nikki Haley held a press conference in Washington with purported fragments of Iranian missiles that the Houthis fired into Saudi Arabia.

“Our new strategy was prompted by the undeniable fact that the Iranian regime’s behavior is growing worse,” she said.

Monday’s strategy could provide a preview of how the Trump administration’s pressure campaign will develop over the next year. It cited Iran’s efforts to beef up its influence through proxy groups, weapons proliferation and a recommitment to its ballistic missile program, activities that have “continued unabated since the 2015 nuclear deal.”

Another official said the national security strategy, the first since the Barack Obama administration’s effort in February 2015, said that Trump’s first cut of the document reflects a “principled realism that takes a clear-eyed view of the threats we face.”

Some past national security documents have had a significant impact on US foreign policy. President George W. Bush’s 2002 version emphasized the doctrine of pre-emptive strikes against aspiring developers of weapons of mass destruction, which laid the political groundwork for the US invasion of Iraq the following year.

Trump’s vision does not appear to include similar insights, with no mention of pre-emption or how the United States might prepare for a two-front war, despite offering stern words for Iran and North Korea. Some of those challenges may be mentioned in upcoming US strategy documents, such as the Pentagon’s national military strategy, due out in January, and the Missile Defense Review, also slated for an early 2018 release.

“The scourge of the world today is a small group of rogue regimes that violate all principles of free and civilized states,” the document reads. “The longer we ignore threats from countries determined to proliferate and develop weapons of mass destruction, the worse such threats become, and the fewer defensive options we have.”