While some opposition factions hope Russia's reported military withdrawal from Syria will encourage a political solution, others fear Iran and regime forces will exploit the vacuum. 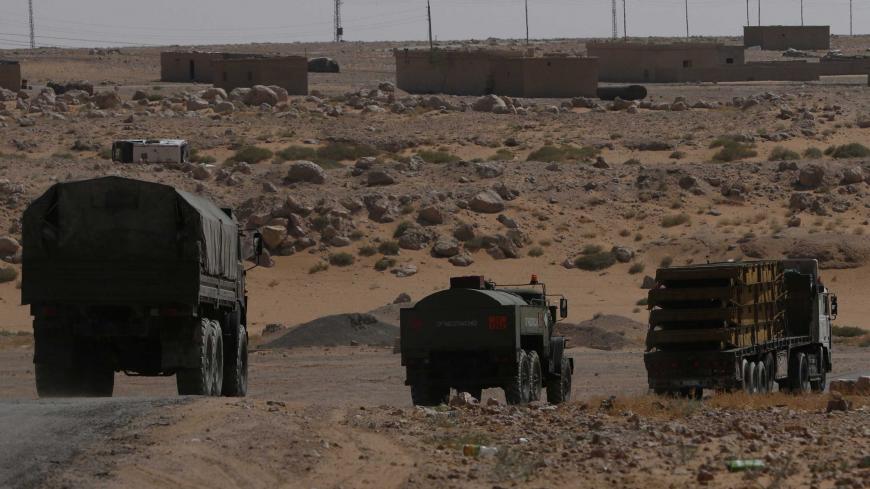 Russia's Dec. 11 announcement of its intention to reduce the number of its military forces operating in Syria was the second such declaration since the Russian intervention started on Sept. 30, 2015. The first time Moscow announced a partial pullout was on March 15, 2016, about six months after the start of the Russian campaign in Syria.

However, the intensity of subsequent Russian airstrikes against areas controlled by the Syrian opposition, as well as the regime's subsequent gains on the ground, raised doubts among opposition ranks and the international community about the seriousness of the first withdrawal.

Russian President Vladimir Putin ordered Dec. 11 the start of a partial pullout of Russian troops after holding talks with his Syrian counterpart, Bashar al-Assad, during his visit to the Hmeimim military base in Latakia on Syria's Mediterranean coast.

The Russian withdrawal announcement was again met with skepticism by the United States, which has military bases and soldiers on Syrian soil. Pentagon spokesman Maj. Adrian Rankine-Galloway said on Dec. 11 that Russian comments about the withdrawal of troops from Syria do not necessarily mean the actual reduction of troops.

The alleged reason behind Russia's partial pullout is the defeat of the Islamic State (IS) and the liberation of IS' strongholds, which was the main task behind Russia's intervention in Syria, according to Russian military and political sources.

The withdrawal declaration comes after Sergei Rudzkoy, head of the Russian General Staff's Main Operations Department, announced in a press conference Dec. 7 that Russian jets had carried out more than 100 sorties in the final phase of the operation and launched at least 250 airstrikes against IS members and sites.

The Russian reduction in troops could serve as an opportunity for Iran, a long-time ally and supporter of the Syrian president. Iran is likely to continue supporting cross-border militias and other forces, to strengthen its military presence and fill the vacuum on the ground left by the withdrawal of Russian troops, especially in the main cantons controlled by opposition forces, such as eastern Aleppo, parts of Homs and others areas.

Iran's intervention alongside the regime's forces could further deteriorate the situation on the ground amid international divisions and the end of the eight round of the Geneva talks between the Syrian regime and the opposition, which concluded without any breakthroughs. This factor comes as UN Special Envoy for Syria Staffan de Mistura blamed the Syrian regime delegation for the failure of the talks.

The deadlock may encourage the regime's Iran-backed forces to carry out military action against opposition forces, thereby threatening the de-escalation agreement reached in May between Russia, Iran and Turkey. It would also jeopardize the political process in Geneva and destroy any chances of a political solution. With Russian air cover, Syrian forces and their allies are still trying to advance in eastern Ghouta on the outskirts of Damascus — a de-escalation zone — while also heading towards Idlib and its southeastern administrative border for the first time in three years.

Iranian support for the Syrian regime is enabling it to press for more territorial gains. Observers fear Tehran's backing would disincentivize the regime's desire to negotiate with the opposition and reach a political solution. "Iran continues to incite the regime to breach the agreements in order to undermine the negotiations," Ahmed Ramadan, member of the political body of the Syrian National Coalition for Revolutionary and Opposition Forces, told Al-Monitor. "The Geneva negotiations and the political process cannot remain manipulated by the regime and Iran."

The Syrian opposition seems divided in its analysis of Russia's partial pullout and its reflection on the political solution and negotiations. It does not have a unified answer to the possibility that Iran and its militias could exploit the Russian effort in their favor because they seek to strengthen their influence and presence in Syria.

Iran had noted that its forces will remain in Syria even after the defeat of IS and that it will continue to cooperate with the government in Damascus. On Nov. 8, Ali Akbar Velayati, a senior international affairs adviser to Iran's Supreme Leader Ayatollah Ali Khamenei, had announced that Syrian forces would begin operations after ousting IS from eastern Syria to recapture Idlib in the northwest of the country, asserting Iranian support in the reconstruction phase.

Ramadan does not believe that the Russian partial pullout will have any significant impact at the political level, nor will it really affect the levels of Russian control and intervention on the ground. “Russia is strengthening its influence on the political, security and field levels, and this shows the control it has on the Syrian regime," he said.

He explained to Al-Monitor that, at this stage, the only way the Russians will have influence on the political settlement process is “if Moscow decides to fully support the Geneva negotiations and the political transition and to implement its obligations in the Astana Agreement, where [Russia] presented itself as guarantors of the regime but failed to fulfill its obligations to stop escalation, namely: implementing a cease-fire, lifting the siege on blockaded cities, releasing detainees and revealing the fate of abductees and missing persons."

Supposedly, the partial pullout of Russian forces from Syria would be in accordance with the requirements of the current stage of the conflict and in line with the launch of a genuine negotiation process in Geneva under the auspices of the UN and thereafter paving the way for peace talks.

Meanwhile, in the Syria's north, the United States is keeping a number of its troops and training about 2,000 soldiers, and Iran is still supporting forces fighting on the ground and taking advantage of any opportunity to expand, gain influence and control territory. The Iranians are even building military bases near Damascus.

All this happens amid optimism prevailing among some opposition circles about the seriousness of Russian efforts to find a real political solution in line with relevant UN Security Council resolutions.

In this vein, Muhannad Delikan, a member of Moscow's platform of the Syrian opposition delegation, told Al-Monitor that the "Russian statements about reducing the number of troops operating in Syria generally usher a very close political solution. The Russians are pressing for a political solution that must be implemented immediately."

Commenting on whether Iran would take advantage of the Russian pullout from Syrian territory, he asserted that "the political solution is the only thing that will fill the vacuum left by the Russians in Syria."

He does not believe that the breaches of the de-escalation will continue, because "the general inclination is to suppress those attempting to escalate the situation. At this juncture, escalation attempts would undermine the political solution. But the regional and internal inclinations are all in the direction of serious and ongoing negotiations and this would block and freeze any escalation."