Syrian Kurds press on with elections despite divisions

Kurds supporting self-rule in Syria have two elections down and one to go in their march toward a federalist government, although not everyone in the territory is on board. 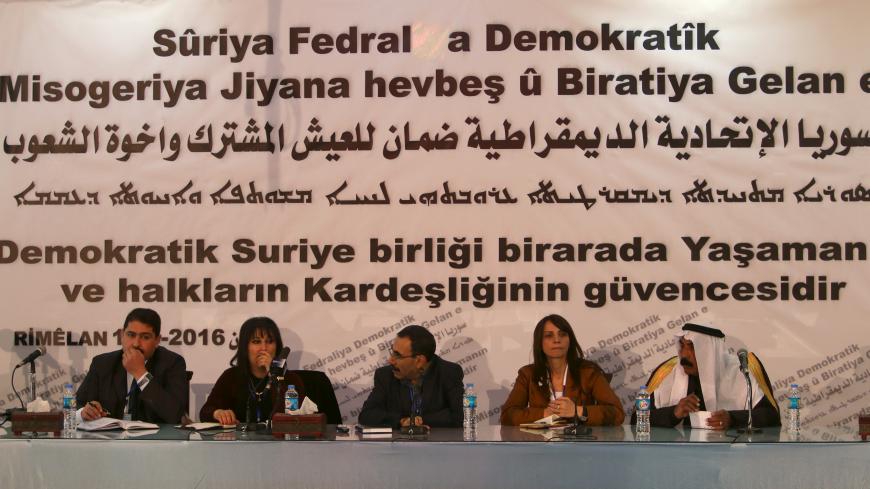 Bureau members of a preparatory conference to announce a federal system discuss a "Democratic Federal System for Rojava - Northern Syria" in the Kurdish-controlled town of Rmeilan, Syria, March 16, 2016. - REUTERS/Rodi Said

Kurds in northern Syria are proceeding with elections as they aim for a federal system of government in Syria, despite the Syrian regime’s disapproval and Turkey’s anger. The third and last phase of voting in the election will take place in January, when voters choose members of the Democratic People's Council of North Syria.

The first phase of the voting launched Sept. 22, with elections in 3,700 communes — smaller provincial units in residential neighborhoods within the Democratic Federation of Northern Syria, also called Rojava. More than 12,000 candidates participated.

On Dec. 5, the High Electoral Commission announced during a press conference in Amouda that turnout for the second phase of local council elections reached 69%. Seven electoral lists, as well as thousands of candidates, took part in those Dec. 1 elections in three areas: Hasakah (Jazeera province) in the northeast; the Euphrates (Tell Abyad and Kobani); and Afrin, which also includes parts of eastern Aleppo province, known as al-Shahba. The elections included 21 parties representing Kurds, Arabs, Christians and Assyrians from Rojava.

The three-stage elections are designed to shore up support for federalism, a system in which power is shared between the national government and smaller regions such as states or provinces. Russia has suggested that it approves of this type of government for Syria and that federalism might appease enough of the opposition to allow Syria to remain united and for President Bashar al-Assad to remain in office.

Not all Kurds are part of the federalism movement, and elections were not held in Raqqa, Manbij and Tabqa, which haven't joined the Democratic Federation of Northern Syria, at least not yet.

The Kurdish National Council, which includes a number of Kurdish parties opposing democratic self-governing, is boycotting the overall electoral process. The council regards the participation of the Democratic Union Party (PYD) in the elections as unilateral and called upon its masses in an official statement to boycott all elections.

Mustafa Mashayekh, the undersecretary of the Kurdish Democratic Unity Party in Syria (Yekiti), told Al-Monitor that his party does not belong to the democratic self-governing Democratic Federation of Northern Syria, which runs the area and is affiliated with the PYD. However, he believes his party’s participation in the elections stems from its belief that it is part of Rojava (which preceded the federation) and that it's necessary to have a political plurality that's open to opposing opinions.

“The federal project is able to reunite Syrians without exclusions and is able to be one of the pillars of combating persecution, tyranny and terrorism," he said.

The Yekiti participated in the elections as part of the list of the Kurdish National Alliance in Syria (Hevbendi). The Hevbendi list won 40 seats in Jazeera, 40 seats in the Euphrates area and 72 seats in Afrin.

Fawza Youssef, co-chair of the executive body of the Syrian Democratic Council — an umbrella group that includes Arab, Kurdish and Christian parties — is participating because her group seeks to form an administration that promotes the rights of all constituents in north Syria.

“There will be a fair representation of everyone. We work for the sake of all constituents," she told Al-Monitor. “The [Kurdish] region today has become wide, which is why it is important to form a body that unifies these territories and achieves administrative, economic, cultural and security integration among them."

Mohamed al-Hassan, a young Arab from Afrin and a member of the Hevbendi list, noted that Arab constituents occupy decision-making posts in the movement toward federalism. “Arabs participating in elections aim at making the democratic project in north Syria successful,” he told Al-Monitor. “We are the sons of this district and we have to be part of building our will and society as well as defend our gains and rights."

Yet other Arab groups oppose Kurdish self-government, reject the electoral process and accuse the PYD of seeking to “divide Syria,” according to Fawwaz al-Mufflih, a member of the political bureau of the Syrian Revolutionary and Opposition Forces in Hasakah.

Mufflih told Al-Monitor that the majority of the Arab constituents are against the current elections, which he describes as a “farce” that “will vanish after the regime falls.” Mufflih also accuses the Kurdish authority in northern Syria of “compromising the unity of Syria.”

Opponents of the federal project tend to believe that foreign states will disappoint the Kurds and undermine their dream, Mufflih said: “The United States will not support Kurdish forces when Turkey advances toward lands controlled by Kurds.”

Turkey seeks to undermine the Kurdish project in northern Syria because the People's Protection Units follow the Kurdistan Workers' Party (PKK), which Ankara labels a terrorist organization. Turkey has recently fostered relations with Russia and Iran and has broken the deadlock it had with the Syrian regime, as almost no Turkish statement is made without attacking Kurds in north Syria or talking about Turkey advancing militarily toward Afrin. Turkish politician Zahid Gul told Al-Monitor, “For the Turkish government, north Syria is governed by the PKK.”

“International and regional powers, namely Turkey, are pumping mass campaigns to defame the federal project," he told Al-Monitor. Dibo added that the alliance of Russia, Turkey and Iran will not last long. “Turkey may get involved in attacking Rojava territories, but it will be the beginning of Turkey’s ticket out of all the territories it occupied in north Syria.”