Rival governments in northern Syria are at it again

Two rival local governments affiliated with the opposition in Idlib province are vying for influence and power, which could further escalate tensions between them. 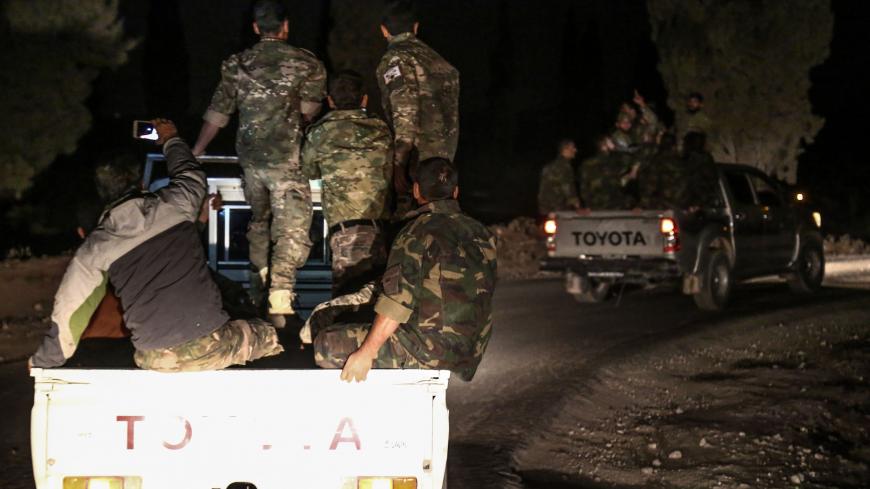 ALEPPO, Syria — The northern province of Idlib, controlled by the armed opposition, witnessed the first clash between two local opposition governments. Disputes began in early December between the Syrian Relief Government, which was formed Nov. 2 at al-Hawa border crossing, and the Syrian Interim Government of the Coalition for Syrian Revolutionary and Opposition Forces, established in March 2013.

A member of the executive office of the political committee in Idlib province, Mohammed Shakib al-Khalid, told Al-Monitor that the committee intervened to resolve the dispute between the Syrian Relief Government and the Interim Government, both of which are affiliated with the Syrian opposition.

Khalid explained that the political committee in Idlib was formed on Nov. 24, 2016. It is considered a political front for revolutionaries in Idlib and is composed of revolutionary popular figures and activists working in various sectors in Idlib, while attempting to spare the province a clash between the two opposition governments.

Despite the intervention of Idlib’s political committee and the efforts it employed in order to suspend this warning, tension still prevails over the relationship between the two opposition-affiliated governments, located in Idlib and surrounding opposition-controlled areas.

“We expect escalation between the two governments because they cannot exist in one geographical area. The conflict between them will soon intensify until one of them is eliminated,” Mahmoud Rahal, a lawyer and activist, told Al-Monitor.

Statements made by the director of public relations and communication in the Interim Government, Yasser al-Hajji, during an interview with Shaam Network on Dec. 4 caused the dispute with the Relief Government to escalate. He stressed the Interim Government’s refusal to cooperate or deal with any government connected in any way possible to terrorism, whether through persons or groups.

On the same day, Dec. 12, the Relief Government issued a sharp statement against the Interim Government and gave it a 72-hour deadline to leave Idlib and neighboring areas in the western and southern countryside of Aleppo and to withdraw all of its personnel. The statement, signed by Sheikh, read, “To the Syrian Interim Government, we warn you to close all your offices in the liberated areas within 72 hours of the date of notification.”

The Relief Government is facing a lot of criticism and many questioned its independence from Hayat Tahrir al-Sham since it was the one that called on July 23 for a meeting between political figures in northern Syria areas that are not under regime control. This is how the Syrian General Conference was born, resulting in the Relief Government being formed.

“Both governments need to merge, otherwise the dispute would never come to an end, which will affect the revolution’s interests in the liberated areas of Idlib and the surrounding areas. This is a popular demand,” Rahal said.