The Palestinian mission in Washington abandoned attempts to court the White House and Congress with the mission's first-ever Christmas party on Capitol Hill after it was announced that President Donald Trump would make a major statement on the status of Jerusalem on Wednesday. 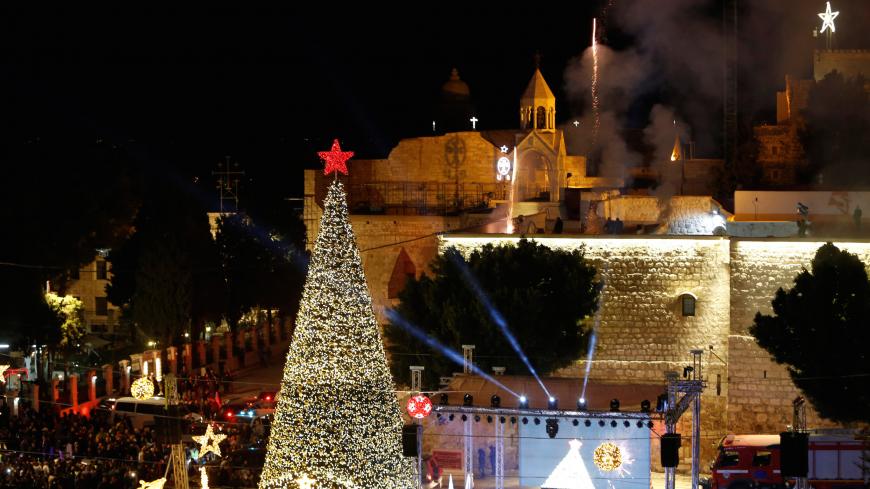 Fireworks explode during a Christmas tree lighting ceremony outside the Church of the Nativity in the West Bank town of Bethlehem, Dec. 3, 2016. - REUTERS/Mussa Qawasma

WASHINGTON — President Donald Trump's foray into the touchy politics surrounding the status of Jerusalem claimed its first casualty Tuesday night when the Palestinian mission abruptly canceled what was supposed to be its first-ever Christmas party on Capitol Hill.

Trump is expected to recognize the holy city as Israel’s capital Wednesday while delaying relocation of the US Embassy from Tel Aviv for another six months, as presidents have done since Congress first required the move in 1995.

The Christmas celebration was to have taken place Wednesday night; White House officials had earlier confirmed that they planned to attend. The party was to have been hosted by the PLO delegation to Washington, which the State Department threatened to shut down last month before backtracking.

The celebration “was planned to bring a live-stream video of Christian leaders and the children of Bethlehem with a Christmas message of peace,” Shirin Yaseen, the spokeswoman for the PLO delegation in Washington, said in a statement. “Out of care for our leaders and children, it might be unsuitable for them to speak and sing shortly after the possibility of an announcement that runs counter to the message of peace.”

The canceled event, dubbed “A Bethlehem Christmas on the Hill,” was an unconcealed effort to highlight the birthplace of Jesus to garner greater sympathy for the Palestinian cause among American Christians. It was to take place just one day after the House of Representatives unanimously passed legislation slashing US aid to the West Bank and the Gaza Strip until the Palestinians cease paying stipends to convicted terrorists and their families.

“Our motto is that Jesus is a gift from Palestine, and Bethlehem is our gift and it’s the city of peace,” said Husam Zomlot, the PLO’s envoy to Washington. “It’s the best way to really tell the story of Palestine and the Palestinians.”

Zomlot made the comments last month at a meeting with the mayor of Bethlehem and pro-Palestinians activists to discuss bolstering their lobbying and public relations strategies. That same week, the PLO began organizing and sending out invitations for the Christmas party, which is also expected to be attended by members of Congress from both parties.

Shortly before the meeting, the PLO dispatched two West Bank mayors to meet with lawmakers and their staff. Anton Salman, the Christian mayor of Bethlehem, and Mayor Ahmad Sokar of Wadi Foukin sought to highlight the hazards that Israeli settlements pose to West Bank Palestinians. However, by the mayors’ own account, the meetings did not yield the desired results.

“For several discussions, I don’t feel that the people we spoke to … were too much interested,” Salman told the pro-Palestinian activists and human rights groups. “Maybe they have us as a public relations issue … but we’re not in a position where we can force any serious talks concerning the Palestinian problem.”

In addition to meeting with the staff of Sen. Bernie Sanders, I-Vt., and Sen. Angus King, I-Maine, Salman and Sokar met with several Democrats and staff in the House Progressive Caucus. They also met with Rep. Jeff Fortenberry, R-Neb., and staffers for Rep. Darin LaHood, R-Ill., as well as Rep. Betty McCollum, D-Minn., who recently introduced a bill to prohibit Israel from using US military assistance to detain and interrogate Palestinian children.

“They spoke about children, human rights [but] not as a way that they convinced us that they are interested in the Palestinian issue, solving Palestinian suffering, ending the difficulties that the Palestinians are facing,” Salman said. “There must be a new way how you can lobby this country and how you can be effective to make the changes in the mentality of the Congress.”

A spokesman for McCollum said she had an “important discussion about the challenges the mayors face running municipalities under Israeli occupation and the difficulties this presents for the people they serve. Both mayors expressed their strong support for [her] legislation promoting human rights for Palestinian children.”

Palestinian efforts to sway Washington to their cause have historically paled in comparison with the millions spent by well-funded pro-Israel lobby groups bolstered by evangelical groups such as Christians United for Israel. However, recent polling suggests the Palestinians may find a more receptive audience among young evangelicals: A December poll by Life Way Research, an evangelical polling firm, found decreasing support for Israel among evangelical millennials.

Zomlot and Salman believe that drawing attention to the extensive settlement activity around Bethlehem could translate to heightened American awareness of West Bank settlements in general.

According to Salman, he only has jurisdiction of approximately 7% of Bethlehem while Israel controls the other 93%, with 23 Israeli settlements surrounding the city. Israel has also constructed a wall impeding Palestinian access between Bethlehem and Jerusalem.

Zomlot said Bethlehem now numbers 220,000 Palestinians and 167,000 Israeli settlers. “That means that in the next 10 years the number [of settlers] will be more than ours,” he said.

Despite the Palestinians’ new efforts to emphasize the West Bank’s rich Christian history, Washington has dealt the Palestinian Authority (PA) several setbacks within the past month alone. Just today, PA President Mahmoud Abbas’ office issued a strong condemnation after Trump reportedly told Abbas in a phone call that he intends to move the embassy to Jerusalem.

“President Abbas reiterated that such a move will have detrimental consequences on the peace process and the prospects for the internationally endorsed two-state solution,” Abbas’ office said in a readout of the call. “Furthermore, President Abbas warned of the grave consequences on the stability and security of the region and the world at large.”

Israel recognizes the entirety of Jerusalem as its capital. Palestinians, however, want to keep Israeli-occupied East Jerusalem as part of their future state.

Updated Dec 5, 2017: This article was updated after the Palestinian mission canceled the Christmas party.