The unity between Christians from abroad and fellow Christians in Palestine gives Palestinians hope they can stay put on their land. 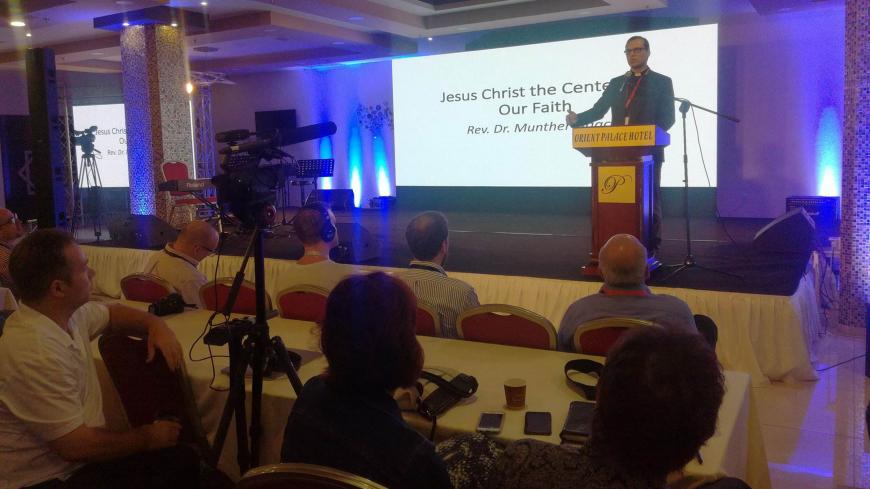 Rev. Munther Isaac speaks at the Christ at the Checkpoint conference in Bethlehem, West Bank, May 29, 2018. - Facebook/christatthecheckpoint

For the first time since US President Donald Trump was elected with the large support of the Christian right in the United States, Palestinian Christians met to counter the ideology that helped him win the election.

For the fifth time since 2010, Palestinian Christians successfully organized a five-day international conference that attempted to theologically confront Christian fundamentalism or what is often referred to as Christian Zionism.

Two weeks after two Christian Zionist evangelical pastors gave their blessing May 14 to the moving of the US Embassy from Tel Aviv to Jerusalem, more than 400 Christian leaders and theologians met to discuss and counter the theology that justified Israel’s occupation as part of a divine plan by God.

The conference, titled “Christ at the Checkpoint - Jesus Christ at the Center,” is organized every two years by the Bethlehem Bible College. This year’s four-day conference that began May 28 in Bethlehem was attended by over 400 persons, including some 210 who have come from around the world. Among those attending is the head of the World Evangelical Alliance, Bishop Efraim Tendero, who told attendees that he was pressured not to come. He didn’t detail who pressured him.

Attendees also are given tours and meet with Palestinians from all walks of life. Conference attendees were invited every morning to witness the massive flow of people at the Bethlehem checkpoint, while organized tours were held at various Palestinian locations. A visit to Bani Saleh included meetings with relatives of Ahed Tamimi, the Palestinian teenager serving an eight-month prison term for slapping an Israeli soldier.

Palestinian President Mahmoud Abbas, who planned to speak at the conference but was unable to because it was the first day he was discharged from hospital, sent his foreign minister, Riyad al-Malki, to outline the Palestinian position. Other speakers included the Palestinian envoy to Washington, Husam Zomlot, who was recalled May 16 after the US Embassy was moved to Jerusalem. Faten Hodali of the PLO gave presentations on the effects of the wall and settlements restricting Palestinian life in the occupied West Bank.

Malki called on the foreign participants attending the conference in Bethlehem to “invest in peace, not in weapons, unless Israel commits to respect international law, including the Palestinians’ right to life.” He asked Christian evangelicals how “we can work together to produce love and peace.” Malki called Jesus “a revolutionary and ultimate champion of human rights and dignity.”

In a private meeting with key international leaders, Zomlot explained that Palestinians live in and own property in Jerusalem and they are not going anywhere. “What has changed is not the status of Jerusalem. What changed is the status of the United States, which has disqualified itself from the peace process because of a largely ideological act.”

Speaking to Al-Monitor, Rev. Alex Awad, a former dean of the Bethlehem Bible College, which has been organizing the conference since 2010, said that he and others had noticed “the influence and the potential dangers of Christian Zionism” back in 1979 when the Bethlehem-based college was established.

“The Palestinian administration and faculty of the college also realized that the theological perspectives of Christian Zionism need to be challenged. We began to conduct seminars and lectures at the college to give a Biblical alternative to Christian Zionism,” he explained.

Awad, who is now a retired pastor living in Oregon in the United States, said, “The purpose of the conference, Christ at the Checkpoint, was and still is to have Christian leaders and theologians come to Bethlehem from all around the world, look at the segregation wall, the settlements, the checkpoints, the refugee camps and all the other injustices that Palestinians face daily; then look at the Bible and seek a fresh inspiration as they examine the teachings of Christ on themes such as peace, justice and God’s love to all races.”

Munther Isaac, director of the conference, told Arab News May 27 that despite the loud voices of Christian Zionists, in fact their ideological support has been fading for some time. “Although we are witnessing a re-emergence of the Christian Zionist camp, we are confident that this is an artificial rise that has no basis among young people, among academics, among theologians or Christians and the evangelical Christian elite,” said Isaac, pastor of the Christmas Lutheran Church in Bethlehem.

He said organizers of the conference this year “are going back to the roots and theology in an attempt to challenge Christian Zionist theology and in a way that makes it clear that it doesn’t reflect Christian values.”

He argued that the rise of Trump is not the cause of the problem but its symptom. “It has made it more urgent that Christian leaders must say that Jesus taught us to love our neighbors and Jesus rejects bigotry and prejudice.”

Awad said that the challenge for Palestinian Christians to confront this ideology is hard. “Our challenge is to find hope in Palestine for those who feel that it is difficult to accept being a Palestinian and Christian. We believe that our vision will give our people hope.”

The keynote final speaker of the conference put the issues facing Christian leaders and theologians dealing with the Middle East conflict in perspective. “There are Christians that are glorifying Israel more than the God of Israel. But Christ comes first. He takes precedence over our national identity,” Bishop Tendero told the attendees.

“When we follow Jesus in peace and reconciliation, we are called sons and daughters of God. We are reflecting the character and nature of our God. The God of peace,” he added.

The unity between Christians from abroad with fellow Christians in Palestine provides an important feature in giving people hope and ensuring that they stay put on their land despite the hurt and the opportunities to emigrate. Confronting merchants of hate who use the Bible to justify land grab and occupation has been met with love and determination by Palestinian theologians. The question is how far will the ideas and discussions in Bethlehem resonate around the world and especially around the intended Christian fundamentalists in the United States?