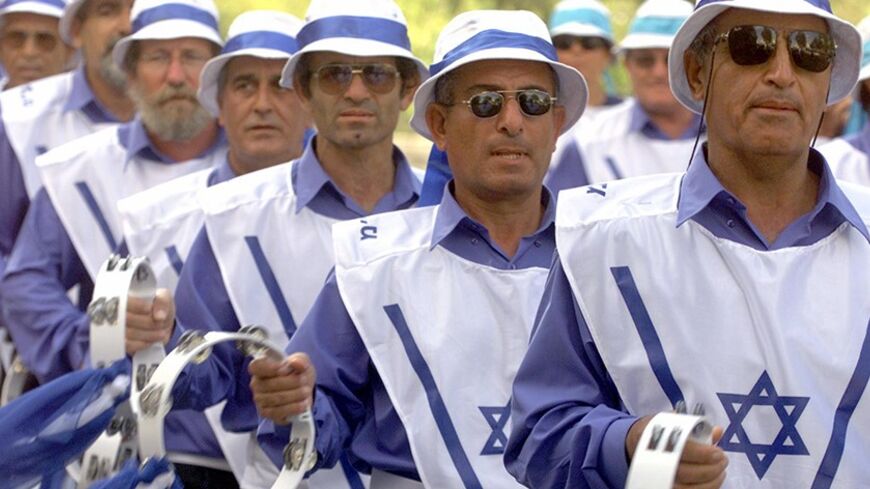 Men wearing shirts with the Star of David march during a parade of international Christian Zionist groups in Jerusalem, Sept. 24, 2002. - REUTERS/Reinhard Krause

Christian Zionism, which cites the Bible to support Israel’s occupation of Palestinian lands, received heavy criticism at a conference organized by Palestinian Christians in Bethlehem the week of March 10 and attended by Al-Monitor.

Theologians from Europe and North America as well as Palestinian speakers presented lectures full of biblical references at the third Christ at the Checkpoint conference questioning the validity of what is referred to as dispensational doctrine.

Rev. Alex Awad, pastor of the East Jerusalem Baptist Church, explained how Christian Zionism has led many Christians to blindly support Israel. Awad then went even further, describing the wariness of many evangelicals toward calls for peace. "Some Christians are suspicious of peace because they've heard sermons that delegate peace and peacemaking as the work of the Antichrist," Awad said. "But the Bible calls us to be peacemakers," he added.

Awad, who is also dean of students at Bethlehem Bible College, the conference founder and sponsor, explained that many evangelicals think that supporting the actions of the State of Israel, even if they violate human rights and dehumanize Palestinians, is a way to obey and love God. He asserted, "They conflate political backing of a secular state with spiritual blessing upon God's chosen people."

Theologically, the question that needs to be answered is whether a progressive doctrine can be developed that is acceptable to evangelicals. Several speakers pointed to various alternatives that have been put forward in recent years in this regard. Awad complained, however, that many evangelicals attack any deviating theology "as anti-Semitic, supersessionist replacement theology." Replacement theology, developed during Christianity's early years, is seen by many as the theological basis for European Christian attitudes toward Jews that led to the Holocaust.

Burge responded, "No." Instead of replacement theology, he suggested fulfillment theology, a belief that Christ did not replace, but fulfilled the Abrahamic covenant as it was meant to be. "The Gospel announces Jewish blessing from a Jewish messiah that steps beyond provincialism and proclaims redemption of the world," said Burge.

Burge called it a mistake to spiritualize land. "The Holy Land is now our entire globe, not the privilege of an ethnic feud. The Gospel universalizes the local, tribal blessings of Abraham," he said. Juster asserted that the physical Holy Land is also key to God's irrevocable calling and promise for the Jews.

The dialogue brought out the two speakers' theological variances, but their hearts were one, especially on the question of religious exceptionalism. "When I, no matter who I am, see my religious heritage as a basis of privilege, I cannot be a blessing to the nations," Burge said. "When religion is linked to privilege, it is generally linked to sin."

Juster, likewise, called Christian Zionists' unquestioning support of the Israeli state a mistake. "Blessing Jews means praying for them to respect human rights, not chauvinistic blanket support for all Israeli actions," he said. "Loving Jews isn't giving [them] license to do whatever they want. We must fall on our faces and pray, God, turn them to Christ."

According to Burge, American evangelicals are easy prey for US exceptionalism, believing that God has divinely blessed their nation with an assigned destiny and entitlement. "Commitment to the secular state of Israel is part of American exceptionalist evangelicalism. Christians become afraid of disagreement with Israel. That robs the church of its prophetic voice," he said. "But sometimes you must speak critically even of those that you love."

Awad later told Al-Monitor that major changes are taking place in the evangelical community due to the strong and persistent critique of Christian Zionism. “It is near impossible for any serious student of the New Testament today to be able to justify Israeli colonial and occupation practices in the name of God. What is left is some politically motivated pro-Israeli theologians cherry picking verses from Ezekiel or Daniel in the Old Testament to try to defend the un-defendable injustice carried out by the Israelis against Palestinians."

The change among evangelicals is reflected in recent writings that question the sustainability of such a politically charged theology in the face of facts on the ground and outspoken Christian Arab thinkers who are proving to be successful in refuting them. Israel's leading daily, Haaretz, ran a long article referring to the shift among younger American evangelicals who are refusing to accept the doctrines passed on to them by the older generation. The article referred to the Bethlehem conference as a major contributor to the ongoing changes among Western evangelicals.

Concern over the possible loss of a major segment of American supporters has led the Israeli Foreign Ministry to blast the conference and to threaten those attending it.

The actions of Israel's Foreign Ministry may have revealed a previously unforeseen desperation in how Israel perceives its alliance with Christian evangelicals.