Ready or not, Libya to hold elections in spring

Libya is set to hold elections in the spring of 2018, although political and security instability bode ill for the process. 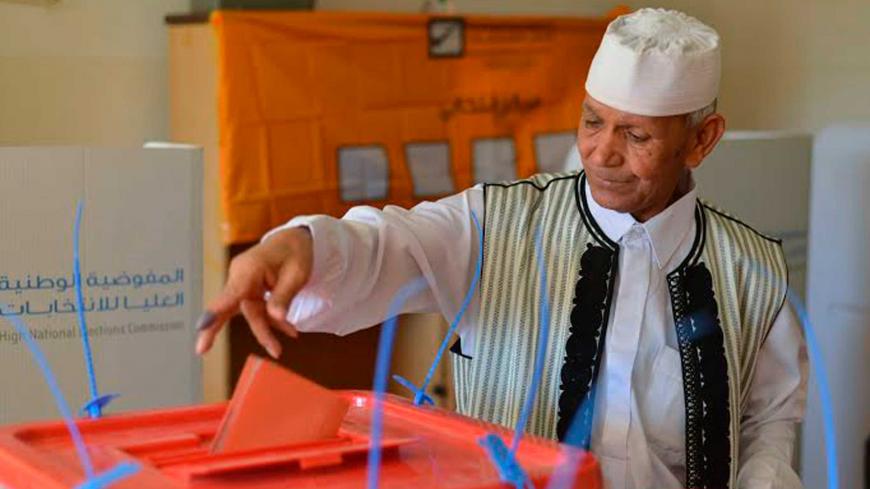 A voter in a traditional costume places his ballot in the box at a polling station inside a school in Sabha, southern Libya, June 25, 2014. - REUTERS/Saddam Alrashdy

According to the Libyan Political Agreement signed in Morocco on Dec. 17, 2015, Libya should have held its referendum on its new constitution as well as legislative and presidential elections by now. By this time, the Government of National Accord (GNA) should have already been replaced by an elected one. The GNA was formed under the leadership of Fayez al-Sarraj specifically to achieve the goals stated in the UN-brokered deal that gave the country an internationally recognized government — but little else.

However, the second anniversary of the agreement has come and gone, and none of these goals were achieved. The GNA is still there after UN envoy Ghassan Salame attempted and failed to get the GNA in Tripoli and its rival government in Tobruk to agree to certain amendments to the agreement's core articles so it would be acceptable to both sides of the political divide. And after three rounds of talks in Tunis in October 2017, political rivals could not agree on the proposed amendments, thus halting the political progress necessary to move the country forward to national elections.

Libyan strongman Gen. Khalifa Hifter declared in a televised speech Dec. 17, “The Libyan armed forces will never be under the leadership of any unelected body, but will always respond to the Libyan people’s orders.” Hifter did not say whether he will run in the upcoming elections, but he was clear that the GNA has failed and it should go.

But the GNA stayed, as the UN Security Council also issued a statement on Dec. 17 reiterating the council’s support for the GNA as the only legitimate government in the divided country.

Salame found himself unable to proceed according to his plan to form a new transitional government for Libya and secure an amended agreement that would make the document part of Libya's interim constitution. This pushed Salame to propose new elections sometime next spring. Libya will continue to have two governments for at least a few more months. The Tripoli-based GNA is unable to do much, prompting doubt as to whether it will be able to run smooth and peaceful elections when the time comes. Its Tobruk-based rival is even more hopeless. Both governments have little to offer to alleviate the daily misery of the people they are supposed to serve, and it is not clear if Hifter is going to accept elections in eastern Libya, which he controls.

Despite the political mess, the lawlessness and the daily difficulties facing its people, the country is now gearing up for its third elections since NATO helped topple its longtime leader, Moammar Gadhafi, who was killed by rebels as he tried to flee his hometown of Sirte on Oct. 20, 2011.

The obvious question is how could elections be fair in a country where there is no central government, where hatred still consumes many and where the rival governments can hardly maintain security in territories supposedly under their control?

Above all that, Libya is still being threatened by different terror activities. The elected mayor of Misrata, Mohamad Eshtewi, was kidnapped and assassinated on Dec. 18 as he left Misrata’s airport returning from an official visit to Turkey. No one has claimed responsibility so far and the investigation is still underway. His death shocked many since it happened in Misrata, which has been one of the few secure cities in war-ravaged Libya.

Logistical challenges remain a serious problem, though the High National Election Commission might still have enough time to prepare. Libya is a very large country with a scattered population, particularly along its long northern coastline. The lawless southern region is even more challenging. It's home to all kinds of illegal activities, including human trafficking, smuggling and kidnapping for ransom. Even if the logistical electoral infrastructure were safely in place, it is difficult to see how the actual elections process would be secured.

Another hurdle for the elections is the election law itself. Under the current law, dual citizens are able to vote, even though dual citizenship is widely forbidden. The 2010 legislation that is still in effect annuls the Libyan citizenship of any Libyan who acquires another citizenship without government approval.

Yet the High National Election Commission has already kick-started the voter registration process.

Salame appears to believe that elections are the quickest and best way to stabilize the country he is supposed to help get back on its own feet. His original plan was based on obvious needs like stabilizing the country and making some progress on the national reconciliation process before any elections could take place. He has apparently changed tack by going straight for elections to speed up the stabilization and reconciliation processes.

Salame could be right, but holding elections under such circumstances is a big gamble.