Israeli government may step back from new national trail

Many oppose an Israeli government proposal to develop a new national trail that would pass through the West Bank and the Golan Heights; the government may now only develop local trails instead. 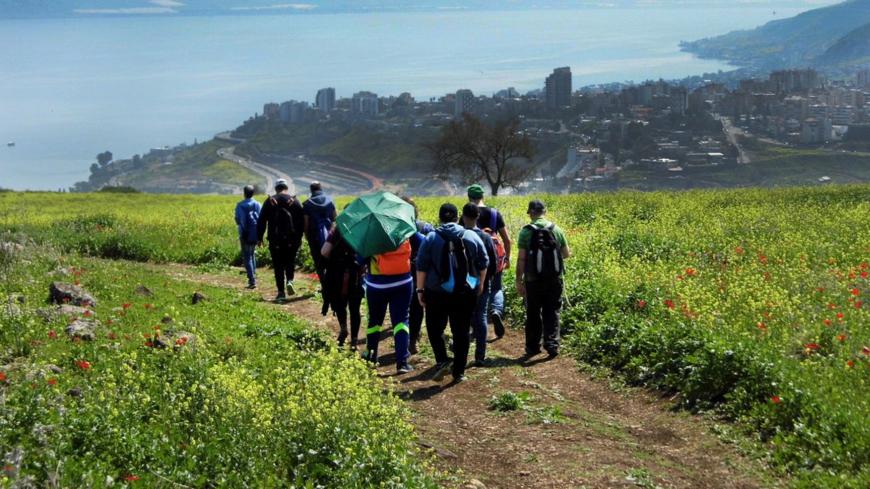 A group of hikers walk through the Israeli countryside. Posted July 3, 2017. - Twitter/@AbrahamHostels

Maybe it was because of the incident outside the village of Kusra on Nov. 30 that left a Palestinian dead after an encounter with Israeli hikers. Maybe it was because of the criticism leveled at the plan to create what was to be called the Eastern Israel National Trail. Whatever the reason, the Ministry of Tourism has apparently backed away from its original idea to create a new hiking trail traversing the West Bank and part of the Golan Heights. A senior official involved in the matter who spoke on the condition of anonymity told Al-Monitor that in lieu of the original plan for a major trail, a revised plan proposes several local trails in parts of the West Bank and other regions, some of which will connect to the Israel National Trail.

The incident in Kusra highlighted claims by opponents of the new major trail about the risks inherent in encounters between Israeli hikers and Palestinian residents of the West Bank. According to settlers, when a group of hikers, most of them children from the nearby settlement of Yitzhar, arrived in the vicinity of the Palestinian village, locals began pelting them with rocks. One of the security guards accompanying the group fired on them with his pistol, killing one of the Palestinians. Two of the adults accompanying the group were injured in the clash, and a gun belonging to one of them was seized by the Palestinians.

A few days earlier, on Nov. 26, the Israeli government had decided to assemble a top-level team composed of general directors of various ministries to formulate plans to create a hiking trail crossing the length and breadth of Israel and the territories and connecting with the Israel National Trail and various bike routes. They were given four months to complete their task. The government budgeted 10 million shekels ($2.8 million) for the initiative.

The team was assembled after Tourism Minister Yariv Levin brought the proposal for the new trail to the government. Levin was explicit in telling Kan News that the intention was always to develop the trail that would pass through the Golan Heights, Jerusalem and the West Bank and the Jordan Valley.

Yaron Rosenthal, director of the Etzion Field School, in the Etzion settlement bloc, is one of the people behind the initiative. He told Al-Monitor that the sites along the route would include historically important antiquities and sites, including Gamla on the Golan Heights, Tel Shilo and Herod's Palace on the West Bank and the Old City of Jerusalem. He says that many Israelis, including people with leftist ideologies, visit sites on the West Bank because of their love of the land and their passion for hiking. Like many other people living in the West Bank who work in tourism, Rosenthal believes that the new route would have transformed the region into a tourism center.

The Israel National Trail, dedicated 22 years ago, was initiated by Avraham Tamir, a journalist who was also a nature and hiking enthusiast. Uri Dvir, as director of the Committee for Trails in Israel, was appointed to make the trail a reality. It is now 1,100 kilometers long, or some 684 miles, stretching from Kibbutz Dan in the north of Israel to the Eilat Field School in the south.

According to the vision statement for the trail, what sets it apart from others is that it passes only through open areas with unrestricted access. It does not pass through heritage sites, national parks, or cities. It is intended as a walking trail, with access for bicycles along most of it, along the length of the state, so that people can become better acquainted with the country's landscapes. In 2012, National Geographic included the trail among one of the best hikes in the world, and Google recently sent its photographers to capture the popular route for Google Earth.

The Society for the Protection of Nature in Israel, which maintains the Israeli National Trail and other trails, told Al-Monitor that hundreds of people hike the national trail every day. Some do the full trail, which takes weeks, while others only hike sections of it. Boys and girls of bar and bat mitzvah age have designated the trail as a challenge, representing their attaining adulthood. Many of them post videos online to share memories of the experience.

Longtime guide Avi Navon has been critical of the government's decision to develop a new trail. "Many young Israelis prefer to hike the entire length of the trail, instead of the traditional trip overseas after the army," he told Al-Monitor. "It is true 'national tourism,' and now they want to destroy it. The Israel National Trail is an international brand, and now the government wants to nationalize it [i.e., use the ideas of the Israel National Trail for political or ideological purposes]. … The nature of the new trail stands in direct contrast to the pure vision of the original Israel National Trail, whose simplicity is its main draw."

Navon also noted the potential security problems that come with hiking in the territories, saying that the only solution would be for the Israel Defense Forces to accompany every individual and group hiking the route that had been planned for the West Bank.

Hagit Ofran of Peace Now told Al-Monitor, "The new Israel National Trail is another kind of settlement." She claims that the initiative is motivated by pure politics. "Its objective," she said, "is to use tourism to normalize the Israeli presence in the West Bank and make it a day-to-day occurrence. Some 10 million shekels will be invested in more and more infrastructures and an Israeli presence, and in so doing, they will be placing more obstacles on the path to a two-state solution."

Rosenthal rejects claims that the trail would have posed a security problem. "There are security problems in many other places in Israel and around the world. It is more dangerous to hike along the cliffs in the desert than to hike in Judea and Samaria," he said, using the biblical names for areas of the West Bank. Levin also dismissed security concerns, telling Kan News, "There are terrorist attacks in Paris and London too, but tourists don't stop visiting there."

The Society for the Protection of Nature in Israel does not oppose the current initiative. It issued a statement in November about the new trail, saying, "Initiatives to invest in the development and promotion of the Israel National Trail are important." The society added, "They will be assessed seriously and professionally, in order to continue with the development of the Israel National Trail and the entire network of hiking trails." Navon said the society is taking this position because of its dependence on the state for its budget, rather than professional considerations.

A Tourism Ministry representative, responding to an Al-Monitor query on the need for a new trail, said, "A committee will be created to discuss the issue and hear from any interested parties, in order to expand the hiking options involving trails and tourist sites by investing in the development of infrastructures on these trails. Some of the investment will also encompass the original Israel National Trail."

The senior figure involved in the initiative said claims that the new plan would have changed the routes of the original Israel National Trail or try to replace it are incorrect. He said the Tourism Ministry "searched for a way to invest in economic infrastructures for tourism in the West Bank, and this proposal was accepted. At the end of the day, most of the money will be spent to develop tourist sites in the West Bank."