You won't believe what these Israeli hikers find on their 1,000 kilometer journey

Israelis and tourists are captivated by the 1,000-kilometer Israel National Trail, which National Geographic selected as one of the world's 20 most highly recommended treks. 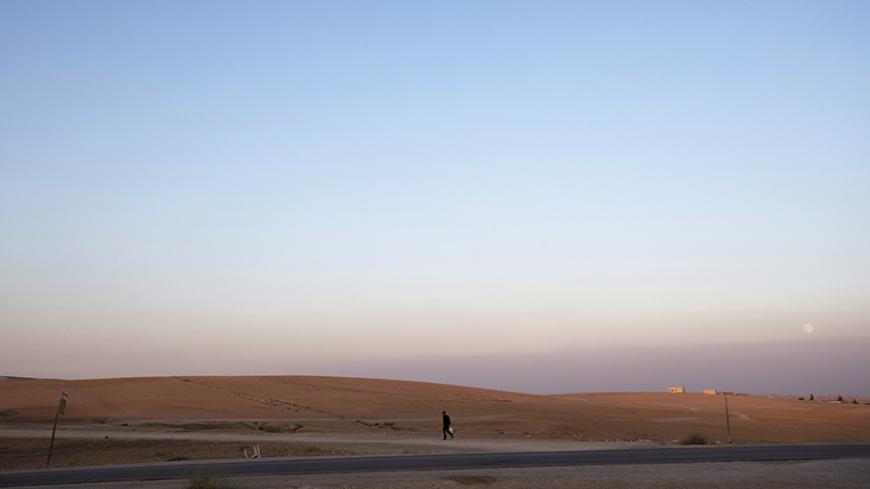 A man walks near the Bedouin village of al-Sira in southern Israel, Aug. 20, 2013. - REUTERS/Ronen Zvulun

One of the oldest Israeli traditions is getting to know the country on foot. It dates back to the days following the establishment of the state, when young people and soldiers would go on long hiking trips across the country. It is, in fact, one of the still-revered sacred cows of Israeli society and one of the few older social values not yet shattered. In light of this, the education system, youth movements and various other frameworks continue to use it to educate youths and many other Israelis practice the tradition.

The country's numerous natural sites abound with marked hiking trails of a wide variety of lengths and levels of difficulty. Towering above them all is the Israel National Trail, which traverses the entire length of the country from Mount Hermon in the north to Eilat on the Red Sea coast. The trail is about 1,000 kilometers [620 miles] long, and it takes on average two months to walk it from beginning to end.

“The hikers embarking on the trip along the trail are, for the most part, young people just released from the army, and they often take the trip in preparation for the traditional [post-military service] big trip abroad,” explained Moti Ben-Shitrit, chairman of the Israel Trails Committee. The committee is responsible for marking trails and for maintaining and updating trail maps in accordance with planning changes on the ground, such as road building or the expansion of a village or a town. Consequently, the length of the trail varies from time to time by up to 100 kilometers (62 miles).

The trail opened 20 years ago, but hiking its entire length only became a popular activity in recent years. “To date, [several] thousand, if not hundreds of thousands have traveled along the trail,” Ben-Shitrit told Al-Monitor. “It did not catch on right away, but [as they say] good food cooks slowly, and in recent years, it has made a name for itself as an attractive brand.” Regardless, even Ben-Shitrit finds it hard to explain the secret of its magic. Be that as it may, he emphatically argues that it is one thing to tour the country and quite another to hike the Israel National Trail.

“The landscape experience is not the same if you don't actually walk through the scenery. There is something in sweating it out that enhances the experience,” said Yael Avidan, 27, who walked the trail from north to south about two years ago. “I spent two years touring abroad after the army, and it was my way of coming back home to Israel. It was not easy returning to the intense life in Israel, and I figured that a return journey on foot would be the best way to do it. On the way, I acquired valuable geographical knowledge that I couldn't have gained otherwise.”

Avidan set off on her own, and when approaching the southern desert, she joined three other lone hikers. “Traveling in the desert all alone is frightening and difficult logistically. Up north, on the other hand, the camping sites are generally located not too far from the local towns and villages, and you are apt to meet other hikers now and then, as I have indeed done.”

One hiker who did it all on his own is Uri Aharonov, 38. Like many other young Israelis who take a sabbatical year after his military service and head off on long voyages to the Far East or to Latin America, Aharonov also traveled abroad for several months after his military service. Once away from Israel, he felt that he should know the country he was born and raised in no less than the Far East he was touring. “The trip changed my life. It redefined me. I walked a thousand kilometers all alone. I feel that I am capable of doing many other things now.”

Other hikers prefer to do the trail in the company of fellow travelers. It is characteristic of Israelis, after three years of pulling through together in the military, to prefer to stay and travel together. Anyway, even those who travel alone can relieve their loneliness and receive help from so-called "trail angels" — volunteers who live along the trail and offer weary hikers their hospitality, such as a homemade meal, a warm bed or a shower. Each gives according to his or her ability and goodwill.

“On occasion, I had the pleasure of enjoying the services offered by the trail angels. In some places, I met amazing angels who picked me up, invited me to stay with them overnight and gave me a ride back in the morning,” Avidan recounted. On the second day of the trip, she experienced her first and only potential breaking point. It occurred when, consulting a guidebook, she left the marked trail and found herself lost on a far longer track. “At the end of that day, I spent the night at an angel's home in the Galilee village of Ramot Naftali. My hostess told me that the second day of the trip is the hardest of all. Knowing that it was behind me kept me going.”

A list of the trail angels can be found on the Internet. In fact, most hikers use cell phones to notify the angels along their trail that they are on the way, having charged their phones courtesy of another angel they met earlier in the trip. According to Ruthie Dvir, who has been a trail angel for six years, there are also hikers who arrive without notice.

“Our home in the Lower Galilee Kfar Tavor village is located right on the trail. When our son finished the trek, he suggested that we serve as trail angels. We were aware of the difficulty involved, but we decided to give it a try. We offer the hikers a large basement with a separate entrance and a large backyard with a pool, and our guests always leave the place sparkling clean. It's really impressive,” she said. Needless to say, the Dvirs do not receive anything material in exchange. Rather, it's a “great satisfaction,” she remarked. Dvir said that most of the hikers are young people just released from military service, but over the years, she has also played host to hard-core trail hikers as well, including from the Czech Republic, India and the United States.

About three years ago, National Geographic acknowledged the magic of the Israel National Trail and listed it among the world's 20 most highly recommended treks. “I believe that it's thanks to the vast diversity of landscapes along the trail,” said Aharonov, evidently nostalgic. “It meanders between the northern mountains, across streams and creeks, along towns and villages and through the desert, and on the way various religious communities and cultures might be encountered.”

There is no need to walk the Israel National Trail in one fell swoop. Its proximity to populated places usually enables hikers to take a break now and then. Those who find it difficult to handle the complex logistics, which require long-term planning — for example, arranging for water and food along the trail quite some time in advance — can join one of the annual treks organized by Walk About Love. These hikers do not have to worry about carrying equipment, water or food, nor do they have to concern themselves with logistics. One can join the trek for a fee, and drop out at any stage along the way. Even showers are conveniently prearranged, with the association's vehicles hauling private facilities from one campsite to another, where water can be heated and a refreshing shower taken.

“The aim is to enable people to experience Israel in a positive way and get connected to nature and residents,” Olga Pasternak told Al-Monitor. Her husband, Re'a, came up with the idea while in Australia during the 2006 Second Lebanon War and looking for a way to deliver positive messages about Israel.

The youngest hiker to have participated in the association's trips is Matan van Kimandah. He first walked parts of the Israel National Trail when he was just three years old. Last March, at the age of 10, he joined a week-long trip in southern Israel, unaccompanied by his parents. A 20-year-old hiker from Germany took him under her wing. “I had more fun without Daddy, because I was completely free,” he told Al-Monitor. He is already planning his next trip on the trail.

The travelers all say that the end of the journey is both exciting and empowering, although emotionally quite taxing. “When you walk the trail, you feel as if you are traveling in another country. Perhaps it's the spirit of the good old Land of Israel, the wandering about the country and the hospitality. This is romantic,” Aharonov said in conclusion. “And the bummer is that at the end, you have to go back to the reality of the real land of Israel."