The Israeli government approved the construction of a new tourist route that would pass through the West Bank to the Syrian Golan Heights, raising fears among Palestinians about Israel’s attempts to maintain a permanent presence in occupied territories. 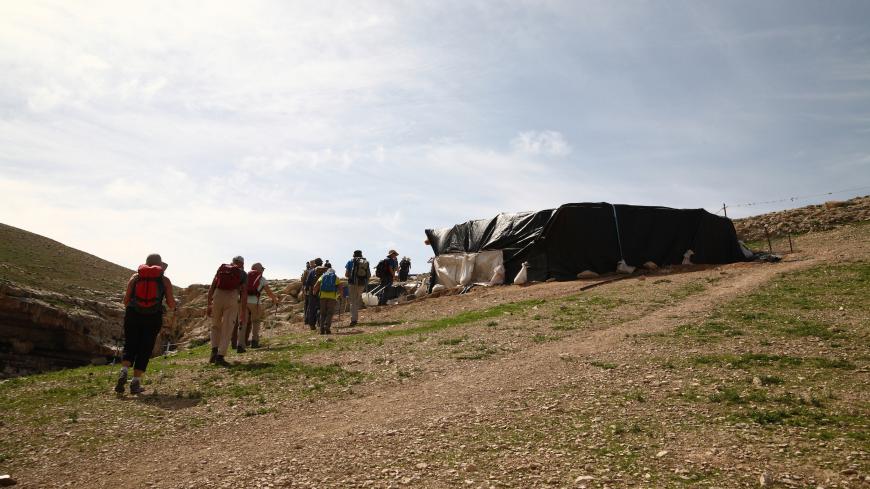 A line of hikers walks toward a plastic-wrapped structure on a hillside, Bedouin nomad settlement in the Judean Desert, West Bank, Israel, Feb. 13, 2016. - GETTY/Dan Porges

GAZA CITY, Gaza Strip — The Israeli government gave funding approval Nov. 26 for a new hiking trail for tourists and Israelis that passes through the West Bank and the Golan Heights, which were occupied by Israel in June 1967. It would be the first Israeli national trail that traverses the Golan Heights, which was seized from Syria, or the West Bank.

The trail was proposed by Israeli Tourism Minister Yariv Levin, who approved the new path and will submit a final plan to the government within 120 days. The project is expected to cost $2.8 million.

The current route, built in 1995, only passes through Israeli land. The Israeli government had previously refrained from having a national trail go into the West Bank for fear of international criticism; Palestinian government officials say the new trail would in essence redraw Israel's borders to include the West Bank.

The director of the domestic tourism department at the Ministry of Tourism and Antiquities, Ahmed al-Nairat, told Al-Monitor that the Israeli government has prepared a list of 23 Jewish cultural sites it would like added to UNESCO's World Heritage list, including sites located in the West Bank.

He said the seriousness of this move lies in Israel's claiming of Palestinian heritage sites as its own, indicating that it falls in line with other Israeli attempts to impose its control and Judaize the West Bank in full. “We have denounced the ratification of the route and we believe it is a violation of all international conventions and treaties,” Nairat said.

Nairat said the ministry will employ all available legal, popular and tourism-related resources to oppose this route. He said the ministry has a plan to consolidate its routes in the West Bank, as it is developing new benchmarks in order to accommodate tourists from all over the world and show them touristic, archaeological and historical sites.

He said the ministry is implementing its plan by launching new routes in zones with great biodiversity and in marginalized areas, and said the tour guides are chosen from among nearby residents who receive training from the Ministry of Tourism. The ministry is also deploying more security guards around Palestinian archaeological sites and is working on these routes in cooperation with student and youth groups, as well as civil society institutions.

“We are trying to support the resilience of the residents, provide jobs for them and include all areas of the West Bank, especially those classified as Area C that fall under the full control of the Israeli government in virtue of the 1993 Oslo Accord and constitute 61% of the total area of the West Bank,” Nairat said.

He added, “Tourism in Palestine is [typically] categorized as religious tourism, since most sites include holy monuments from different religions and are linked to certain holidays. Thus we worked to revitalize the tourist routes during the recent period, which has helped attract increasing numbers of traditional tourist groups coming to Palestine."

Nairat said Palestine ranked first in terms of tourism growth during the first half of this year, according to the UN World Tourism Organization. He also said that registering Palestinian archaeological sites on the World Heritage list helps protect those sites against Judaization. The Old City of Hebron and the Ibrahimi Mosque were the most recent sites to be added to UNESCO’s list July 7.

However, Nairat said this registration raised the ire of Israel, prompting it to protest UNESCO’s support of Palestinians by reducing its financial contribution to the organization.

The director of the legal department of the Colonization and Wall Resistance Commission, Ayed Marar, told Al-Monitor that implementing this route would be illegal because it passes through land and property belonging to the Palestinians, putting the area at risk.

He described the move as an attack on this property, while denying Israel's claim that the route passes through areas with historical Jewish origins.

Marar called on the Palestinian government to appeal to the Israeli Supreme Court and international courts. He urged Palestinians who hold foreign passports and through whose land the route passes through to file complaints in the courts of their respective countries. He also stressed that this route must be fought by all means available to the Palestinians, making a point of all international conventions that have granted them this right.

As for popular resistance, Marar emphasized the Palestinians’ ability to protest by organizing sit-ins and marches, noting that while registering Palestinian archaeological sites with UNESCO confers protection for their rights, the body cannot be relied upon to protect them from Israeli attacks.

“This route may be a clear indication that the West Bank and the Syrian Golan Heights remain under Israeli sovereignty,” Omar Jaara, a professor of history and archaeology at An-Najah University, told Al-Monitor. “Israel is trying to expand its territory and influence at the expense of Palestinian property, as it works to create routes and build outposts on their land to limit Palestinian demographic growth.”

Jaara said Palestinian negotiators must maintain the people’s rights stipulated in the resolutions issued by the UN and the UN General Assembly, noting that Security Council Resolution 242 provides for the withdrawal of Israeli forces from the territories occupied in the 1967 conflict. But the Palestinians need to defend their right to remain in their territories and have complete sovereignty over them, he said.