In reaction to Trump’s move to declare recognition of Jerusalem as the capital of Israel, Iranian leaders warned that they won’t tolerate aggression against holy sites. 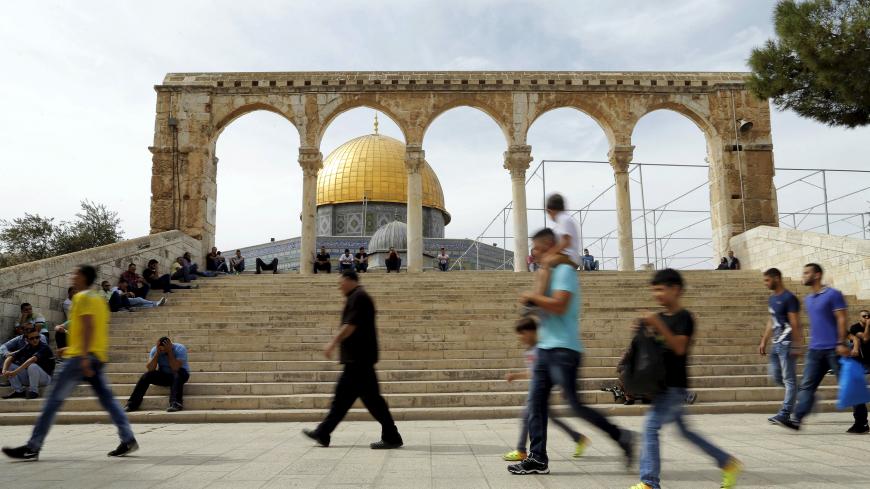 The Dome of the Rock is seen in the background as Palestinians wait for Friday prayers to begin on the compound known to Muslims as the Noble Sanctuary and to Jews as the Temple Mount in Jerusalem's Old City, Oct. 23, 2015. - REUTERS/Ammar Awad

Amid US President Donald Trump’s move to recognize Jerusalem as the capital of Israel, Iranian leaders have stated that Tehran will not tolerate any aggression against holy Islamic sites.

On Dec. 6, in a meeting with government officials, ambassadors of Islamic countries and participants at the 31st International Conference on Islamic Unity, Iran’s Supreme Leader Ayatollah Ali Khamenei reacted to Trump’s move on Israel by saying, “Their announcement of Quds [Jerusalem] as the capital of Occupied Palestine [Israel] proves their incompetence and failure. In regards to Palestine, they are helpless and unable to achieve their goals. Victory is for the Islamic nation. Palestine will be free, and the Palestinian people will be victorious.”

Describing the United States and Israel as oppressors, Khamenei said, “The modern-day pharaoh is represented by the US, the Zionist regime and their accomplices in the region, who seek to create wars in our region, and this is plotted by the US.”

Khamenei continued, “Today, some enemies and individuals line up against the Islamic nation and the path of the Prophet [Muhammad].” The Iranian leader, however, added that Tehran doesn’t seek war.

“We have no conflict with Islamic nations. We seek unity. But in response to this willingness to forge unity, there are some who seek a war and their policies are based on war. In response, we admonish [them]; we use a language of advice; we rely on admonition. The destiny of the approach that some governments in the region take, as noted in the Quran, will be self-destructive,” the supreme leader said.

At the same meeting, President Hassan Rouhani joined Khamenei in condemning any attempt by the United States to recognize Jerusalem as the capital of Israel. “Today, the enemies have launched a new conspiracy against the Muslims and have targeted the great goal of the liberation of the Holy Quds,” said Rouhani. “The Holy Quds belongs to Muslims and Palestinians, and it is not a place in which anyone can stand against the thoughts and feelings of the people. This is a new adventure of the 'global arrogance' in the region.”

The Iranian president also said, “Although the Islamic Republic of Iran has responded to the call by the nations [seeking its aid] by supporting them, and wants to resolve problems through negotiation and has never agreed to changes in the borders in the region, it will not tolerate aggression against Islamic sanctities.”

Moreover, in a phone conversation with Turkish President Recep Tayyip Erdogan on Dec. 6, Rouhani urged Islamic countries to be united in the face of Trump's “illegal, provocative and very dangerous decision.”

The Iranian president said, “Islamic countries and all the free countries of the world must act quickly against Washington's move … to stop them.” Rouhani also said Tehran will participate in the extraordinary summit of the Organization of Islamic Cooperation.

Erdogan has invited leaders of Organization of Islamic Cooperation member states to convene for an extraordinary summit in Istanbul on Dec. 13 over the Jerusalem issue.