The Rouhani administration has come under fire for proposing higher departure taxes for Iranians who travel frequently. 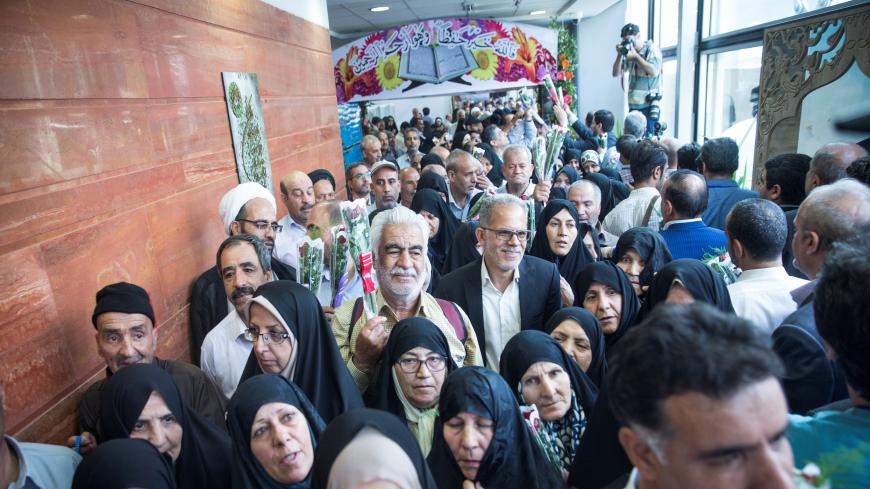 Iranian pilgrims wait at the Imam Khomeini Airport as they depart for the annual hajj pilgrimage to the holy city of Mecca, in Tehran, Iran, July 31, 2017. - REUTERS/Nazanin Tabatabaee Yazdi

A threefold increase in the departure tax proposed by the government has prompted outrage among many Iranians. The proposed hike is part of the administration’s new budget plan for the upcoming fiscal year, starting March 21, 2018. President Hassan Rouhani submitted the draft budget to parliament Dec. 10, but the controversy surrounding the document may prevent its approval.

The proposal of a new government budget in Iran has always been accompanied by a great deal of debate. However, the latest draft seems to be drawing more criticism than before, particularly in the parts that involve departure taxes.

But what are departure taxes and how did they come to be? Iran’s parliament approved this tax in 1985, given the country’s unique situation at the time, namely the Iran-Iraq War and the shortage of government funds. According to the measure, any person who wished to travel abroad via air was required to pay a fee of 50,000 rials ($1.40) to the treasury. Over time, this law became permanent and the fee steadily increased. The current fee is 750,000 rials ($21), but under the new budget plan submitted by Rouhani, this figure would increase to 2.2 million rials ($61.80) for one's first trip abroad. The fee would rise to 3.3 million rials ($92.70) for the second trip and then to 4.4 million rials ($123.60) for all other trips over a 12-month period.

A social media frenzy ensued after news of the proposed fee hike broke, prompting government officials to respond to the situation. “The fact that there are twice as many [Iranian] tourists who exit the country as [foreign] ones who enter is not a good thing," said Ali Asghar Mounesan, the head of Iran’s Cultural Heritage, Handicrafts and Tourism Organization, on Dec. 10. "Previously, some 100,000 rials ($2.80) of each departure tax would go to the Iranian Cultural Heritage Center. With the increase, 400,000 rials ($11.24) [of each departure tax] will be allocated to this organization.”

The proposed fee structure is expected to significantly impact middle-class Iranians. “We could barely afford to go on a cheap trip to Turkey, which does not require a visa, by saving for several months," Abbas Bahari, a retired Education Ministry employee, told Al-Monitor. "Now, the departure tax fee we must pay for a family of four will be more than the cost of a ticket, hotel and accommodations for more than one person. So, from now on, if a family of four wants to take a small trip abroad, we will have to anticipate the cost for about six people.”

The new fee will not have much impact on Iran's wealthy strata, since they can afford even greater fees, but Iran’s middle class will have no choice but to postpone foreign trips indefinitely.

“I have also been faced with these criticisms, especially on social media," Mahmoud Vaezi, the presidential chief of staff, told the media Dec. 11. "Today, we have a large government and every month a significant sum must be paid to government employees as salary. On the other hand, the number of people who have retired over the past seven to eight years has increased, and pension funds cannot cover their salaries, so the government pays their salaries. Therefore, if we really want to implement justice, we need to find new sources [of income] and help retirees through these sources and thus eliminate absolute poverty. However, at the same time, the government is prepared to review its decisions if needed.”

Meanwhile, Iranian media outlets compared Iran's tax plan with other countries' and found that Iran's was higher than the rest of the world. Iranian celebrities, artists and athletes also voiced their objections to the proposed hikes on social media, either through satire or outright criticism.

Reactions from Iran's parliament were equally critical. “More than 10 million people travel abroad each year for religious or work-related reasons, to study or for leisure," Saeed Bastani, a spokesman for parliament’s Industries and Mines Commission, said Dec. 12. "However, there are no exact statistics on how many travel for leisure. If the government's reasoning is that those who travel abroad are wealthy and must pay for their pleasure, then we have to say when it is not clear how many of the trips are for leisure, then why should all strata come under pressure?"

The same day, Ghasem Ahmadi Lashaki, a member of parliament’s Cultural Heritage Commission, described the proposal as irrational and unacceptable. “At a time when many countries are seeking to eliminate visas, this manifold increase [in the departure tax] is not rational," he said. "Not to mention that not all people travel abroad for leisure and their trip may be for medical purposes, or to study. … And this hike will put a great deal of pressure on them.”

The government continues to emphasize its shortage of resources for income and seeks to create new resources through innovative approaches. Although these new approaches may give the administration more leeway in paying salaries and subsidies, they risk creating deep dissatisfaction among middle-class Iranians — a class that has supported Rouhani and the Reformists in elections.