Iranians lash out at preferential treatment of pilgrims

While many Iranians have criticized the authorities’ decision to allow visa fees for the Arbaeen pilgrimage to be paid at the secondary foreign currency market rate, the move could, in reality, be filling the administration’s coffers. 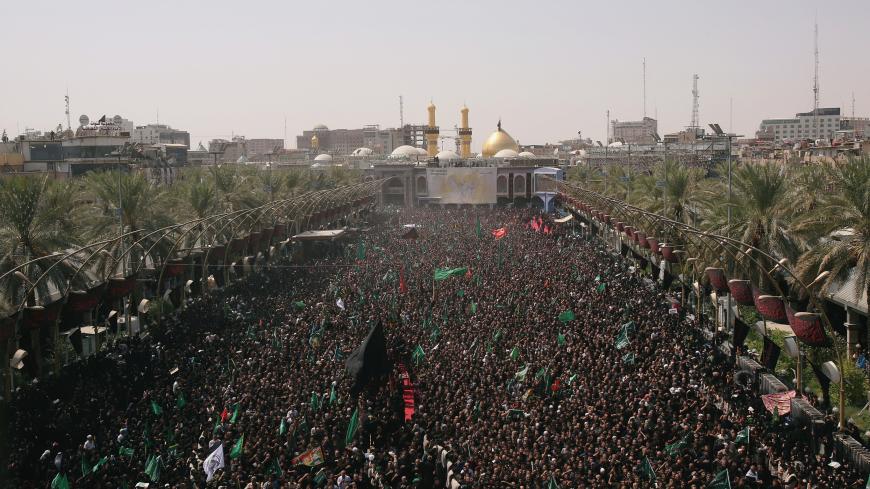 Shiite pilgrims run between the Imam Hussein and Imam Abbas shrines as part of a ritual of Ashura, in Karbala, Iraq, Sept. 20, 2018. - REUTERS/Abdullah Dhiaa Al-Deen

The decision by Iranian authorities allowing pilgrims who wish to visit holy sites in neighboring Iraq to pay visa fees at the rate afforded to importers on the secondary foreign currency market has sparked criticism from both religious and non-religious segments of Iranian society. The controversy is partly fueled by the government’s parallel adoption of policies that seem to increase the cost of leisure travel as part of its austerity measures in the aftermath of the nosedive in the value of the national currency.

On Sept. 18, each dollar was traded for 145,000 rials on the open market — 86% higher than a month before. Over the past year, the rial has lost roughly 70% of its value in what experts believe is a result of a combination of factors, including a massive rise in liquidity in recent years, economic uncertainty resulting from the US withdrawal from the 2015 nuclear deal, and corruption in Iran. Rates on the secondary currency market, where exporters may sell their hard currency proceeds to importers at a negotiated level, hover slightly below the open market rate. The official dollar rate has been fixed at the much lower level of 42,000 rials and set aside for authorized imports of a list of essential goods.

As a result of the rial devaluation, the cost of food, cars, medicine and many other commodities have recorded significant rises in recent months. While imported products are directly affected by the weakening of the national currency, domestically produced goods have also been impacted given the rise in costs of imported raw materials. Meanwhile, to curb the currency outflow associated with leisure travel abroad, the government has increased the departure tax — especially for those who travel frequently — while also putting an end to previous subsidized foreign currency for tourism purposes.

Yet at the same, in connection with the ongoing Shiite holidays in the Islamic month of Muharram and culminating on the day of Ashoura — which falls on Sept. 20 this year — Iranian authorities have announced that pilgrims who wish to attend the upcoming Arbaeen rituals in the Iraqi city of Karbala, where the third Shiite imam is buried, will be able to pay for visa fees at the rate on the secondary foreign currency market. Given that use of the US dollar has been eliminated in transactions between Iran and Iraq, the equivalent of the $41 fee will be calculated in Iraqi dinars or euros. Of note, Arbaeen commonly attracts a massive number of Iranian pilgrims to Iraq. It is marked 40 days after Ashoura, which is the martyrdom anniversary of the third Shiite Imam Hussein — a grandson of Prophet Muhammad.

The move has been met with a wave of criticism from Iranians on social media. “Should the cost of these people’s pilgrimages be paid from the pockets of [other] Iranians?” asked a user on Twitter. Another user accused the government of nepotism in favor of those who support the religious establishment. “Currency outflow means currency outflow, be it for Karbala or Antalya,” he said, referring to a Turkish resort town that is a popular tourist destination for Iranians.

“To find medicine for my mother, I need to scour through a hundred drugstores. It is manufactured by an Irish company alone. No dollars have been allocated [for its import], and its price is [based on the dollar rate on the] open market,” another user tweeted. “Go ahead and grant … dollars to Arbaeen travelers. Your sense of responsibility is unbelievable.”

Religious online users have also criticized the government’s move. “We don’t want it,” a user tweeted. “We travel once a year for Arbaeen. We don’t want that to come with criticism, taunt and torment.” A young user who described himself as a religious person tweeted, “[This policy] hurts the religion. Isn’t it true that all Iranians are equal? Then why don’t you give … dollars to those who travel to Antalya?”

The initial understanding of the government’s policy on visa fees associated with Arbaeen was that pilgrims would receive the hard currency in cash. As such, many argued that this would make way for profiteering and opportunism given the arbitrage between the secondary and open market rates. But officials later clarified the measure, saying that foreign currency for the visa fee will be transferred directly to the Iraqi side via the Central Bank of Iran.

The number of Iranian pilgrims who travel to Iraq to attend Arbaeen has been increasing in recent years, with around 2.3 million attending the festival in 2017. The government says it has been trying to facilitate pilgrimages since they hold significance for the political and religious establishment.

Yet many criticize what they refer to as the costs that the new policy will impose on the government. Nima, 29, who spoke to Al-Monitor on the condition that his surname be withheld, said it will cost the authorities “hundreds of billions of rials,” adding, “Some people say the government [should have] done the same for travelers to Turkey, for example. But that is also a sort of idiocy. In both cases, it is wrong to waste resources at a time when there is a severe shortage [of hard currency].”

“I traveled to Iraq last year. For me, it was a pure spiritual experience, and I hope this will remain so for other people as well,” 36-year-old Ramin told Al-Monitor. “The spiritual aspect of such an experience vanishes when politics get involved. Many of these pilgrims come from the lower middle class and many even from the lower class. They do seek to reduce the cost of the trip, but they usually don’t want their good deed to be spoiled by the pain and suffering of others.”

But the sense that the government is emptying its coffers in a display of preferential treatment of certain strata of society may be misplaced. Indeed, the reality is that in most cases, the government is not legally allowed to sell hard currency revenues at the open market rate. Rather, it must use most of its foreign exchange either for prioritized essential imports or transfer it to the National Development Fund, both at the much lower official dollar rate of 42,000 rials. Thus, specific occasions such as Arbaeen in effect provide the government with an opportunity to benefit financially from the weakened rial by extending "special rates" to target groups. The arbitrage, while not hugely consequential, could provide much-needed breathing room for the government to reduce its budget deficit.

The past few months have been intense for the Islamic Republic, whether at home or abroad. Protesters have taken to the streets in many cities across the country to express their economic grievances, while diplomats have been trying to convince Iran’s oil customers to continue their imports. This comes as the second round of US sanctions targeting Iran’s energy exports — a vital source of income — as well as banking, shipping and insurance is set to be reimposed Nov. 4.

Despite the turmoil and criticism of the way in which the authorities are handling it, the Iranian establishment insists that the volatility is short-lived. “Why do we falsely think our economy is revolving around the dollar and, if the dollar is expensive, every product should become expensive? Does everything come from abroad? Domestic products have nothing to do with the dollar. Don’t pay attention to the dollar,” interim Tehran Friday prayers Imam Kazem Sedighi said Sept. 14. “Today, thanks to the revolution, we have resources, equipment and power. … A few problems have emerged for a while. But this nation will not consider temporary problems as a crisis. It will overcome the problems.”