The regime of Egyptian President Abdel Fattah al-Sisi is using the judiciary to block any credible rival from running in the 2018 presidential election. 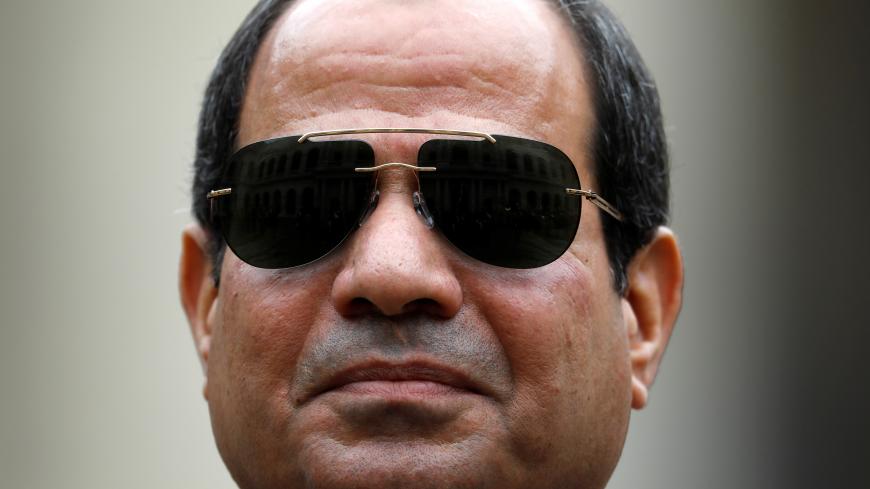 CAIRO — An unknown fate awaits political figures who consider running in Egypt's presidential election next year. So far, the three main potential candidates have all had run-ins with the courts soon after announcing their intentions.

An old case reopened or a new charge filed are among the means being used to prevent challengers to Abdel Fattah al-Sisi from emerging. Anyone wanting to run in the election must apparently first face the courts.

Former Prime Minister Ahmed Shafiq’s announcement Nov. 29 that he intended to run for president triggered a slew of indictments. On Dec. 2, lawyer Mohammad Hamid Salem presented a case to public prosecutor Nabil Sadeq, accusing Shafiq of stirring public unrest and issuing inciting statements on “anti-regime channels." The same day, lawyer Samir Sabry filed a case accusing Shafiq of “treason by appearing on the Al Jazeera channel, which supports terrorism.” Shafiq faced criticism over reports that he sent his candidacy announcement video to the TV channel in Doha, Qatar. Egypt was among four countries that cut ties with Doha in June over its alleged support for terrorism.

Shafiq announced his candidacy from the United Arab Emirates (UAE), where he has resided since 2012. He said Emirati authorities had prevented him from traveling without telling him why. Within days of his announcement, Shafiq's lawyer, Dina Adly, said the UAE had deported him to Egypt and he had been under house arrest in Cairo’s Marriot Hotel ever since.

Two days after reaching Cairo, Shafiq hinted in a phone interview on Dream TV news that he would rescind his candidacy, withdrawing his accusation that the UAE had prevented him from traveling. “I wasn’t kidnapped. I am staying in an excellent hotel in Cairo,” he said. About his candidacy, Shafiq added, “I think I need to see things in detail, to go into the streets and see the reality.”

Shafiq further denied accusations of sending a video of his announcement to Al Jazeera, saying the video was on his daughter’s phone, which was hacked.

On Dec. 2, the military prosecution summoned Col. Ahmed Konsowa for questioning after he announced his candidacy Nov. 29. It ordered him detained for 15 days for questioning.

His lawyer, Asaad Haykel, said in a press statement that Konsowa was facing charges of “behavior detrimental to the requirements of the military regime” over a video he posted laying out some of his political views, and for wearing his military uniform while expressing his political views when he announced his plans to run.

“Konsowa is still a member of the armed forces and affirms that he is proud of his service,” Haykel said in another press statement Dec. 3. “He is not a rebel or a defector. He put himself forward as a candidate, as did Sisi."

Konsowa, an engineer in the armed forces, had announced he was leaving the military institution in 2014, citing his “desire to enter politics and run [in the] elections,” but his resignation was denied.

On Dec. 19, the North Cairo Military Court senteced Konsowa to six years in prison on charges of violating the military regime and military orders and instructions.

Prominent lawyer Khalid Ali, who announced Nov. 6 that he would also run for president, is waiting for an appeals hearing Jan. 3 after he was sentenced in September to three months in prison and fined 1,000 Egyptian pounds (about $56) on charges of “obscene acts on a public thoroughfare” over a hand gesture he made after an Egyptian court annulled a border agreement between Egypt and Saudi Arabia.

Lawyer Gamal Eid told Al-Monitor the regime is prepared to use any means to prevent candidates who pose a threat to Sisi from running in the election.

“The military courts have been used against Konsowa because they are not independent. They are under the aegis of the supreme commander of the armed forces [Sisi],” he said. “Konsowa is not guilty of any crime, but he copied Sisi, who also announced his candidacy while he was still in military uniform.”

Eid added that Shafiq had been betrayed, as he could have been told that he was unwelcome in the UAE or been given a deadline to leave. Instead, what happened was that he was handed over to the Egyptian regime. He added that Ali’s ordeal shows that the regime will use every means available to discredit rivals and prevent them from running.

“The regime hasn’t just used one method,” Eid said. “It will not allow anyone to run unless they have a deal with it, guaranteeing Sisi’s victory if he decides to run for a second term. If he doesn’t [run], the military apparatus will choose another candidate from among its former leadership.”

Hassan Nafea, a political science professor at Cairo University, said the regime does not want transparent presidential elections. “There are deliberate attempts to smear anyone who tries to put themselves forward as a candidate,” he told Al-Monitor.

He added, “What happened to Shafiq and Konsowa was evidence of political stupidity, lack of experience and the regime’s insistence on keeping the security apparatus in control of everything.”

The president hasn't yet announced he will run for another term.

Nafea noted most of the crises currently facing the state are linked to Sisi, but the military apparatus has not yet prepared a potential alternative candidate.