More Iraqis than ever are seeking out cosmetic surgery and other services, and many unlicensed facilities and providers are rushing to meet the demand. 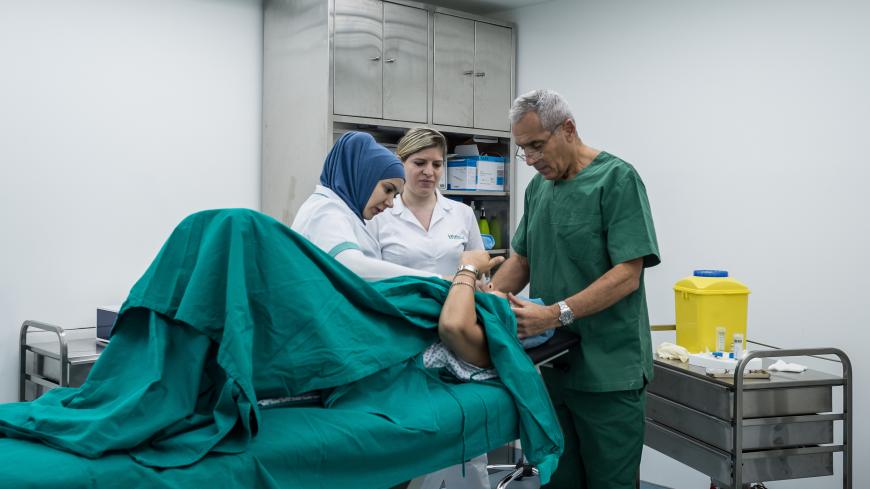 BAGHDAD — From a quick visit to the local barber shop for laser hair removal to a trip to Lebanon for liposuction, Iraqis from all walks of life are turning to cosmetic surgery.

An annual report issued by the International Society of Aesthetic Plastic Surgery places Iraqis as the top nationality receiving plastic surgery in Lebanon. According to the report, 0.3% of cosmetic operations of 2016 were carried out in Lebanon.

In Iraq, however, those who perform unlicensed cosmetic operations will find it difficult to give stem cell injections and laser treatments in the future. The Ministry of Health is shutting down unlicensed beauty salons and massage parlors in Baghdad, according to a report by Al-Hurrah News. The report said that more than 52 salons in Baghdad were closed on Nov. 17, when the Ministry of Health began the operation.

The unauthorized salons are a response to the growing demand from Iraqis of all social classes, not just the rich, for cosmetic surgery.

The editor of the All Beauty Guide website, which evaluates Baghdad's beauty salons, told Al-Monitor, “Hundreds of beauty salons have spread in Baghdad and other provinces over the past couple of years.” The editor, who asked not to be named, also pointed out, “Iraq has become a cheap and convenient destination for plastic surgery, with many patients coming from neighboring countries.”

According to the Tajmeeli website, which provides information on cosmetic procedures, tummy tucks are very common in Iraq and carried out by qualified specialists starting at $750 per operation, a price affordable for middle-class families.

But Iraqis still prefer to travel abroad for plastic surgery if they can afford it, according to Dr. Qassim Hussein Salih, the head and founder of the Iraqi Psychological Association. “Iraqis are still steadily traveling abroad for cosmetic surgery despite the rising numbers of beauty salons and clinics in Baghdad and the provinces,” Salih told Al-Monitor, explaining that confidence in Iraqi beauty clinics is still low.

One of the main reasons for cosmetic surgery among women is the desire to increase prospects for a good marriage, he said. But he finds the line blurred between utilitarian and psychological motivations, explaining, “Some men and women have certain facial and physical features that make them feel less confident and push them to seek social acceptance and self-approval [through cosmetic surgery].” Salih also cited other psychological issues, such as the obsession with beauty that is boosted by celebrities and other role models as well as depression and dissatisfaction with other aspects of daily life.

While at one time such operations were “restricted to specialized doctors with high technical skills and credibility,” according to Salih, the growing beauty business has prompted nonexperts to enter this lucrative sector and perform injections and minor operations.

In Baghdad, a wide variety of institutions advertise for beauty services and treatments. Chinese and Turkish massage and sauna centers promise weight loss, cellulite treatment and fat control through massage or steam treatments. These facilities also promise treatment for back pain, muscle cramps, headaches and tension. Some even offer hair transplants, cosmetic dentistry, skin whitening and reduction of age spots as well as minor surgery such as Botox and stem cell injections. These operations are often unauthorized.

Abdul Hadi Mohan al-Saadawi, a member of the parliament's committee on health, told Al-Monitor that beauty salons run by certified professionals can be a positive thing, explaining that they can “help improve people’s health [if] they are run by specialists who treat important cases like obesity.” He also pointed out that victims disfigured by accidents and terrorist attacks go to salons for minor operations. Saadawi noted, however, that the burgeoning industry is marred by murky credentials and malpractice lawsuits.

Saad Maan, the spokesman for the Ministry of Interior, told Al-Monitor, “Stopping sketchy and illegal places is necessary to distinguish such facilities from legal ones, which would increase the level of trust in health centers.”

At Baghdad's Al-Khayal Hospital, a staff member who asked not to be named told Al-Monitor that some of the operations, such as tummy tucks, are not a luxury but a necessity after childbirth. He said that major operations that require the use of anesthesia, such as tummy tucks or liposuction, should be done at a proper medical center.