As the popularity of cosmetic surgery increases in Iran, low-cost, unlicensed clinics have increased as well. 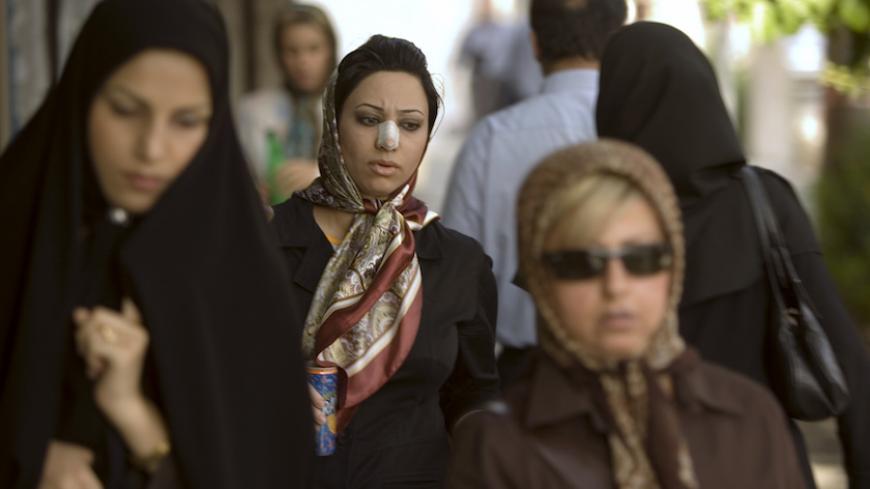 A woman walks along a street in Tehran after undergoing nose surgery, June 24, 2007 - REUTERS/Caren Firouz

Sara, who would only give her first name, is 35. She's married and recently gave birth to her first child. She is unhappy with the way her body has changed: “After I gave birth, I tried very hard to lose weight. I went to the gym and tried many different diets but nothing worked. One of my friends suggested that I do liposuction and have the extra fat removed from my body. I had seen a lot of advertisements regarding this in the satellite programs. After some consultations, however, I realized that not all doctors, or clinics, are trustworthy since many of them do not have the necessary specialties.”

This conversation might have sounded strange to Iranians a decade ago, but today such surgeries are performed regularly in Iran. Botox, lip augmentation, upper eyelid surgery (blepharoplasty) and eye lift procedures are among the cosmetic surgeries that Iranian women are interested in. These procedures are not cheap, however, and sometimes they cost more than a few months’ salary for someone making the minimum income as defined by the Ministry of Labor and Social Affairs of Iran — minimum income of a single laborer is $270 per month, whereas a chin reduction procedure on average costs $1,500 to $2,100.

Maryam Safara, a psychologist and a faculty member at Alzahra University, said in an interview with Iranian media: “One of the main reasons that the number of cosmetic surgeries have increased is that people’s self-esteem has decreased. In other words, someone, who has not found her true place and is not satisfied with who she is, will try to gain that necessary satisfaction this way.”

Until 10 years ago, cosmetic surgeries in Iran were limited to nose surgeries for women and hair implants for men. People used to hide the fact that they have gone through these procedures. After hair transplant surgery people would take a break from work or go on a trip, and would only return when the evidence of the surgery was no longer visible. Gradually, this attitude changed and most people no longer have any problem with demonstrating that they have gone through a procedure. The number of these surgeries has risen so much that even official government organizations do not have accurate statistics.

Abdolhossein Emami, head of the Association of Iranian Cosmetic Surgeons, told Iranian media: “We do not have accurate statistics regarding cosmetic procedures performed in the country since, so far, we have not gathered accurate information from any of our cosmetic or medical centers. Doctors, for economic reasons, are not willing to tell us the number of their patients. However, we know that the numbers of cosmetic surgeries performed in Iran are increasing.”

According to the statistics released by the Rhinology Research Society of Iran, more than 80,000 cosmetic nose surgeries are performed in Iran every year. However, these statistics only include surgeries performed by plastic surgeons, and do not include operations by nonspecialist doctors.

Of course, since these procedures are so popular among Iranians, the number of illegal and nonstandard operations has increased in Iran.

Shima, 29, decided to have a nose job two years ago. But the high cost, when done by a plastic surgeon, motivated her to instead do the surgery in the office of an otolaryngologist.

Now, Shima told Al-Monitor, her nose does not look better, and she has developed breathing problems. Shima said that because she wanted to pay less for this surgery ($450) she took the risk.

To get a better understanding of these unusual cosmetic surgeries, I made an appointment at a clinic in a modern office building in Gheytarieh, a neighborhood in northern Tehran. I wanted to know the doctor's specialty but I could not find any references. Finally, I saw the license on one of the walls and realized that the doctor performing these procedure is not a specialist. Her rates are lower than those offered by specialists, which is why she's so busy.

I talked to a young lady sitting next to me. Yasmine, 33, said that she's losing some of her hair and she has heard that certain injection treatments can help increase her hair's volume. She said one of her friends has done it and is satisfied with the result, and she herself has done research on the Internet. She said she chose this clinic because the doctor is pleasant and the prices are cheaper than other clinics.

According to the International Society of Aesthetic Plastic Surgery, Iran is in the top 10 of countries with the highest number of cosmetic procedures.

Still, a lot of young women oppose these procedures. There's a Facebook page “My Natural Nose” in which more than 1,000 people have shared images of their real noses.

Can a campaigns like this control Iran's epidemic of cosmetic surgery?

Safara said, “Naturally, actions such as these are not effective by themselves. Alongside these campaigns, we should have educational programs. We should educate young women and correct this assumption that there is a connection between success and cosmetic surgery.”