Despite of and because of the social, economic and political problems in Gaza, more residents are having cosmetic surgery in the hope of living better lives. 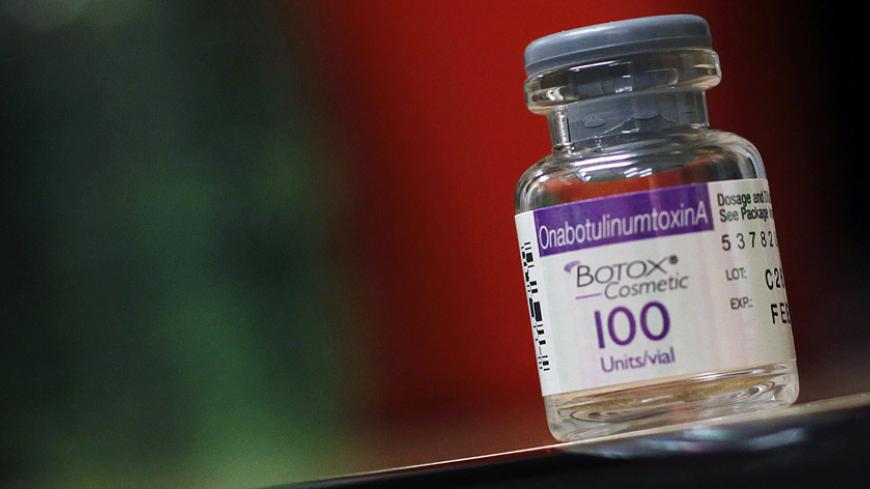 A sample of Botox is seen at the Long Island Plastic Surgical Group in Manhasset, New York, Sept. 30, 2010. - REUTERS/Shannon Stapleton

GAZA CITY, Gaza Strip — Pregnancies significantly changed Safa Ahmad's physical appearance, which began to affect her marriage and cause her psychological problems. About five months ago, Safa, a 28-year-old living in Gaza City, had breast implants in the hope they would help her feel better psychologically and improve things at home.

“My husband wanted to marry someone else because of the changes in my looks after I gave birth to three sons," she told Al-Monitor. "But by coincidence, I heard about cosmetic surgeries in Gaza, and I suggested to my husband that I have one. He immediately agreed, so I got silicon breast implants, and they drastically changed my looks as well as my marital and family life. My husband then let go of the idea of marrying someone else.”

It's not only women in Gaza getting cosmetic surgery. Men are also having it. Ahmad Hassan, 32, felt stuck in life after a number of girls rejected his proposals of marriage because wrinkles on his face made him look like a man in his 50s.

“I had cosmetic surgery to remove the wrinkles covering my face so I could have a normal life and find a girl who accepts me. Dozens of girls rejected me before I had the wrinkles removed," he told Al-Monitor. "About two weeks after the operation, I was in a relationship.”

The difficult economic and social situation in Gaza does not appear to be preventing Gazans from undergoing cosmetic surgery in search of happiness, which is difficult to find given the siege of Israeli occupation and recurring wars.

Dr. Salah Zaanin, a cosmetic and laser surgery consultant, started working in the field three years ago in a private hospital in Gaza City. The high demand for cosmetic surgeries, by men and women, led him to open his own clinic.

Zaanin told Al-Monitor that three years after returning from Greece and working in the Gaza Strip, he found that rapid progress had been made in this area and that the demand for surgery, despite the economic and other problems Gaza residents were experiencing, had increased. “We are a people who love life and beauty like all other people," he said. "Because of the psychological pressures, a lot of women began looking after their emotional and physical well-being, especially after learning of the advances in cosmetic surgery and the presence of modern equipment in Gaza.”

Zaanin said he has conducted hundreds of cosmetic operations in Gaza, all of which were successful. Some clients even began entrusting him with operations that used to be referred to the outside.

He said that the most common procedures in Gaza are liposuction, breast augmentation and “tummy tucks” for women. Tightening eyelids and removing bags under the eyes are popular as well. “In the past month, using Botox to fill and remove wrinkles in men and women rose by 600% in my clinic, indicating that despite the blockade and the stress, we are trying to be happy by looking better," Zaanin said. "In addition, there has been a 300% increase in lip augmentation and beautification.”

The economy, of course, still plays a role in the demand for certain types of operations even with the prices in Gaza being low compared to other countries. Zaanin said that the fees for cosmetic surgeries in the Gaza Strip are the lowest in the world and that they depend on the materials used in a procedure. “Cosmetic surgeries range in price from $1,000 to $2,000, while nonsurgical [silicon injections] cost up to $300," Zaanin said. "Therefore, all social classes are resorting to cosmetic surgery. For example, the poor opt for low-priced operations. Everyone should have the right to enjoy and live life, and I feel happy when I can make that happen for someone.”

Zaanin also said that the changes in Eastern societies, such as women entering the workforce, their financial independence and the importance of looking good, have all played a role in the growing popularity of cosmetic surgery among women and men. He said that all operations are conducted within Gaza's religious and social frameworks and medical standards. “Women come accompanied by their guardian, either the father or the husband, and we do not conduct operations without them," Zaanin said. "In fact, many men choose to have such operations because of these visits.”

Despite the difficult economic, political and social situation in Gaza, and the related psychological repercussions on Gazans, cosmetic surgery appears to offer some of them a chance at better lives and happiness.

*All names of patients in this article have been changed to protect the identities of the interviewees.