Yemen has lost a lot of its trees, shrubs and flowers since the beginning of the war in 2015, in what could make matters worse for Yemenis haunted by the specter of starvation. 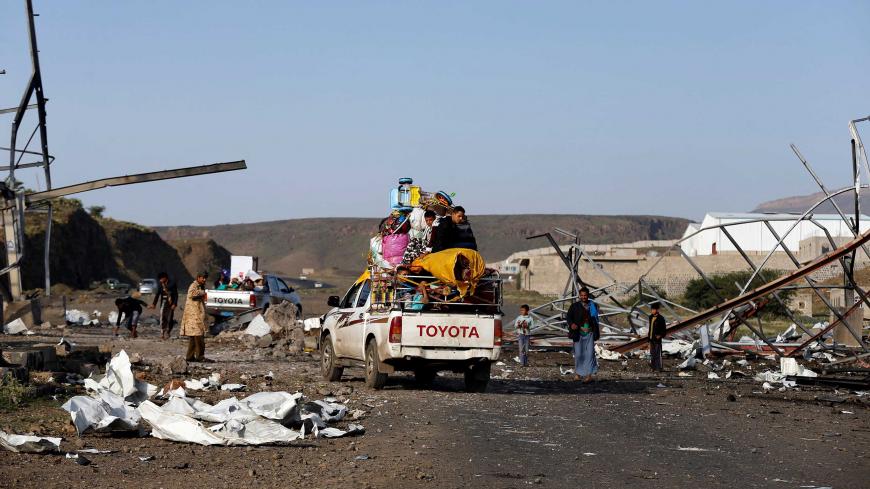 A truck carrying travelers passes by a checkpoint of the armed Houthi movement after it was hit by a Saudi-led airstrike near Sanaa, Yemen, Aug. 30, 2017. - REUTERS/Khaled Abdullah

SANAA, Yemen — In addition to the devastating human cost, the Yemeni capital Sanaa has lost 40% of its trees, green spaces and flowers since the beginning of the war in March 2015.

With an area of ​​390 square kilometers (150 square miles), Sanaa is home to around 2 million people as per unofficial 2010 estimates — the latest available — but an increase in population has been registered due to waves of internal displacement caused by the war.

According to a report issued by the Task Force on Population Movements in July, the number of internally displaced people reached 1.98 million, 25% of whom live in Sanaa.

Mohammed al-Namri, the representative of the municipalities and parks affairs in the Sanaa municipality, told Al-Monitor, “The total number of green spaces and trees in Sanaa does not exceed 8% of Sanaa’s area, which is a low rate compared to the area and population density, and we unfortunately lost up to 40% of that area since the beginning of the war to date.”

“We have lost about 248,343 square meters [61 acres] of the total green area of Sanaa's big and small parks since the start of the war,” he added.

Sidewalks, central islands and public facilities also seem to have had their share of destruction.

Abdul Aziz al-Junaid, the deputy director general of the agriculture office in the Sanaa municipality, told Al-Monitor, “The latest census carried out by the office this year on trees, flowers and shrubs on the streets, sidewalks and in central islands indicated that the Sanaa municipality lost 13,000 trees, 20,000 shrubs and more than 70,000 flowers throughout different neighborhoods.”

Asked about this loss, Junaid attributed it to “the decline in the financial resources of the municipality as a result of the war and the blockade, the lack of funds dedicated to green spaces, the ongoing scarcity of oil derivatives that are needed to operate the artesian wells of gardens and the lack of pesticides.”

Abdo Mohammed al-Qadi, the director of technical management of gardens at the Sanaa municipality, told Al-Monitor, “There are more than 400 trees in al-Thawra Park alone. While those trees date back 40 years, their roots have been eroded by drought, and being responsible for the management of the gardens, we are currently required to uproot these before they fall on visitors.”

Uprooting operations, however, have thus far been hampered by the lack of funds. Al-Sabeen Park, which is another big park in Sanaa, is also suffering from the same problem.

Yemen has been battling a war since March 2015. Sanaa has been under the control of the Houthis since they seized power in September 2014 and is free of any internal conflicts or fighting except for the sporadic airstrikes carried out by the Saudi-led Arab alliance.

Sanaa, which is 2,150 meters (7,053 feet) above sea level, loses a high amount of oxygen with the loss of trees. Studies suggest that mature trees can absorb up to 150 kilograms (330 pounds) of carbon dioxide per year. In other words, trees play an important role in mitigating the effects of climate change and improving air quality, especially in cities suffering from high levels of pollution.

According to UN statistics, this war has killed more than 8,530 people, mostly civilians, and injured 48,800 people in airstrikes and fighting on the ground. The World Food Program says 17 million Yemenis suffer from food insecurity, while 2 million face the threat of famine.

UN Undersecretary-General for Humanitarian Affairs Stephen O'Brien said in an Aug. 18 briefing to the UN Security Council, “Today, millions of people in Yemen are facing a triple tragedy: the specter of famine, the world’s largest ever single-year cholera outbreak, and the daily deprivation and injustice of a brutal conflict that the world is allowing to drag on and on.”

Junaid said, “We found that not only drought and negligence have been behind the loss of trees but also the uprooting of lots of trees by citizens [to use as firewood] as a replacement for cooking gas — which is often unavailable — and is sold at high prices if available.”

Junaid added, “Some schools stopped operating while others have been destroyed by bombs and the war, thus resulting in the loss of many trees and green areas.”

According to a UNICEF report, up until July, 1,600 schools had been partially or totally destroyed in Yemen, 170 schools were used for military purposes or as a shelter for displaced families, and an estimated 2 million students dropped out of school.

Asked about the required tools to solve this problem, Namri revealed to Al-Monitor a plan developed by departments in the Sanaa municipality of the capital. The plan focuses on how to preserve the remaining trees and provide urgent means to compensate for the lost trees, flowers and green spaces in gardens and streets in Sanaa. The plan also includes raising societal awareness.

“These solutions, however, cannot come to light in the absence of the support and funding of international organizations working in Yemen, such as FAO [UN’s Food and Agriculture Organization], among others. We are keen to submit this plan to these organizations because it is difficult to implement it amid the difficult financial conditions plaguing the municipality secretariat of Sanaa as a result of the war and the blockade,” Namri added.

The suffering of Yemeni citizens is increasing by the day. The continuation of the war only inflicts more damage to the miserable Yemeni citizens amid the neglect of most Yemeni political forces.