As the fight against the Islamic State winds down, the Donald Trump administration says it plans to get back the weapons it loaned to Kurdish troops opposed by Turkey. 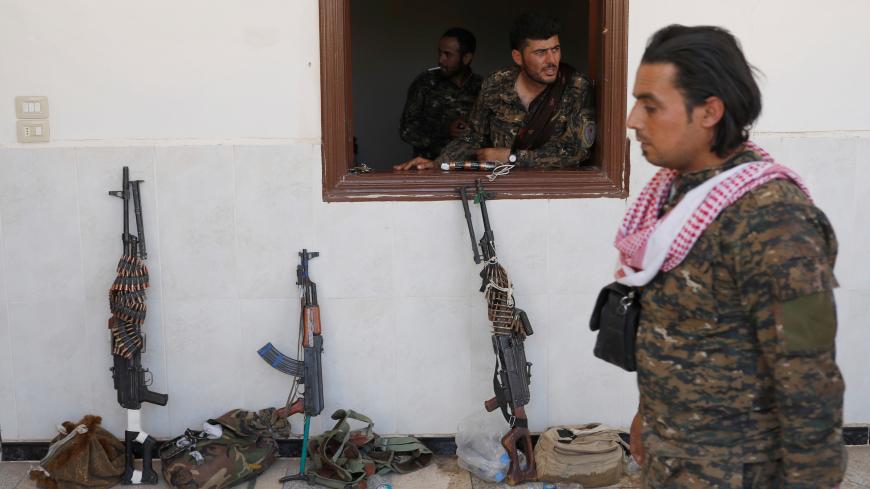 A Kurdish fighter from the People's Protection Units looks out of a window in Raqqa, Syria, June 18, 2017. - REUTERS/Goran Tomasevic

The Donald Trump administration plans to ask Kurdish fighters in Syria to return US weapons loaned for the fight against the Islamic State (IS), but the administration is not ending all support despite growing pressure from NATO ally Turkey.

The message from White House and Pentagon officials on Monday appeared to walk back assertions from Turkey’s top diplomat that Trump had promised to cease support to Kurdish elements of the Syrian Democratic Forces (SDF). Turkey considers the group’s Kurdish faction, the People’s Protection Units (YPG), to be a terrorist group.

“Once we started winning the campaign against [IS], the plan and part of the process is to always wind down support for certain groups,” White House spokeswoman Sarah Huckabee Sanders said at a briefing on Monday. “Now that we're continuing to crush the physical caliphate … we're in a position to stop providing military equipment to certain groups. But that doesn't mean stopping all support of those individual groups.”

One US official told Al-Monitor that the Pentagon never sought to provide permanent arms to YPG factions of the SDF, but rather loaned them out for the duration of the conflict against IS in Syria. Throughout the operation, the Pentagon declined to put timelines on the monthslong battles to take back control of Raqqa and other Syrian towns, which proceeded more quickly than anticipated.

US Department of Defense officials said that support to the Syrian Kurds would continue for the time being, subject to a review that’s been ongoing ever since Trump authorized enhanced military support to US-backed forces earlier this year. Recently, the US government provided communications equipment to the Raqqa Internal Security Force, a Kurdish and Arab police unit charged with stabilizing the area after the fall of IS, and coalition officials say they have received no orders to stop giving out Pentagon equipment in Syria.

“We are taking a hard look at the adjustments that need to be made to support our Kurdish partners,” said Col. Rob Manning, a Pentagon spokesman.

Over the summer, the US-led coalition to defeat IS said it had set up a monitoring database complete with serial numbers in an effort to keep weapons delivered to the YPG out of the wrong hands. So far, “there have been no changes to the levels or types of support that we are providing to the SDF,” a coalition official told Al-Monitor.

The Defense Department said it had shared lists of major military equipment provided to the YPG — such as heavy machine guns and Humvees — with Turkey to ensure their safe return, and it intends to take back “large vehicles and heavy or crew-served weapons” once IS has been defeated.

The effort is not unprecedented. Many of the Pentagon’s efforts to recoup weapons are classified, but other attempts to track supplies to armed groups have suffered from poor record-keeping.

In May, Amnesty International obtained a US government audit that faulted the Army for failing to properly track more than $1 billion in equipment destined for the Iraqi army, Shiite militias and Kurdish peshmerga forces. The report follows a 2015 research report by Action on Armed Violence, a UK-based arms monitor, that found the Pentagon lacked records for more than half of the 1.45 million weapons handed out in Iraq and Afghanistan. And in the early 1990s, the CIA spent millions of dollars in Afghanistan to recover Stinger anti-aircraft missiles given to jihadi groups during the conflict against the Soviet Union, with limited success.

More recently, the Pentagon said it had been able to recuperate some heavy weapons from Shuhada al-Qaryatayn in Syria after the United States cut ties with the group because it decided to take on pro-Bashar al-Assad forces rather than focus on IS. US officials, however, said they were unable to recover trucks and other material handed out to the group.

With those problems in mind, getting weapons returned to the United States from the YPG — and keeping them away from militant groups such as IS — will be easier said than done, experts say.

“There’s only so much you can do from afar to make sure the weapons stay with the intended recipient, especially on the battlefield,” said Matt Schroeder, a senior researcher with Small Arms Survey, a Geneva-based project that tracks weapons and munitions around the world. “It’s extremely difficult with nonstate actors because oftentimes they don’t have depots built for this purpose.”

The 2018 National Defense Authorization Act, Congress’ key defense policy bill, allocates another $500 million to the fight against IS in Syria until next September, equipping an additional 5,000 rebel troops with AK-47s, heavy machine guns, sniper rifles and more than $21 million in stipends. That figure includes arms for Syrian Kurds and the creation of temporary facilities that could be used to stage forward operations and hold stocks of arms and ammunition supplied from US facilities in Kuwait and Jordan, creating a possible buffer against battlefield proliferation.

But with IS nearly defeated on the battlefield, Pentagon officials say they are not sure how much of that money they will ask Congress to appropriate. Only about 3,000 IS fighters are believed to remain in eastern Syria and western Iraq, down from nearly 45,000 militants at the height of the self-declared caliphate in 2015.

The effort to recoup arms from the YPG could also be made more difficult as Russia pushes for a political settlement in Syria that would empower President Bashar al-Assad. The Syrian leader has sought to reassert control throughout the war-torn country, including in Kurdish-dominated areas in the north that are eyeing more autonomy from Damascus.

“These people fighting for their perceived freedoms, are they going to hand back their guns?” asked Iain Overton, the executive director of Action on Armed Violence and the leader of the 2015 survey of US arms delivered in Iraq and Afghanistan.

The effort to recoup the weapons could shed light on the Pentagon’s classified accounting procedures, said Overton, giving Congress and independent watchdogs a better sense of US arms policy. He said that prior Pentagon policy has focused on arming nation-states that can track and monitor equipment, as opposed to nonstate actors.

“The question is, where are these loans recorded?” Overton told Al-Monitor. “It opens up a whole new Pandora’s box of how the United States is arming groups around the world.”