After at least 400 people were killed and nearly 7,000 people were hurt in a 7.2-magnitude earthquake that hit the Iran-Iraqi Kurdistan border yesterday, Turkey has pushed aside its anger over the Kurdish independence efforts and stepped in to help. 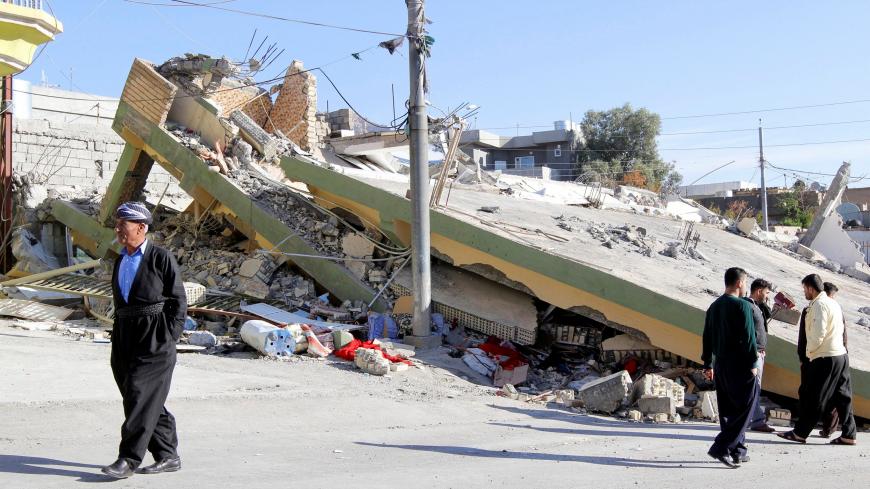 People walk past a damaged building following an earthquake in the town of Darbandikhan, near the city of Sulaimaniyah, Iraq, Nov. 13, 2017. - REUTERS/Ako Rasheed

Setting aside its wrath over Iraqi Kurdistan’s ill-fated referendum on independence, Turkey was the first foreign country to respond with aid for thousands of victims of a massive earthquake that struck near Iraq’s border with Iran on Sunday.

A military cargo plane carrying medical supplies, doctors and a search-and-rescue team arrived in the Iraqi Kurdish city of Sulaimaniyah today, and an aid convoy of 50 trucks crossed through the Habur border gate.

“I wish a speedy recovery to the people of Iraq. … I offer my condolences,” said Turkish President Recep Tayyip Erdogan before setting off for the Russian city of Sochi, where he is scheduled to hold talks with President Vladimir Putin. “As you know, in such times of difficulty, Turkey always rushes to the side of its brothers in the region,” he added.

Some Iraqi Kurdish leaders appear to entertain hopes that the earthquake may lead to a thaw with Turkey. The prime minister of the Kurdistan Regional Government (KRG), Nechirvan Barzani, acknowledged Turkey’s help during a news conference today. An Iraqi Kurdish official told Al-Monitor on condition of anonymity that contacts with Erdogan’s office had resumed. More critically, the official added, Ankara has said that the military drills it has been conducting, widely seen as a show of force against Iraqi Kurdistan’s independence moves, have now been concluded. “That is huge,” the official said.

Turkish Foreign Minister Mevlut Cavusoglu suggested, however, that Turkey’s feelings on the Kurdistan referendum remained unchanged. “Our position is obvious. Other than that, we have always helped the people of Iraq without discrimination. From the very beginning we are the country that has helped the Iraqi [Kurdistan] regional government. The referendum is another matter; this a humanitarian matter,” he said.

At least 400 people were killed and nearly 7,000 people were hurt in the 7.2-magnitude trembler. The US Geological Survey said it hit at 21:18 local time about 20 miles (32 kilometers) southwest of the Iraqi Kurdish town of Halabja, scene to a deadly chemical attack by Saddam Hussein in 1988. The tremors were felt in Turkey’s southeastern province of Hakkari and as far afield as Israel and Kuwait.

Many of the victims were in the Iranian town of Sarpol-e Zahab, about 10 miles (16 kilometers) from the Iraqi border. On the Iraqi side, the worst damage was in Darbandikhan in the Kurdistan Region, according to the BBC, where at least seven people were reported killed. The US-designed Darbandikhan dam on the Diyala River in Sulaimaniyah was also damaged, with cracks appearing in the structure and the roads around it, reported the Iraqi Kurdish online news portal Rudaw.

Iraqi Kurdistan has been bogged down in crisis in the aftermath of the Sept. 25 independence referendum that was held over the objections of Baghdad, Washington and regional heavyweights Iran and Turkey, who fear Kurdish independence in Iraq would infect their own restive Kurds with similar desires.

Massoud Barzani, the president of the Iraqi Kurdistan Region, is being blamed for the aftermath of the referendum that saw Iraqi security forces and Shiite militias regain full control over the disputed province of Kirkuk and other areas both the Kurds and Baghdad claim as their own. He stepped down on Nov. 1, handing the reins over to his nephew, Nechirvan. Presidential and parliamentary elections that were meant to be held on that date have been postponed and no new date set, adding to the political uncertainty that is gripping the cash-strapped Kurdish enclave.

Baghdad is now demanding that the Kurds allow federal government officials to monitor the Kurdistan Region's main crossing with Turkey, together with an oil pipeline that carries Kurdish crude to the Turkish Mediterranean port of Ceyhan. US-brokered talks aimed at establishing a joint monitoring mechanism being held between KRG Interior Minister Karim Sinjari and Iraqi Chief of General Staff Othman al-Ghanimi have failed to produce any results so far.

Hemin Hawrami, a senior assistant to Massoud Barzani, griped in a tweet, “Even in response to the earthquake which hit Kurdistan last night, [Prime Minister Haider al-Abadi] has not uttered a word for casualties & wounded people in Kurdistan region & not offered any help or even a condolences message. This is another force of pulling Iraq apart."

KRG Foreign Minister Falah Mustafa is in Washington, where he is scheduled to meet, among others, with US Deputy Secretary of State for Iraq Joseph Pennington, acting Assistant Secretary of State for Near Eastern Affairs David Satterfield and Brett McGurk, the US presidential envoy to the anti-Islamic State coalition, to press for their support in the dispute and to continue to raise the alarm over what they say is growing Iranian influence throughout Iraq.

Turkey, however, continues to rebuff Iraqi Kurdish requests for top-level meetings and has been backing Baghdad’s moves to reassert full control over its borders and oil pipelines. But a senior KRG official told Al-Monitor on condition of anonymity that he detects a shift. “Turkey is now saying they will welcome the Iraqis if they can make their way to the border. In other words, that [Turkey] won’t help them to get there.” The official was alluding to widespread speculation that Turkish forces would help the Iraqis move into Fish Khabur, the strategic wedge of territory that sits between Iraq, Syria and Turkey. The official claimed, "Turkey has woken up to the reality that Iran poses a threat to them, too."