Turkish President Recep Tayyip Erdogan says legal action could be taken against more mayors if their political parties do not "solve problems themselves." 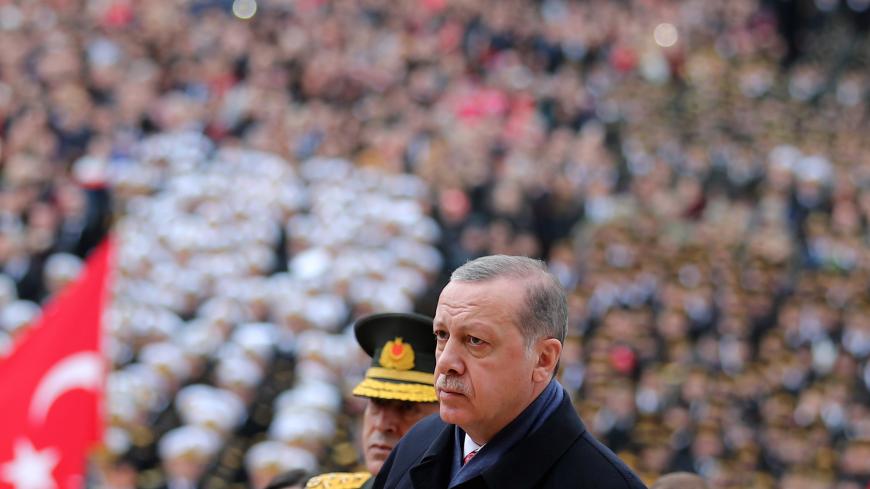 The resignation of Ankara’s eccentric mayor capped weeks of speculation and more city leaders are thought to be on their way out, with Turkish President Recep Tayyip Erdogan now suggesting the purge could spread to municipalities controlled by the main opposition party.

Ankara’s Melih Gokcek is one of six mayors from the ruling Justice and Development Party (AKP) forced out by Erdogan since September as the president seeks to combat what he calls “fatigue” within the party. Previously, the government forcibly removed almost all of the 102 mayors belonging to the pro-Kurdish opposition, appointing unelected administrators in their stead.

“Other political parties’ mayors are not my responsibility, and they may not see a problem with mayors from their party. But that doesn’t mean that these problematic municipalities won’t face a legal or judicial intervention,” Erdogan told reporters on his plane returning from a trip to Azerbaijan this week.

“Many problems at certain municipalities have come to my attention,” he continued. “Parties that want to solve the problems themselves will do what is necessary. Otherwise, the Interior Ministry’s inspectors may have to act. All of the municipalities are already being examined and monitored. If anything is caught, an intervention will be carried out.”

The focus on municipalities, which enjoy considerable financial resources and administrative autonomy, is an attempt to distract voters from more pressing issues ahead of local, parliamentary and presidential elections scheduled for 2019, wrote Etyen Mahcupyan, a former prime minister’s adviser, in the pro-government Karar newspaper.

“With the current trajectory, the chances of [electoral] success on macro matters is very low. There is a retreat in the spheres of rights and freedoms and the Kurdish issue. Foreign policy is jammed and passive, despite efforts to depict otherwise in the media. All of the economic indicators are negative, other than an inflated growth rate and exports [rising] in line with the economic recovery in Europe. So there is a big benefit in the government distancing itself from important issues and reducing it to ‘local’ issues,” Mahcupyan said.

Erdogan has pledged to renew the AKP, in power since 2002, after controversial constitutional changes narrowly passed in an April referendum, endowing Erdogan with extensive executive powers.

Turks may also be weary of a state of emergency in place since a bungled military coup in July 2016. In the ensuing crackdown, more than 50,000 people have been jailed, about 110,000 people sacked from the civil and security forces and dozens of newspapers and nongovernmental organizations shuttered.

“The internal purge seems to be compounding the AKP's problems rather than solving them,” Howard Eissenstat, a Turkey researcher at St. Lawrence University and a senior nonresident fellow at the Project on Middle East Democracy, told Al-Monitor. “The party has become too centered on Erdogan's own personality, his concerns, his whims. It has lost the diversity and, with it, the capacity to connect to the grass roots and raise new leadership. A more open, flexible party would be more adaptive and more capable of meeting local needs.”

More popular than his party, Erdogan appears ready to take such risks. A public opinion survey showed that 44% of Turks approve of the forced resignations — some of which have been reportedly accompanied with threats of criminal investigations.

In power since 1994, Gokcek’s tenure was marked by the destruction of swaths of the Turkish capital’s architectural heritage, and he earned the dubious accolade of “Turkey’s leading conspiracy theorist” for accusing the United States of engineering earthquakes and involvement in the failed coup. He won re-election for a fourth term in 2014 in a contest riddled with irregularities.

News outlets reported Erdogan had threatened Gokcek with a corruption investigation before he stepped down on Oct. 28 on what he said were Erdogan’s orders.

He was followed by Ahmet Edip Ugur, the Balikesir mayor who tearfully denied any wrongdoing when he quit Oct. 30. “When your family, when pressure reaches all the way into your home, [when] there are interventions amounting to threats, the situation has gone beyond something I can endure,” Ugur said. Ugur only agreed to leave after his wife was detained overnight by counterterrorism police, a CHP lawmaker alleged.

Erdogan told reporters he was saddened by Ugur’s remarks and denied knowledge of any threats against him. The Balikesir governor released a statement saying reports Ugur’s wife had been detained were false.

Istanbul Mayor Kadir Topbas stepped down in September after his son-in-law was jailed on charges of funding the movement of cleric Fethullah Gulen and the AKP-dominated city council overrode his decisions.

Now, Erdogan’s sights are trained on the CHP. Last week, a prosecutor opened an investigation into a CHP district mayor in the party’s stronghold of Tekirdag who called the president a “fascist dictator” in a video widely shared on social media. Erdogan said he was compelled to take action to prevent others from casting such aspersions.

“Erdogan's instincts are demonstrably authoritarian. That shows in the way he is attempting to address these issues,” Eissenstat said. “But it also shows the extent to which he still sees himself as a democrat. He might rule as an authoritarian, but he still wants to win as a democrat. The question is whether he is willing to lose like one. And the answer to that, I think, is probably not.”