Following a series of expulsions and forced resignations by the Turkish government, tens of millions of Turkish citizens have seen their elected mayors removed from power only to be replaced with government-selected "custodians." 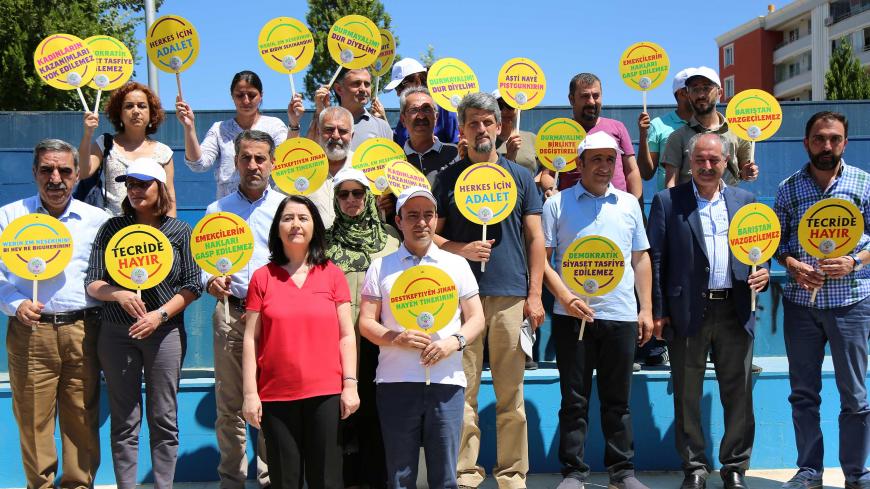 Pro-Kurdish opposition Peoples' Democratic Party lawmakers hold placards in Kurdish and Turkish during a protest against a state crackdown that has seen dozens of mayors and lawmakers jailed over suspected links to militant separatists, Diyarbakir, Turkey, July 26, 2017. - REUTERS/Sertac Kayar

ANKARA, Turkey — Respect for the “national will” has been a hallmark motto of President Recep Tayyip Erdogan, whose ascent to Turkey’s highest post began more than two decades ago from the mayor’s office in Istanbul. Against the many challenges he faced from the secular establishment in the past, Erdogan’s resistance always upheld the notion of the national will. Today, however, he is a president accused of trampling down that national will in a campaign targeting elected mayors, which has stripped almost half of Turkey’s citizens of the local leaders they elected in 2014.

Since the botched coup in July 2016, the Interior Ministry has dismissed the mayors of 10 provincial centers and close to 100 districts in the Kurdish-majority southeast, including the region’s biggest city, Diyarbakir, replacing them with custodians of its own choice.

In September, Erdogan launched an extraordinary purge against mayors from his own Justice and Development Party (AKP). The mayors of six major urban centers, including Ankara and Istanbul, have resigned thus far at Erdogan’s behest.

The provinces that have lost their mayors are home to more than 30 million people, meaning that, on the local level, roughly 40% of Turkish citizens are no longer governed by the people they elected.

In some cases, officials have not even bothered to explain the reasons for the removals. Prominent Kurdish politician Sirri Sakik, who was dismissed as mayor of Agri in March, told Al-Monitor, “They can’t find a single instance of corruption against me. I don’t know why I was dismissed.” Many of Sakik’s Kurdish colleagues, however, have landed behind bars on terrorism-related charges, stemming mostly from remarks and speeches they made.

On the AKP front, the fog of obscurity is even thicker. When announcing their resignations, the mayors simply said they were following Erdogan’s instructions. The party felt no urge to enlighten its electorate about why the mayors had to go. On Nov. 1, Erdogan seemed to offer some hints. “Ultimately, we are responsible for the mayors’ deeds as well. … No mayor is exempt from accountability. We have come to hear myriad things about problems in some municipalities,” he said. “If relevant parties want to resolve the problems themselves, they will do what is required. Otherwise, the Interior Ministry’s inspectors might have to step in.”

For Seyit Torun, the deputy chair in charge of local administrations for the main opposition Republican People's Party (CHP), the president’s remarks suggest that he sees the ousters as an alternative to the prosecution of potential crimes, notably corruption. “Erdogan [actually acknowledged] that some mayors from his party acted outside the law and he forced them to resign instead of handing them over to justice,” Torun told Al-Monitor.

Ahmet Faruk Unsal, a former AKP lawmaker who has fallen out with the party, decried the double standards in the process. “When the mayors in Turkey’s Kurdish cities were dismissed, custodians were appointed in their stead. Are there separate laws for the mayors in Turkey’s east and west? This contravenes the most fundamental norm of the rule of law. Custodians are being appointed in Kurdish cities, while in the west, municipal assemblies vote [the new mayors] in,” Unsal told Al-Monitor.

For the CHP’s Torun, Erdogan’s remarks amount to a threat to the main opposition. “The president puts himself in the place of the judiciary and is unlawfully threatening our municipalities,” he said.

CHP-run municipalities have taken their share in the form of administrative and judicial probes as the government, so it seems, is seeking to redesign local administrations through its own means. If any CHP mayors are sidelined through the probes, the AKP will maneuver to replace them with its own members.

In the southeast, the custodian mayors — many of them already governors or lieutenant governors in their areas — have terminated distinct initiatives by the Kurdish mayors, including multilingual kindergartens and agencies seeking to empower women. Also lamenting the heavy military presence, Sakik said, “Municipality buildings have virtually become military barracks. The people cannot even enter them.”

Sakik believes the purge represents one of the heaviest blows that democracy has taken in Turkey in recent years. Local administrations are the “cradle” and “main vein” of democracy, he said. “What’s the point of holding elections if the [political] mandate bestowed by the people is treated as null and void?”

Unsal employed the AKP’s own rhetoric to describe the severity of the campaign. “Removing elected officials from office is a coup against the national will,” he said, adding that the alternative is to call early elections. CHP leader Kemal Kilicdaroglu has also urged early elections to stop “the further massacre of democracy,” but Erdogan has rejected the appeal.

So what is Erdogan’s plan?

In this context, the shake-up at local administrations compounds the changes that Erdogan has been making across the political scene, from the Council of Ministers to the AKP’s provincial branches. His extraordinary move against the mayors comes at a time when he is already under fire for meddling with and subduing the judiciary. Unsal worries that more could be in store, pointing to Erdogan’s failed attempt to institute the position of “substitute parliament members.” According to Unsal, the plan is not dead, waiting to be revived “at first opportunity.” Erdogan, he believes, wants to have “substitute parliament members” so he can easily do away with disobedient lawmakers. “He wants to redesign the judiciary, the legislature and the executive on the basis of absolute obedience,” Unsal said. “This state of affairs, however, is not sustainable for Turkey.”

Time will tell whether Erdogan’s latest maneuvers succeed. But if things go awry for him, a spectacular political career that started from the mayor’s office in Istanbul could take a serious blow as a result of how the former mayor has treated many of those who had been voted into mayor's offices and other posts.